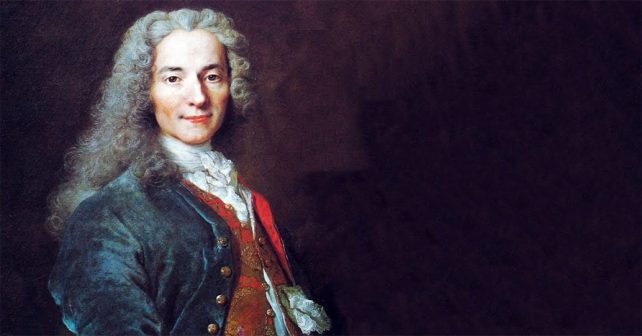 The excerpts from the writings of the French revolutionary writer, Voltaire from the compilation, ‘The Philosophy of History’ that narrates in the chapter on ‘India’, the supremacy of Vedas, the ultimate control exercised by Brahmins over Vedas that are sustained as the culture of Indian territory.

Want created the first robbers; India was invaded for no other reason but because it was rich; and surely a rich people is united, civilized, and polished, long before a society of thieves.

What strikes me the most in India, is that ancient opinion of the transmigration of souls, which in time extended itself as far as China, and into Europe. Not that the Indians knew what a soul was; but they imagined that this principle, whether it was aerial or igneous, successively animated different bodies. Let us attentively observe that system of philosophy which relates to morals. The dread of being condemned by Vishnu and Brahma, to become the most vile and unhappy of animals, was a great constraint upon those of a perverse disposition. We shall presently find that all the great people had an idea of another life, though their notions of it were different. I meet with very few amongst the ancient empires, except the Chinese, who did not establish the doctrine of the immortality of the soul. Their first legislators promulgated only moral law; they thought it sufficient to exhort men to virtue, and to compel them by a severe police.

The doctrine of the metempsychosis imposed another constraint upon the Indians; the dread of killing their father or their mother, in slaying men and animals, inspired them with horror for murder and all violence, which became amongst them a second nature. Thus all the Indians, whose families are not allied, either to the Arabians or the Tartars, are to this hour the mildest of men. Their religion, and the temperature of their climate, rendered these people entirely similar to those peaceable animals which we rear in our folds and dove houses, to destroy them at pleasure………..

The transmigration of souls is a system so simple, and even so probable to the eyes of ignorant people; it is so easy to believe that what animates another, that all those who adopted this religion, imagined that they saw the souls of their relations in all the men that surrounded them: they believed that they were all brothers, fathers, mothers, and children of one another. This idea necessarily inspired universal charity; a man trembled at wounding a being who was of the same family: in a word the ancient religion of India, and that of the literary men in China, are the only ones, wherein men have not been barbarous. How could it afterwards happen that these same men, who looked upon killing an animal as a crime, should allow the women to burn themselves upon their husbands’ dead bodies, in the vain hope of being born again in bodies that should be more beautiful and more happy? Because fanaticism and contradiction are the appendages to human nature.

It should be particularly observed, that abstinence from the flesh of animals, is a necessary consequence of the climate; meat is soon corrupted by its extreme heat and humidity, and is therefore a very bad ailment. Strong liquors are also forbidden, by the necessity of drinking cooling liquors in India. The metempsychosis reached, indeed, our northern countries………

We scarce know anything of the rites of the ancient Brahmins, which are still preserved. The books of the Hanscri, which they have still in this ancient sacred language, give us but very little insight into them. Their Vedams have been as long unknown as the Zend of the Persians, and the Five Kings of the Chinese………………..

The library of Paris has, by a mere lucky accident, procured an ancient book of the Brahmins: this is the Ezourvedam (Yajur Vedam), written before the expedition of Alexander into India, with a recital of all the ancient rites of the Brahmins, intitled the Cormovedam. This manuscript, which is translated by a Brahmin, is not really the Vedam itself, but it is a sequel of the rites and opinions contained in that law. We may, therefore, flatter ourselves that we have a knowledge of the three most ancient writings in the world……

The truth and authenticity of this ritual of the Brahmans, of which I am speaking, cannot be doubted. The author certainly does not batter his sect; he does not attempt to disguise their superstitions, or to give them an air of probability, by feigned explanations, or to excuse them by allegories. He gives an account of the most extravagant laws, with simplicity and candor; human understanding appears then in all its misery. If the Brahmins observed all the laws of their Vedam, there is no monk who would submit to such a state; scarce is the son of a Brahmin born before he is the slave of ceremonies: his tongue is rubbed with rosin mixed with flour; the word Oum (Om) is pronounced; twenty divinities are invoked before his naval skin is cut; but these words are repeated to him, Live to command Men; and as soon as he can speak, he is taught the dignity of his being. The Brahmins were, in effect, for a long time sovereigns of India; and theocracy was established in that vast country more than in any country in the world.

The infant is soon exposed to the moon; the supreme-being is implored to efface those sins which the child may have committed, though he has been born only eight days; anthems are sung to fires; the child, after a hundred ceremonies, is called Chormo, which is the honorary title of the Brahmins.

As soon as the child can walk, his life is passed in bathing and repeating prayers. He sacrifices for the dead; and this sacrifice is instituted, that Brahma may give to the souls of the child’s ancestors an agreeable abode in other bodies…..

There is no function of nature, no action among the Brahmins, without prayers. The first time that the child’s head is shaved, the father says to the razor, very devoutly, “Razor, shave my son as thou hast shaved the sun and the god Indro.” It is possible that the god Indro might formerly have been shaved; but as to the sun’s undergoing that operation, this is not very easy to comprehend, unless the Brahmins have had our Apollo, whom we still represent without a beard.

The recital of all these ceremonies would be as tedious as they appear ridiculous; and in their blind state, they say as much of ours: but there is a mystery amongst them, which should not be passed over in silence: this is, the Matricha Machom (paradise); this mystery gives fresh being and new life.

The soul is supposed to be in the breast, and this, indeed, is the sentiment of almost all antiquity. The hand is moved from the breast to the head, in pressing upon the nerve which we imagine communicates from one of these organs to the other, and in this manner the soul is conducted to the brain. When it is certain that the soul is well hung, the young man then calls out, that his soul and body are united to the supreme being, and says, “I am myself part of the divinity.”…………….

We find in this law the Brahmins’ ten-commandments, and these are ten sins to be avoided; they are divided into three species, the sins of the body, those of the word, and those of the will. To strike or kill one’s neighbor, to rob him, and violate a woman, these are bodily sins; dissimulation, lying, and scandal, are the sins of the world; those of the will consist in evil wishing, in being envious of others good, in not being affected with others misfortunes. These ten-commandments make us forgive all the ridiculous rites. We evidently find that morality is the same with all civilized nations; and that the most sacred customs amongst one people, appear to others as extravagant or detestable. Established rites at present divide mankind, and morality reunites them.

Superstition never prevented the Brahmins from acknowledging an only God…………. We should constantly remember that they enjoyed a terrestrial paradise, and that those who abused God’s bounties were driven out of that paradise.

The fall of degenerated man is the foundation of the theology of almost all nations. The natural bias of man to complain of the present, and praise the past, has made it universally believed, that there was a golden age, to which the iron ages have succeeded. What is still more extraordinary, is, that the Vedam of the ancient Brahmins taught that the first man was Adimo and the first woman Procriti: Adimo, signified lord, and Procriti meant life.