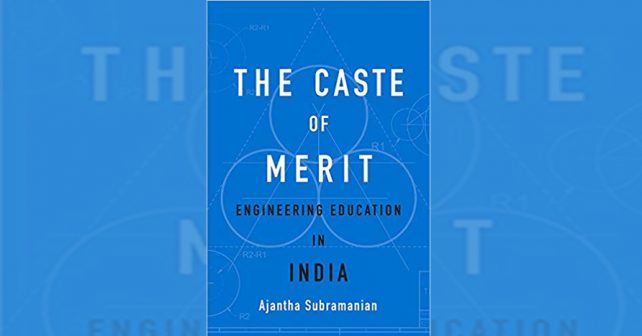 If you are one of those Indians (like me) who scratch their chins in an attempt to understand news headlines about student protests in some of the elite educational institutions in India, this book will help equip yourself with the historical and social context of campus conflicts in India.

Had we not all concluded that the merit-based super-competitive entrance exam system to gain entry into our top educational institutions like the IITs, the IIMs had pole vaulted us over issues like caste that we believed plagued ancient India and kept us back from our true destiny of being a world leading country? The author makes the case that “merit” itself is a not as straightforward as we think, and that caste lurks subtly behind it.  Even if you disagree with the central role of caste in our higher education, as I must confess I disagree, there are many valuable insights in this book.

An example of one of her valid insights is her analysis of a long-standing debate we have been having even in India:

Whether higher education ought to teach specific job-enhancing skills versus mere intellectual empowerment that comes with a study of literature, history and so on. This debate, she points out, has been raging in India since the first engineering college in India, the Thomason College of Civil Engineering was set up by the British Raj in Roorkee, in 1847 in response to the demand for civil engineers to aid the construction of the Ganges Canal in the Northwest Provinces.  But by the time Lord Curzon arrived in India as Viceroy, of the 191 colleges in British India, engineering colleges were a mere four in number – 145 were arts colleges with rest being spread across law (30), teaching (5), agriculture (3), medicine (4), What Lord George Hamilton, the secretary of state, said at that time about the dominance of literary education being “the joy of the Babu and anglicized Brahmin… produces a mass of discontented individuals who, if they cannot find government employment, spend their time abusing the government which has educated them”, rings eerily true even today in the year 2020.

The author also provides an excellent account of the various waves that have driven the growth of engineering education in India.  The first wave, as we noted above, was the demand for “PWD engineers”, to be employed in the public construction efforts of the British Raj.  Then came the pre-Independence 1940s where the driving force for producing engineering graduates was the belief that “a strong industrial base is a precondition for development”.  The 1945 Sarkar Committee recommended the setting up of the IITs and the first. IIT Kharagpur,  was set up in 1951 and soon after that the IITs in Bombay, Madras, Kanpur and Delhi.  You can see the parallel between the Nehruvian-era belief that manufacturing was going to be the key to India’s success with the fervour today for “Make in India”.

The 1950s also saw the beginning of another dimension to the debate about higher education: Whether IITians should in their education be forced to “file, forge, and weld metal and sweat through hundreds of hours of this” or should they focus on achieving “world class” intellectual skills…. adebate which is still going on.

The author’s account of the mass exodus of IIT graduates to the United States in the 1960s and 1970s is another recurrent dimension to the Indian educational debate:  The minor change being IITians now en masse join the IIMs and from there graduate to emigrate to work with Wall Street financial instructions.

The author’s social anthropological eye is then cast on the IIT entrance exam tutorial classes originally centered on Kota and Hyderabad and now spread to many other cities.  The author rightly raises the question whether the IIT entrance exam system which was created to make merit the main criterion for entrance to the IIT’s are in fact (she quotes Pierre Bourdieu here) “exams that conceal social selection under the guise of technical selection and merely legitimise the reproduction of social hierarchies by transmuting them into academic hierarchies?”