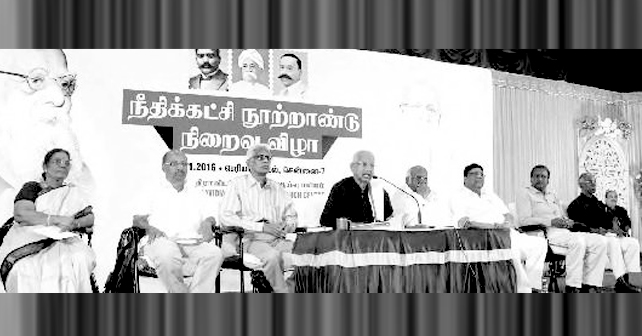 A book in Tamil, “Sir Pitty Theagarayar – Personality of Generosity” published by The Periyar Self – Respect Propaganda Institution was released at the function by Dr.Justice.AR Lakshmanan. The review of the book was made by Poet Nandalala briefly.
The excerpts of the speeches are as follows:

The aim of Justice Party was ‘Justice for all and injustice to none’. Much of the reformative legislations were enacted following which, relevant executive orders were also issued. The lowest in the social hierarchy who are named panchamas in Vedic sashtras were liberated and allowed to walk in public streets, to fetch water from public wells and to use the motorised public conveyance like bus, which had been denied to them earlier. Educational rights to the oppressed were extended during the Justice Party’s Rule under Diarchy of Madras Presidency in 1920s.

There was a peculiar norm to be complied with by the candidates who were seeking admission then to medical colleges. They should have studied Sanskrit language and this norm enabled only a particular sect in the society to become medical doctors. This norm was removed during Justice Party rule when Raja of Panagal was the Premier of the Presidency. Today, we are here with our identity; it is because of the contributions of Justice Party and the parental organization viz. Dravidar Kazhagam.

“When the ruling power of the Congress Party was transferred from Rajaji to Kamaraj in 1952, the political leadership of the brahminical force was completely removed in Tamil Nadu. Even in the saffron political parties, the state leadership is assigned only to the non-brahmins”

Personally, after graduating in Law, I was advised by the then Chief Justice of Madras High Court to do practice as advocate.During the rule of DMK, a political offshoot of Dravidian Movement, I became Government Pleader. In 1990, I was elevated as Judge of Madras High Court. Then for more than eight years, I had served as the Chief Justice of the High Court of Kerala, Rajasthan and Andhra Pradesh and ultimately got elevated as Judge of the Supreme Court of India. After my superannuation, I was appointed the Chairman of Law Commission, a rare role, assigned only to the earlier Chief Justices of India. All these career elevations were possible only due to the pedestal work, laid earlier by Justice Party and also to the continuance of contributions of Dravidian Movement. I express my gratitude to this reformative movement.

In USA, there are exclusive legislations for the welfare of the progenies of the original inhabitants of the continent. In India, the progenies of original inhabitants of this land have to fight for their due rights and its enforcement. India is a country of continental proportions, comprising the population speaking different languages with distinct cultural identities. The sense of belongingness of its citizens to the country must be ensured by extending equal rights to all of them compensating the discriminations, meted out to them historically. In the name of unity of the country no one language can to be imposed on the rest.

The rationale for having commenced the social mission still continues. After the election victory of Justice Party in 1920, 1923 and 1926, it was defeated in 1937, securing 12 seats out of the total seats of 86. Election defeat did not result in the dominance of oppressive Brahmins in the ruling side, as prevailed earlier. Only the non-brahmins in the other parties assumed their role at the helm of affairs in the treasury side. Even in the opposition side, the Brahmins could not decide anything without the support of non-Brahmin functionaries. These facts have been highlighted, not by us but by the renowned research scholars like Prof.N.Subramaniam and Saraswathi. When the ruling power of the Congress Party was transferred from Rajaji to Kamaraj in 1952, the political leadership of the brahminical force was completely removed in Tamil Nadu. Even in the saffron political parties, the state leadership is assigned only to the non-brahmins. This unique feature in the political front in Tamil Nadu was made possible due to the reform – seeds, sown by the Justice Party 100 years ago.