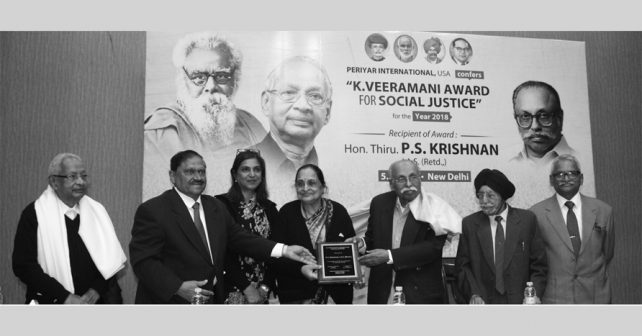 Veeramani Award for Social Justice for the year 2018 was awarded to P.S. Krishnan, I.A.S. (Retd.), former Secretary in the Central Government, without whose yeoman contribution the Mandal Recommendations for social justice would not have come into effect.

In the award giving function organized by Periyar International (USA) held in the Deputy Speaker’s Hall, Constitution Club, New Delhi, on 5th February 2019. Soma Ilangovan, the founder of the award, Before presenting the Award to the dignitary, he went into the circumstances that led to the institution of the award, the cause for which it was awarded and delineated factors that led to its being awarded to P.S. Krishnan for the year 2018.

The special Address for the occasion was delivered by Dr. Bhupinder Singh, IAS (Retd.), former secretary in the Central Government.

In his felicitation address Asiriyar Veeramani recollected that when the Award was instituted by Periyar International (USA) in his name, he had opposed it saying that it would be appropriate to name it after Periyar who had been fighting for social justice for 95 years.  Soma Ilangovan had convinced him that it was instituted in Veeramani’s name to show to the world at large that it was he who was carrying forward the philosophy and projects of Periyar.

Mandal Commission, which was constituted in 1978, had submitted a detailed report in 1980 after eliciting the opinions and recommendations of different people.  But there was still resistance to its implementation from the upper class, political class and the bureaucracy. It was only after marathon warfare by Periyar’s Movement consisting of 42 agitations and 16 conferences and after V.P. Singh took the reins of the Central Government that a G.O. was issued, implementing 27 per cent reservation for the backward classes in Central Services.

It would not have been possible even at that level without the valuable contribution by P.S. Krishnan who was a secretary in the Central government. Without his intervention, the report would have been blocked at the level of the authorities.  It was he who was responsible for the report to come to light.

Even in his retirement days he is showing remarkable interest in Social Justice – and the activities connected with it, and striving for the welfare of the backward and the depressed classes.  Whenever the cause of social justice faces a challenge, Krishnan uses all his experience and knowledge to offer proper clarifications.

Referring to the 10 per cent reservations for the poorer (?) sections among the upper classes, he asserts that the Reservation Policy is meant only for the Backward Classes and not for the upper classes.  Though he was born in a forward community, he stands on the side of justice. Asiriyar expressed in appreciation for his continuous involvement in the cause of social justice.

The function which was instrumental in enlightening Delhi and the northern areas on the cause of social justice concluded with a vote of thanks by a G. Karunanidhy a social justice awardee and activist. 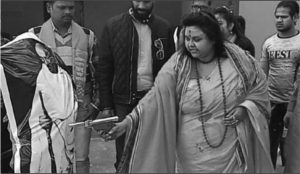 Two bizarre incidents have taken place, both connected as well as different from each other, at the same place, Aligarh of Uttar Pradesh.

It took place on 30th January, Gandhi memorial day, which is observed as Martyrs’ Day, and homage is paid Gandhi all over the country.

On the same day some people chose to pay homage to Gandhi killer, Godse, in an entirely unusual manner.  They belonged to Hindu Maha Sabha, an organization of Hindu bigots who believe in violence and were responsible for Gandhi’s murder in 1948.  They not only keep nurturing their grudge against Gandhi but also their admiration for Godse, who is a hero (shall we say savior?) in their eyes.

An effigy of Gandhi was placed and Pooja Shakun Pandey, a women leader of The Hindu Maha Sabha took her air rifle and shot at the effigy.  She was followed by other members.  Not only that. They had attached a balloon to the effigy from which blood spurted out to the noisy rejoining of the gathering. It was followed by shouts hailing ‘Nathuram Vinayak Godse’.

Of course this madness has met with universal condemnation following which the police have arrested thirteen miscreants including Pooja and her husband.

The incident is not without its reaction.  When the students association of Aligarh Muslim University celebrated the day, an effigy of Godse was burnt.  The 500 students who had gathered there shouted ‘Hail Gandhi’, ‘Down with Godse’ and ‘Down with RSS’.

When interviewed by the press, K. Gautam, the student leader has said, ‘If it is claimed that our slogans had hurt the feelings of Godse supporters, what about the burning of effigy of Ravana during ‘Dussera’ every year and hurting the sentiments of Dravidians and Dalits?’

What is to be noted here is the atmosphere of hatred and hostility which is being generated by the Hindutva forces emboldened by the BJP-RSS rule.  Why don’t they understand that the entire country is rotting.  It is for the right thinking people to do something to bring the politics of hatred to end.