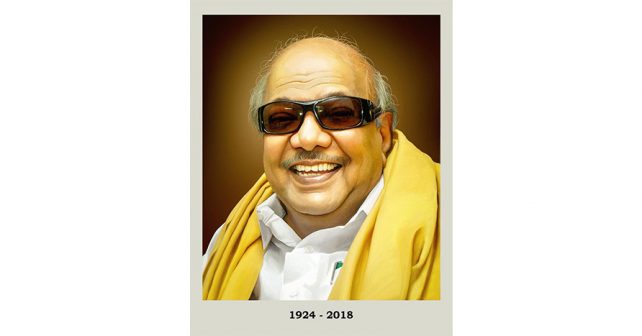 August 7th is the third death anniversary of Kalaignar M. Karunanidhi (1924-2018), the guardian of Dravida Munnetra Kazhagam (DMK). It is under his chiefministership, the State Tamil Nadu had progressed on social, economic and political fronts embedded in the Dravidian Model. Kalaignar grew ideologically in Dravidian Movement, groomed by Thanthai Periyar, by apprenticing in the editorial board of ‘Kudi Arasu’ the official organ of Self Respect Movement, founded in 1925.

Later on Kalaignar chose the political path under the tutelage of  Arignar Anna, the chief disciple of Thanthai Periyar. Kalaignar was one of the frontline stalwarts in the formation and functioning of DMK, a Dravidian party elected to rule Tamil Nadu in 1967. After the demise of the late-lamented chief minister Anna in 1969, Kalaignar assumed the mantle of chief minister. He was the chief minister five times during the half a century rule in Tamil Nadu. Kalaignar nurtured the Dravidian Model, rendering the governance with distinct inclusive ideology. Tamil Nadu, the Cradle of Social Justice, attained greater heights during the rule of Kalaignar, enhancing reservation for the Scheduled Castes and the Scheduled Tribes from 16 per cent to 18 per cent and the Other Backward Classes from 25 per cent to 31 per cent. Sub categorization in reservation that is yet to take off at the country level, was implemented during the Dravidian rule in 1989.

The first judgeship of the Madras High Court was offered to a scheduled caste District judge due to the strenuous efforts of the then chief minister Dr. Kalaignar and the same judge, later on was elevated to the Supreme Court of India as the first judge belonging to the Scheduled Caste.

Higher education was given special focus in the establishment of institutions. The share of students from school education entering higher education is at 49.5 percent for which the foundation was laid by Kalaignar. For school going children apart from imparting free education, welfare measures like free nutritious meal scheme, free travelling pass in buses to attend school, supply of free text books, uniforms to students are of pioneering nature, the result of which has fructified generation after generation.

On women liberation and empowerment, Kalaignar legislated a State Act in 1989 that ensured succession rights for women on par with the male heirs in the property of father.

Kalaignar has acquired special space through the historic legislation for the appointment of archakas hailing from all castes in temples (under the purview of Tamil Nadu Hindu Religious Charitable Endowment Department). The hereditary system of appointment in priest-craft was abolished through the Act. As leader of legendary reputation with die hard fighting spirit he could hear with great satisfaction while he was in the death bed, his envisioned dream became a reality  through the appointment of a duly trained non-Brahmin in a temple at Madurai after the decades long legal battle.  He fought and got for Tamil, the classical language status.

Kalaignar’s identity started with social movement transformed into a politician.  This enabled him to assume authority both in the treasury and the opposition sides alternatively. He was continuously elected to the Tamil Nadu Legislative Assembly. He led the DMK as its President for a half a century, a record that had never been witnessed in any other part of the country as well as the world. Kalaignar in active political life has proved to be a unique statesman.

The creation of ‘Periyar Memorial Samathuvapuram’ in every panchayat union, accommodating all castes in one Block, thereby eradicated the caste system by achieving unity among all caste people without any discrimination.

This is a monumental achievement of his rule towards the goal of a casteless society. The golden rule of Kalaignar carved out the Dravidian Model and that cannot come to an end. It has to last longer than his life. The same has been electorally mandated by the people of Tamil Nadu. At present, the political legacy of Kalaignar is carried forward by M.K. Stalin, the Chief Minister of Tamil Nadu.

Long Live the Memories of Kalaignar!