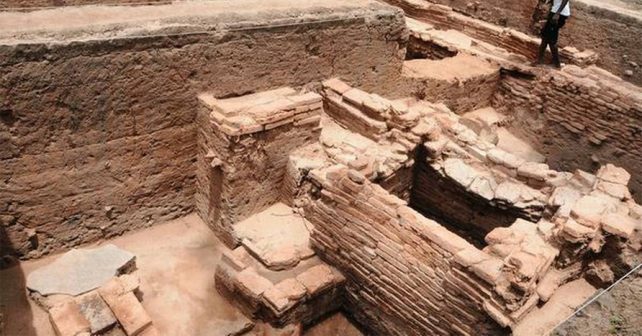 Excavations in the tiny hamlet of Keeladi prove that an urban civilisation existed in Tamil Nadu in the Sangam era on the banks of the river Vaigai. What links did this civilisation have with the Indus Valley Civilisation?

In the last week of September 2019, Keerthi Jeyaraj, Director of EduRight Foundation, flew from Texas, the U.S., to Pallichandai Thidal, a nondescript mound at the far end of Keeladi, a tiny hamlet located 12 km southeast of the historic city of Madurai in Tamil Nadu. The next week, three Sri Lankan Tamils arrived at the same spot. It was their second visit to the excavation site. Also on his way by rail was Chennai-based documentary filmmaker Amshan Kumar. To accommodate these visitors and thousands more, a temporary parking lot was created in Keeladi. A stall selling snacks and coffee sprung up at what looked like a new picnic spot.

An astonishing 1.16 lakh people visited the site between September 20 and October 10. The visitors flocked to the hamlet in curiosity and fascination following the publication of a report by the Tamil Nadu State Department of Archaeology (SDA) on September 18. Earlier, carbon samples from Keeladi had been sent to the Beta Analytic Lab in Miami, Florida, for carbon dating, a widely accepted tool to ascertain the age of archaeological and historical remains. The Lab had found that the cultural deposits unearthed during the fourth excavation at Keeladi in Sivaganga district could be safely dated to a period between 6th century BCE and 1st century CE. These place Keeladi artefacts about 300 years earlier than previously believed.

Findings over the years

The second round (2016) threw up strong clues about the existence of a Tamil civilisation that had trade links with other regions in the country and abroad. This civilisation has been described by Tamil poets belonging to the Sangam period. (Tamil Sangam, an assembly of poets, had its seat in Madurai between 4th century BCE and 2nd century BCE. The works of this period are collectively called Sangam Literature). This round was significant as it provided archaeological evidence about what was found in Tamil literature. Results of carbon dating of a few artefacts, which were released in February 2017, traced their existence to 2nd century BCE (the Sangam period).

The third round (2017) saw a delayed start. First, the excavation report was submitted late. Then the Superintending Archaeologist, K. Amarnath Ramakrishna, was transferred, in a perceived attempt to play down the excavation findings. Keeladi almost faded from public memory as there was no “significant finding” in the third round. This led to criticism that the excavation had been deliberately restricted to 400 metres. On the intervention of the Madurai Bench of the Madras High Court, ASI permitted the SDA to take up further excavation on its own. Thus, the excavations in the fourth round were carried out by the SDA.

A sense of history

The recent dating is very significant, says K. Rajan, archaeologist at the Department of History, Pondicherry University. “Based on radiometric dates recovered from archaeological sites like Kodumanal, Alagankulam and Porunthal [all in Tamil Nadu], we know that Tamili [the Tamil-Brahmi script] was dated to 5th century BCE. But the recent scientific dates obtained from the Keeladi findings push back the date by another century,” he writes in the SDA publication, Keeladi: An Urban Settlement of Sangam Age on the Banks of River Vaigai.

Commenting on the Keeladi findings, Dilip K. Chakrabarti, Emeritus Professor of South Asian Archaeology, Cambridge University, observes in an e-mail note sent to Rajan on September 26 that the recent excavations conducted in the State, including in Kodumanal and Porunthal, which have been “strengthened by a large number of radiocarbon dates, have brought about a sea-change in our understanding of the archaeological developments in Tamil Nadu, taking our gaze from megalithic burials and the finds of Roman coins to megalithic habitation sites and their chronological developments.”

The fifth round (2018-19), which ended on October 13, was a game changer. The SDA plunged into “guided excavation” using the Unmanned Aerial Vehicle Survey, the Magnetometer Survey and the Ground Penetrating Radar Survey. “We wanted to blend technology with traditional wisdom in Keeladi. The lessons learnt are significant and the results are good. We are positioning archaeology as a multidisciplinary and transdisciplinary area of knowledge,” says T. Udhayachandran, Principal Secretary, Department of Archaeology. Guided excavation has led to the discovery of a lot of structures this round. The report for this is being prepared.

Udhayachandran affirms that the qualification of Keeladi as an urban habitat cannot be questioned as it reflects all the characteristics of an urban civilisation, with brick structures, luxury items and proof of internal and external trade. An interesting feature of Keeladi is that it has not revealed any signs of religious worship in all the five rounds. Till now, it has been a tale of an industrious and advanced civilisation that celebrated life. The artefacts unearthed at Keeladi are evidence of this. Recent finds include seven gold ornaments, copper articles, gem beads, shell and ivory bangles, and brick structures that point to the existence of industrial units. Structures that could have been used to convey molten metal or filter liquid strongly point to the existence of people who were involved in industrial work.

The SDA report concludes that the “recent excavations and the dates arrived at scientifically clearly suggest that the people were living in Tamil Nadu continuously… and the Keeladi excavation [has] clearly ascertained that they attained literacy or learnt the art of writing [Tamil-Brahmi] in as early as 6th century BCE during [the] Early Historic Period.”

For Balakrishnan, Keeladi is significant for many reasons. It has given evidence of urban life and settlements in Tamil Nadu during the Early Historic Period. It was around this time that evidence for a second urbanisation started appearing in the Gangetic Valley. Keeladi has added greatly to the credibility of Sangam Literature. At the same time, he cautions that we should not feel intimidated by the ‘spatial-temporal gaps’ of 1,300 years and 1,500 km between the Indus Valley Civilisation and Keeladi.

To substantiate this point, he recalls the observations made by K. N. Dikshit in 1939 when he was Director General of ASI: “Considering that the conch shell, typical of the Indus Valley civilisation, and which seems to have been in extensive use in Indus cities, was obtained from [the] south-east coast of the Madras Presidency, it would not be too much to hope that a thorough investigation of the area in Tinnevelly District and the neighbouring regions such as the ancient seaport of Korkai will one day lead to the discovery of some site which would be contemporary with or even little later than the Indus civilisation.” This is exactly what has happened in Keeladi. Twenty-three bangle pieces made of shell and glass were found in the fourth round. Another Director General of ASI, B.B. Lal, had suggested in 1960 a possible link between the undeciphered Indus signs and the graffiti marks on black and red ware pottery of Tamil Nadu.

Courtesy : The Hindu
to be continued in the next issue