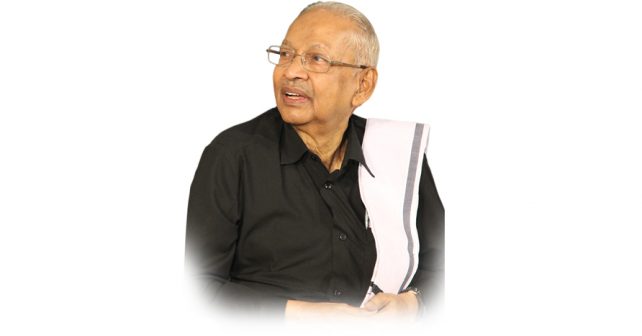 This is the right moment to strengthen our “Social Justice Protection Wing”
To All India Level..! Like minded people..! Unite..!

The Congress Party can rise again if it strengthens and revitalizes its present situation. Let the bell sound of the alarm begin to be heard all around from this moment. This is the appropriate moment to make our social justice protection forces, much more strong and make it reach all – India level. All those who think alike ought to unite for this cause. Thus conveyed his views, Draividar Kazhagam President, Asiriyar K. Veeramani and released his statement which reads as follows:

Assembly Elections for two States Maharashtra and Haryana and by-elections for 51 Assembly constituencies including the TWO in Tamil Nadu and ONE in Pondicherry were held recently and the results have been declared. What should be our political lessons?

The Dreams of the BJP Alliance

The Prime minister Narendra Modi and the union Home Minister  Amit Shah, flattered as election expert, and their allied parties were bragging of a great win and were dreaming of grabbing majority of seats in the two states assembly elections ( Maharashtra & Haryana) and the other by-elections. Even the opinion polls of the media and the exit poll results declared after the elections projected that the BJP alliance would have a great victory and grab most of the seats, and the opposition’s number would be reduced.

The voters have taught the lesson to the chameleons in the BJP who keep shifting their loyalty from one party to another.  They have rightly handed over a defeat to the BJP.  In Maharashtra, the BJP-Shiv Sena alliance has frequently been an alliance facing a rift and a split.

The Prime Minister Narendra Modi and Amit Shah spoke much on ‘hyper–nationalism’ during their propaganda for these assembly elections of the two states. There was also hate – speech about Pakistan and the abrogation of Article 370 that gave special status to Jammu & Kashmir. Citizenship laws and the enumeration process of referendum were made an electoral bet!

There were no references to the burning problems such as economic slow-down, unemployment eradication or the sustained development of the livelihood of the farmers. Remedial measures for these issues or the livelihood struggles of the common people were also not discussed much by them.

But it is crystal-clear that the vote-bank grabbed by Modi and his BJP party six months ago (2019) has fallen to shocking depth.

In Haryana wherein BJP secured 10 seats in the Parliament elections (2019), out of 90 assembly segments, the BJP has won only 79 seats. Similarly, in Maharashtra, out of 280 seats, it had picked up 230 seats.

If compared with the poll results of the 2019 Parliamentary elections, the recently held election results prove a great fall in the vote bank of the BJP.  A very big crack and a large hole are clearly visible.  The support of the voters has declined and the victory level of the BJP has diminished, compared with what it acquired six months ago. For the BJP – it is now the ‘waning moon’ period not the ‘waxing moon’ period.

An Indication That BJP’s Downfall Has Begun:

Fifty one by-elections were held all over 17 states but the BJP alliance could win only 21 seats.  Does it not seem that the downfall of BJP has started? Similarly out of the two parliamentary constituencies, the BJP has won at only one in the U.P. Even in the Prime Minister Modi’s own State Gujarat, out of the six assembly by-elections, the Congress has captured three.

Opposition parties have failed to vie with the BJP by forming an effective co-ordination.  At this juncture, the Congress Party and the National Congress Party (NCP), the Jananayak Janata party (JJP) of Dushyant Chautala in Haryana, Prakash Ambedkar’s Alliance of the suppressed people in Maharashtra ( Jothiba Phule- Ambedkar) etc., have won considerably and drawn everyone’s attention.  Their victory deserves to be highlighted.

The voters have taught the lesson to the chameleons in the BJP who keep shifting their loyalty from one party to another.  They have rightly handed over a defeat to the BJP.  In Maharashtra, the BJP-Shiv Sena alliance has frequently been an alliance facing a rift and a split.  Political critics feel that it is difficult to predict whether a steady Government would be formed there. In most of the reserved constituencies where the poor people, farmers, the underprivileged, backward and the downtrodden live, the Congress Party has won the seats. They were hitherto under BJP’s hold.

The voting public has cautioned the Central Government by an alarm bell sound to give up such unfair actions.  It is quite essential for the media to telecast and publish news in an indifferent manner, avoiding fake news, safe guarding freedom of thought and without concealing the truth.

The Alarm Bell has been struck

At the Center, without mutual consent and discussions, several bills have been passed in the past in an autocratic manner. The voting public has cautioned the Central Government by an alarm bell sound to give up such unfair actions.  It is quite essential for the media to telecast and publish news in a disinterested manner, avoiding fake news, safe guarding freedom of thought and without concealing the truth.  It is the moral responsibility of the print and electronic media.

In Mumbai, Dr. Ambedkar’s grandson Prakash Ambedkar has set a precedent by forming an alliance under the name of Ambedkar – Phule, for the welfare of the suppressed people.   This has yielded fruitful results.  Such efforts should continue and spread on All India level, over all the four directions in the world.

All hope is not lost for the Congress Party.  It can rise if it measures up and takes up steps to stabilize itself.  The alarm sound of alert should be heard everywhere from this moment.  Moreover, this is the apt time for us to strengthen our team for Social Justice Protection.  Like-minded people should join hands and prove that with our synergy we can achieve our goals.

‘THE WANING MOON’
PERIOD HAS BEGUN…

*             A few days before the announcement of the elections, the renowned wrestlers Yogeshwar Dutt, Babita Poghat and Sonali Phogat, a tik tok celebrity had joined the BJP. (it is said that 166000 active followers, follow her posts) They have all been miserably defeated.

*             The daily newspaper ‘SAAMNA’ of Shiv Sena, which contested in alliance with the BJP has stated in its editorial – ‘ The Chief minister who called himself the BJP champion has bitten dust’.

In 3 constituencies, out of 6 in Gujarat,

*             In UP it was defeated in three constituencies, and in one constituency each in Rajasthan,Madhya Pradesh and Chattisgarh.

*             In the Satara parliament constituency in Maharashtra, BJP made a winner of NCP, contest again and caused his defeat as a great achievement!

*             A prominent leader of the BJP Ms. Uma Bharathi has questioned in her statement how the BJP can form a coalition Government in Haryana, with the support of an independent MLA who is facing an accusation in connection with the murders of some women.  She has raised her voice against her own party!