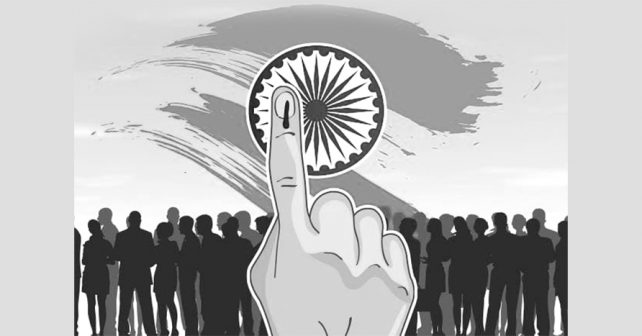 In the recently conducted  elections for the 17th Lok Sabha, the BJP led alliance has won in more than the required constituencies to prove its absolute majority.  Congress Party, the main opposition has failed miserably even to secure the position of  Opposition party in the Parliament.  In nine States, many of them in the North, the Congress Party has no representation at all.  Narendra Modi has to continue as the Prime Minister of the country for the second  tenure. Though numerically BJP holds the absolute majority to govern the country, the mandate given by the electorate is not ‘uniform’, the word that is fond to saffron outfits. Except the Punjab State in the North, invariably all other States has shown dismal, even to say negligible performance by the Congress Party.

The trend of victory of BJP got diluted when it moved  towards the South of the country and it secured  ‘NIL’ in Tamil Nadu, Kerala and Andhra Pradesh.  What made BJP  lose miserably in these three States? Congress joined in DMK led alliance and secured spectacular victory in Tamil Nadu leaving only one constituency to the opposite alliance where in BJP was a part.  BJP was unable to win even in a single constituency despite having contested in FIVE constituencies in Tamil Nadu.  Why  was this debacle  experienced by the BJP ?

BJP won at the country level despite the much debated  obvious failures of the NDA government on economic front that caused heavy stress and sufferings in the life of common man of which agrarian distress was at peak.  Can it be construed as all these economic failures are not noticeable  and   the public was not aware of it much?

Many suffragists had pointed out the lack of unity among the opposition parties to fight against BJP as the cause for their defeat.  Without such co-ordinated fights every prime political party was dreaming for the Prime ministership. Without the strong foundation how can the castle be built? If so, such castles would be built only in air. When all the opposition parties were particular about defeating BJP, their agenda  should have been on ‘who should not come to power instead of who has to come’.  The oppositions  have not carried out the required hardwork to delink religion from politics and transforming the public mind on secular principles. Every party managed to take advantage of religious identities and sentiments to their political gain during the past.  BJP, the prime and able master in that agenda executed it very aptly and it resulted in their unprecedented victory despite the prevalence of harsh and meaningful odds that weakened its rule.  The opposition which played the imitation role of taking advantage of whipping up the religious fervors could not reap the electoral benefits on par with BJP.

The only State in the country where the major opposition parties joined together, decided the strategy and the electioneering mode to reach the destination of success was Tamil Nadu.  Out of the 39 constituencies in Tamil Nadu, election to the one constituency was withheld by the Election Commission, the DMK led alliance with the participation of Congress, CPI, CPM, Muslim League, MDMK, VCK, KMDK has won 37 constituencies. The main reason for this spectacular success was unity among the political parties opposed to BJP that was planned well ahead and executed meticulously  step by step.  The whipping up of the religious identity and pride by the BJP in the State did not make any impact. Knowing full well, the secular culture of Tamil Nadu, in order to break it, Sangh Parivar tried to twist the deliberately carved out religious sentiments on two counts.

Tamil Nadu is being ruled by Dravidian parties for more than 50 years continuously with the initial  basics  laid down by the Justice Party in the British India since 1920.  The secular values have been upheld by the continuous propaganda made by the icon of the Dravidian Movement, Thanthai Periyar E.V.Ramasamy  (1879-1973) making the religious issues secondary to the main social and economic issues that affect the public historically. The political wing of Sangh Parivar, BJP forged alliance with the ruling AIADMK, was keen to whip up the religious sentiments as had been practised  by it in the North.

The article blamed Periyar and its current president K. Veeramani for the degradation in the social life and values. Asiriyar Dr. K. Veeramani, President, Dravidar Kazhagam was the main speaker.  While addressing Dr. K. Veeramani pointed out the eve teasing deeds of Lord Krishna in the river bank by taking possession of the clothes of women who came to take bath in the river.  The quoting of the eve teasing incident was not the making of the speaker but repetition in verbatim as available in Bhagavatham, the scripture of Vaishavite wing of Hinduism.  The speaker challenged  he was ready to face any consequences in case the quoting was precipitated by Sangh Parivar.

After the special meet, Asiriyar Dr. K. Veeramani commenced the election propaganda tour in support of the DMK led alliance opposing the BJP.  While he was on hectic tour, the issue of eve teasing episode of Lord Krishna was racked  up by the BJP and other saffron forces on the ground that it hurt the Hindu sentiments.  “How could the Lord Krishna be belittled?”-  the Sangh Parivar carved out and created problems starting from pelting stones at the electioneering caravan of Dr. K. Veeramani, creating disturbances in DK’s election propaganda meetings, obstructing the conduct of the meeting itself, enabling the law enforcing authorities of the State to deny permission to the DK’s propaganda meeting.  The caravan of DK moved on despite these hurdles .  The main agenda of the Sangh Parivar was to whip up the Hindu religious sentiments in the eve teasing episode of Lord Krishna so that all Hindus would vote against the DMK led alliance but in favour of BJP partnered alliance.

While the electioneering process was going on, a complaint was lodged to take action, on the ‘so called inflicted talk on Lord Krishna’ against the DK leader by a BJP advocate.  Further, a writ petition was filed by the BJP functionary at the Madras High Court.  The Hon’ble High Court after having asked for the reply from the State Government on the issue dismissed the writ petition later.  DK leader pointed eve teasing of Lord Krishna was only reaction and responsive.  The initial blaming by the article published in the Tamil Weekly and the irresponsibility of its saffron minded editor was deliberately masked by the media.

Besides, the Sangh Parivar also tried to twist another episode linked  to the statement of the founder leader of Makkal Needhi Maiyam Party and the popular actor Kamal Hassan. During the course of electioneering, Kamal Hassan  on an occasion, pointed out that Nathuram Godse, the assassin of the father of the nation Mahatma Gandhi as the first Hindu extremist in the independent India.  The statement of Kamal Hassan was projected as an issue, “How could Nathuram Godse be quoted as Hindu extremist, the cause of Hindu terror?”  DK President K. Veeramani said what Kamal Hassan had stated is truth, nothing but historical truth. A lot of criticisms were strictured on the statement.  In reaction, the BJP candidate in the Bhopal constituency Pragya Singh Thakur stated that Nathuram Godse was a patriot of the nation.  The media, both print and electronic , hyped the issue that led to the analysis that the episode would reduce the vote share of DMK led alliance that upheld the secular values. The ultimate motive of Sangh Parivar was to deviate  from the relevant issues against the BJP by whipping up the religious chords.

Finally on 23rd May, the vote counting day, the Tamil Nadu election results proved the tactical agenda of Sangh Parivar insignificant and meaningless with the victory of DMK led alliance, eliminating BJP not to win even a single constituency of the FIVE, it had contested.  What a contrast political and election climate and culture prevailed in the Northern States including North Eastern States and the deep Southern State, Tamil Nadu.  Such a solid mind set of the electorate  was cultivated not overnight, but during the span of a century of Dravidian Movement.

The earlier historical event wherein the saffron outfits-viz.  Jan Sangh the activists whipped up the same religious sentiments in 1971 General Elections for the Lok Sabha and the Tamil Nadu State Legislative Assembly.  When Kalaignar M. Karunanidhi was the Chief Minister, the ardent disciple of Periyar, DK convened its State level conference in Salem in February 1971, As part of the conference proceedings, a public procession was organized with due permission from the authority. The display of many pictures, posters etc in the caravan projecting the ideals of the Periyar’s humanist movement was on.  In order to insult Periyar who was travelling in the precession of the carvan, the saffron outfits threw a chappal on him.  By the time the chappal reached, Periyar moved out of the target range.  The thrown up chappal fell on the Black shirt cadres who marched in the procession.  The cadres seized the chappal and in retaliation they started to beat the Lord Rama picture displayed in the caravan.

After having ignored the incident for two days, the saffron outfit started to twist the issue as DK had hurt the religious sentiments.  Media, at that time it was limited only to print media, projected the issue alarmingly.  “Are you going to cast your vote to those who are with the Black shirts who beated Lord Rama?”

This was the vital election propaganda made by the parties opposed to the then DMK led alliance.  The hyped issue ended in fiasco.  The election results were announced-DMK winning 184 assembly seats out of 243, comfortably exceeding its earlier strength of 138 seats secured during the elections held in 1967.  What do the incidents twisted with religious flavor reveal?  In 1971 elections, the twisting of ‘Lord Rama’ issue boosted the strength of the DMK from 138 to 184.  In 2019 elections the twisting of ‘Lord Krishna’ issue boosted the strength of DMK led alliance to 37 out of the 38 constituencies where the elections were held.  The twisting of religious mongers were ignored by the electorate in Tamil Nadu, the Land of Periyar. The genuine secular sentiments got reflected in the election results in Tamil Nadu, that is entirely different from the rest of the country.  The secular values must be held high for the smooth and harmonious living of the fellow citizens. Religious affairs must be limited to individuals ; it has nothing to do with public matters The secular State must be cognizant of it besides bringing out measures to the secular way of public life in the country.