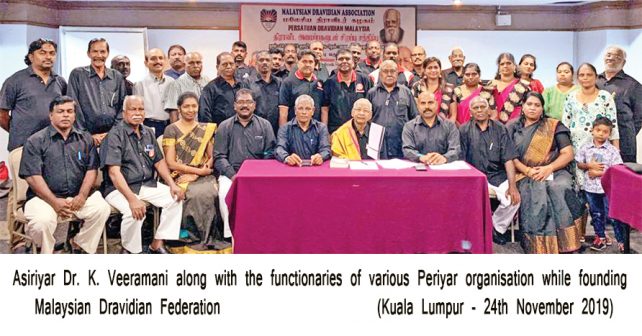 The humanist revolutionary, Thanthai Periyar visited Malaysia (then FMS- Federated Malay States) in 1929-30 on his first foreign tour.  The tour of Periyar was not meant for pleasure seeking and sightseeing.  The migrated Tamil (Dravidian) population from Tamil Nadu and other southern part of British India toiled hard as plantation workers in Malaysia.  Periyar advised that toiling population to realise their self respect and come up in their life.  The main concern of Periyar was that humans must be treated as humans by fellow humans.  That became his Self Respect philosophy.

The Malaysian Dravidian population were attracted towards the appeal of Periyar and slowly started to live by being treated as humans.  They formed an organisation at their level to adhere to the humanist principle of Periyar.  Periyar visited Malaysia again in 1954-55  On the two occasions, Periyar was accorded warm reception with jubilation by the Tamil population of Malaysia.

The humanist propaganda made by Periyar in Malaysia had much impact on the progress and advancement of Tamils and in their life style.  Now the posterity of those generations have identified themselves as dutiful citizens of Malaysia and contribute for the development of their nation, Malaysia.

As a follow up of Periyar’s visit and propa ganda, Malaysian Dravidian Association was formed with due registration with the Malaysian Government Authority .

Recently, Asiriyar Dr. K. Veeramani, the ideological disciple of Periyar and President of Dravidar Kazhagam, Tamil Nadu, India visited Malaysia and appealed to the joint functioning of all the followers of Periyar philosophy.  Realising the need, all the organisations joined and formed a federation.  The foundation function of the federation was held on 24th November 2019, at Kuala Lumpur, Malaysia.  Asiriyar Dr. K. Veeramani presided over the meeting.  The functionaries of Malaysian Dravidian Association – S.T. Annamalai, Pon. Ponvasagam , S. Bharathi, Malaysian Humanistic Advisor- R.S. Muthiah, Naga. Panju, Malaysian Self Respect Movement – K. Vasu, Dr. Krishnan, Periyar Propagandist Centre – V. Amudhavanan, A. Allimalar, K.R.R. Anbalagan, M. Govindasamy and may other black shirt cadres participated.  All of them resolved to function jointly wherever possible for the cause of propagating the humanist philosophy of Periyar.