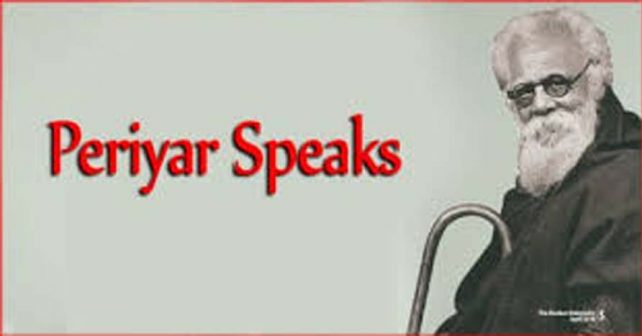 Pregnancy is the enemy of women for leading an independent life. It stands in the way of their liberation. I feel that ladies should completely give up begetting children. Not only women, even men lose their independence and freedom, when they go on producing more and more children. For bringing up the children, the parents are forced to lead an indecent, selfish and dishonest life. Indiscipline is the result of more children to the parents.

In the world, people forego their independence and work hard as slaves to eke out their livelihood. When the burden is increased further more on account of begetting more children, how could there be a place for freedom and liberty?

Not only that, because of shouldering the responsibility of safeguarding children, our womenfolk become sick and weak. They get the symptoms of old age much earlier than men. My feeling is that propaganda should be made not to desire for more children. This propaganda is more important than the propaganda for the eradication of contagious diseases.

People must be made to realise that it is in every respect a hazardous thing to give birth to children, when the parents are quite unable to find adequate resources to protect the children. It is foolish to argue that growth of population in the world will be affected by stopping the evil of bringing forth more children. When the couples indulge in sexual life beyond the limits as mere beasts, many diseases overtake them and it also affects the health of children. Except the human beings, no other living beings have intercourse in a crude manner and that too with the objective of begetting young ones. Man takes pride to call himself a rational being and yet he is immersed in a lot of foolish notions and indulges in many acts foolishly. He craves to have children as his property and as a means to go to Heaven. Ultimately he is faced with unwanted worries. He becomes a source of trouble to the society. There is no other gain!

Our women become timid and behave as slaves, as they falsely think that it is their onerous responsibility to give birth to children and take care of them. While the lot of our women is deplorable and while we find the problem of unemployment increasing and causing grave concern to the troubled society, I think the family planning scheme (limiting the number of children) is absolutely indispensable. It is the right solution for making the people live happily.

In future, birth of children will be reduced considerably. Similarly deaths would be rare. Now a man can live for hundred years easily. Everyone would limit children to two only. No one should be permitted to exceed the limit of two. Sexual relation will not be for bringing forth children. In the new world all citizens would be hale and hearty. They would be strong, intelligent and free. The scientific advancement would be such that the semon (sperm) extracted from healthy individuals would be made quite enough for any lady to conceive. This we see now in the case of cattle. You will find strong and good babies born (what Periyar said 50 years ago has become a reality. Now we read about test-tube babies often). So l am of the firm conviction that the society would be free from the worry of giving birth to children. The society would be free from the trouble of protecting chldren. Parents, would not bother to amass wealth for children. What for man is endowed with wisdom? Is it only to pray to god and beget children? What do we see around us in the world? Should we not go forward and sharpen our intellectual calibre? We could no longer go on thinking about richness and poverty, worries and troubles.

The misconceptions about childbirth should be given up. No man should eternally worry about children. Our people must be freed from such out-moded thoughts.

What strikes to my mind as most important is the complete destruction of caste system based on birth which has created high and low discriminations, as well as superior and inferior status in the society.

The temples as they are, should be made as common halls. There should be no idol of any god.

There should be no place for a mutt-guru (Monastery Teacher) or mutt-leader (Monastery Head). The temple property and the Hindu Monastery property should be taken over by the government.

Temple festivals should be stopped and in their place exhibitions should be conducted.

We should see that all men and women wear a uniform dress and put up a common appearance. Excepting the buildings of factories in the cities, all other houses in the cities must be brought under a wise scheme for housing the people properly. It should be rationally built to save space. We should reduce the cost of building houses. The words used to call individuals with disrespect and disgrace should be given up.

We should allow all men and women to exercise their individual right to choose their life partner.

Elementary education must be imparted to all children before the age of ten. A pass in S.S.L.C. (Secondary School Leaving Certificate) examination should be deemed as quite sufficient for getting any post in Government public services. The discriminatory fixation of scales of pay should be revised.

Providing facilities for unwanted things should be rectified.

Profit level must be specifically brought down.

No one should be allowed to wear or possess jewels beyond a particular ceiling.

Private individuals should not be permitted to carry on money lending business.

Civil supplies, textile stores should be brought under the control of the local boards or co-operatives or the Government.

In the teaching profession 75 per cent should be reserved for ladies only.

If the husband of a lady teacher is also a teacher, he may be given special preference to work together with his wife in the same place.

The government should build and own as many houses as possible. For that sake, a separate department may be created with adequate budget allocations running to lakhs of rupees.

Training should be given for more and more masons and carpenters.

In the forests trees should be cut only according to the required size.

If machinery is introduced in the carpentry work, 500 carpenters could prepare 1000 windows and 1000 doors in a day. A machine is able to cut and shape wood frames in a shorter time, without the need of hard manual labour. Carpenters’ work is made light. They have to simply join the bits and fix the frames.

Similarly even in the field of construction of building by introducing modern, we can easily build a lot of houses.

In ten years we can solve the problem of housing easily.

Similarly the government could undertake to manufacture water pumps, motors, oil engines and hire them out for agriculture and other purposes. If we plan to create a separate department for everything we will not be having the food scarcity or dress shortage or housing shortage.

By all these, we could eradicate the unequal status prevailing in the society. There will be no worry about any scarcity or shortage.

Contentment, happiness, unity and love, would be pervading the society gradually. Anti-social acts as plunder, robbery, cheating, betrayal, vengeance and other harmful things in the society would begin to disappear.

You may give any name to that sort of society l wish to see.

All that l would say is that no rational human being could tolerate the present state of affairs. It is a disgrace, if we do not try to bring in a new social order.