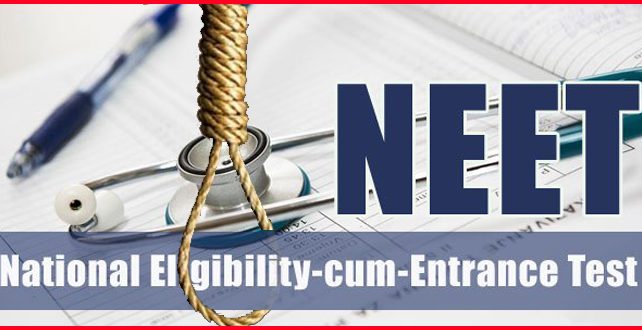 The real impact of NEET, which has been unconstitutionally pushed down the throat of medical education, is that it is anti-poor, anti-minority, anti-federal and anti-constitution.

Given the huge diversity of India and its federal system, the Constitution was interpreted to allow states to conduct exams for their government seats. Various universities and colleges conducted their own tests. Similarly, minority institutions were constitutionally protected and held their own tests.

All educational regulatory agencies are riddled with corruption (for example the AICTE, MCI, to a lesser extent UGC). The MCI has a powerful dispensation to grant permission to start colleges, decide whether they can continue their quota of students, determine whether these institutions can expand their activities and hear complaints. The MCI was so corrupt that in 2011, the council was replaced by a board of governors. When this ‘takeover’ ended, the MCI was up to its own corrupt ways which continue till date. Parliament’s report of 2015 showed how MCI is deep into ineptitude and corruption, and wants to abolish it.

In the Christian Vellore case (2014), NEET was up for a constitutional challenge. There was no doubt that the MCI had the power to coordinate standards which perforce, including giving instructions and guidelines on admission tests. But, even if this was possible, what stood in the way of NEET was the mighty 11-judge bench in the T.M.A.Pai (2002) case, endorsed by 7-judge bench in Inamdar (2005), that had ruled that unaided and minority institutions are entitled to their own selection; not to mention the St. Stephen’s decision (1991) that affirmed that even an aided minority institution could do further selection of students in terms of the aims of the institution. The T.M.A.Pai formula for unaided and minority institutions was autonomy in matters of admissions. Faced with this precedent, the court decided against NEET (Chief Justice Kabir and Justice Vikramjit Sen, with Justice Anil Dave dissenting). There was much rancour even to a point of making accusations of corruption, not to mention that Kabir and Sen were minority judges and Dave a staunch majority judge.

The MCI worked out a plan to support the dissenting view of Justice Dave. The MCI, with support from the union, resurrected NEET – a single all-India test excluding all others despite the fact that Christian Medical College, Vellore (CMC) (2012) struck down NEET. The dissenting judge (Anil Dave) wanted an all-India test even if the law was to the contrary. Since Kabir and later Sen retired, the path was clear for Dave to get the CMC decision reviewed. It went to a Constitution bench presided over by Justice Dave. It was unsuccessfully argued that Justice Dave recuse himself, as also Justice Goel who had wholly read down T.M.A.Pai. Goel also had litigational connections with BJP politicians. Several eminent lawyers argued that there was no basis for review. On April 11, 2016, the Constitution bench made a curious decision that the review of CMC was to be heard. Without hearing the case on merits, the CMC decision was ‘revoked’. When I pointed out in the April 28 order, ‘revoked’ meant recalled to hear, the Court didn’t budge but feigned that CMC was overruled, when the overruling was not even heard. How on earth can a decision be set aside without a hearing.? But Justice Dave was adamant and the other judges agreed. What was to follow was even more absurd. The NEET All-India exam was fixed with a weekends notice on May 1 for over six lakh students. So what if the NEET syllabus was published in December 2015. At that time, NEET was unconstitutional. Now students were expected to be prepared in three days. It was also suggested that all other exams of states and private minority institutions that were in process or scheduled had to be scrapped. If the legislature or executive had done what the Justice Dave presided 3-judge bench had done, it would have been stayed and struck down. Had any high court behaved in this way, the Supreme Court would have struck down that high court decision like a ton of bricks. What made the decision even more farcical was that a few days earlier in the MP case, the Justice Dave-led bench allowed the MCI Council to argue the state’s case (which it had no business to argue) and even suggested that the arguments in that case (where even a judgment was then not delivered) would suffice for the CMC review as well!

Suddenly, the attorney general appeared to save the state exams. The rumour (confirmed by several Tamil Nadu counsel) was that Chief Minister Jayalalithaa was furious. There was a behind-the-scene threat that her party would disrupt parliament. Tamil Nadu recruits from class 12 in Tamil and English. Andhra Pradesh and Telangana protested that they were protected by Article 371D of the Constitution. Christian College Vellore and Mahatma Gandhi colleges had their own exams. Justice Dave said he wanted Gandhian principles to be made compulsory in admission tests but NEET would stay. I reminded him in court that he had said that if he was Hitler he would impose the Bhagwad Geeta on all schools. I have often wondered why Jesus’s sermon on the mount was not chosen.

Perhaps fearful of rebellion from the states, at one stage the three-judge bench had almost acceded to the request of the states to follow their own criteria and tests. In hearings, the longest time was given to Gujarat and Andhra Pradesh. The private institutions also had their own superior exams (take Manipal, the best of the best where years ago Ramdas Pai had not lowered marks to admit his son). Private institutions were given short shrift. But the victory of the states was short lived. Suddenly, the judges did a volte face and decided against the state exams as well. The solicitor general tried to convince the court to allow the states their exams. I protested that if latitude is given to the states it must also be given to minority and other institutions which had constitutional rights in their favour. The reply: “We will hear you if that happens.”

The Central government is being two-faced. At one level, it supports the MCI to nationalise admission tests. At another level, it is under threat from its own coalition partners not to proceed with this draconian policy. NEET goes to the heart of linguistic federalism. Tamil Nadu and other states argue that their 10+2 allows poor Tamil students to be achievers. Many boards throughout the country are not the same as ISC or CBSE, on which NEET tests are based. CBSE devises these tests. True, they will do an MBBS in English, but we are at pre-admission eligibility. An English medium student has an advantage over a vernacular student. The structure of NEET is such. It was conducted only in English and reluctantly in Hindi.

But there is one more consequence. From the famous Kerala opinion (1958), through so many five and nine judge decisions, both linguistic and religious minority institutions were protected. T.M.A. Pai (2002) finally closed all controversy that these minority institutions were free to devise their own tests. It was a great decision drawing on the spirit of India’s multicultural and multi-religious genius. Look what it says.

“The one billion population of India consists of six main ethnic groups and fifty-two major tribes; six major religions and 6,400 castes and sub-castes; eighteen major languages and 1,600 minor languages and dialects. The essence of secularism in India can best be depicted if a relief map of India is made in mosaic, where the aforesaid one billion people are the small pieces of marble that go into the making of a map. Each person, whatever his/her language, caste, religion has his/her individual identity, which has to be preserved, so that when pieced together it goes to form a depiction with the different geographical features of India(to) produce the beautiful map of India… The variations of the colours as well as different shades of the same colour in a map are the result of these small pieces of different shades and colours of marble, but even when one small piece of marble is removed, the whole map of India would be scarred, and the beauty would be lost.”

The NEET decision augurs disaster. It is clearly arbitrary because the CMC decision (2014) overruling NEET has still not been overruled.

The real impact of NEET, which has been unconstitutionally pushed down the throat of medical education, is that it is anti-poor, anti-minority, anti-federal and anti-constitution. Each state should pass legislation to reverse this decision and seek presidential assent to overcome the Supreme Court decision. Let us see what the Modi government will do. Sit on the fence while the Supreme Court bats for it, probably.

Never has the Supreme Court pressed the agenda of a dissenting judge so forcefully and on such shaky foundations.