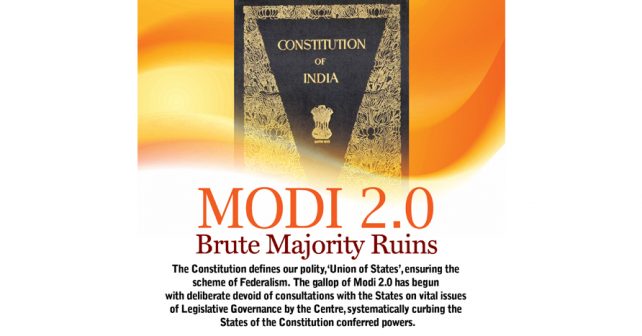 The current regime of the BJP led NDA government under the leadership Hon’ble Prime Minister Narendra Modi has commenced its governance, of course in the galloping pace.  Speedy governance may be a positive aspect but it should not be at the cost of the purpose, it is meant for.

Curbing the Governing Power of the States on ‘Education’:

The first major step was the release of the Draft National Education Policy 2019 on 31st May 2019 after the team assumed office at the Centre on the previous day.

It appears that the report of Kasthuri Rangan Committee was peremptorily kept ready earlier and in order to avoid the debates, discussions and deliberations on it in the public domain. Modi 1.0 did not release it. After securing the ruthless majority in the Lok Sabha, Modi 2.0 has started its game rather its devious plan. The effect of the report, does not impact on only the present.  Since education is concerned with the current generation and the posterity, the influence and impact of the report would prevail over longer period.  For such a magnitude of impact – creating exercise, the Centre prescribed only one month period for the public to give their observations and feedback.  For a country of many languages, cultures, lot many religions and the beliefs of them and the sections of people who deny such religious beliefs, a uniform education policy cannot serve the purpose.  But the saffron rulers at the Centre are adamant in their policy prescription and implementation on the subject, ‘Education’ which mostly comes under the States’ purview and the autonomous bodies like Universities.  The Central Government pretends as if it is democratic in approach by extending the time limit by one more month to entertain the opinion on the Education policy from the public.  Without understanding the voluminous report (484 pages), that too published only in English and Hindi, how could the government expect the opinions from the individual citizens who are not at all versed either, in English or Hindi.  This sort of approach by the saffron rulers at the Centre reveals the undemocratic spirit, exposing on their fastidious fascism.

Stake of the States not duly Respected:

Hasty Passing of Bills in the Parliament:

The Central Government with the Prime Minister Narendra Modi and the team of the Cabinet present many bills at the floor of parliament – Lok Sabha and Rajya Sabha in haste.  Without subjecting the Bills for the full-fledged debates and discussion, the moves are fast to pass them. The treasury bench does not concede the minimal suggestions of sending the Bills either to the Parliamentary Committee or Select Committee or to the Standing Committee for the detailed scrutiny and suggestions by the constituent members.

List of recent Bills denying the stake of States, passed in the Parliament:

The Right to Information (Amendment) Bill: To uphold the democratic fervor and transparency on the part of the rulers, the Right to Information Act 2005 was brought by the Congress led UPA government at the Centre.  The Act was helpful and informative for the citizens to know the core happenings in the governance. The Act further cautioned the rulers to observe a sense of responsibility in the governance in strict terms devoid of diluting the rules and regulations.

To impose curtain in the transparent and free functioning, at present the Centre has presented the Bill to bring down the status of CIC from CEC.  Besides the tenure of the CIC and the salary structures will be decided by the Central government through the proposed amendment.

Further the amendment says, besides CIC, the tenure of States Information Commissioners in various States who discharge their responsibility under the purview of the respective State governments will also be decided by the Centre.  How can they ‘do so without consulting the States and get the views before amending the Act?  More than the exercise of getting the States’ views, the governing style of ‘no need’ to consult on the part of the Centre poses a threat to the federal polity of the country. Now the Amendment Bill has been passed in both the Houses.

The National Investigation Agency (Amendment) Bill: The principal Act viz. The National Investigation Agency Act 2008 was notified, received lot of criticism on its scope of misuse by the Central government. Though the present amendment has been placed and  passed in both the Houses of Parliament the scope of misuse has been explicitly known to every citizen based on the recent past reckless decisions of the NIA that contradicted its own statement made earlier.There remains an apprehension that the amendment is intended to target the religious minorities.  The amendment authorizes the Centre to declare the High Court Benches as Special Courts, the power of which was vested with the States so far.  Besides the crimes related to human trafficking the disbursal of counterfeit currency notes are brought under terrorism: Manufacturing and sale of arms and weapons, the crimes related to explosives so far came under the purview of State governments have been usurped by the Centre through the amendment.  In this regard the State governments were neither consulted nor sought with their concurrence.  Despite the repeated appeal of the Members of Parliament in both the Houses to refer the Bill to Select Committee, the Bill has got passed by the ruthless majority of the ruling front.

The amendment is oriented on two aspects one, the States’ rights are curbed.  Second, curbing the rights of individual.  Any individual can be charged as a terrorist and NIA can arrest him/her. For such arrests NIA need not get the permission from the respective State Police Authority.

The Unlawful Activities (Prevention) Amendment Bill: The Bill introduced in the Lok Sabha has been passed amidst protest from the opposition parties and a walkout by the Congress Party.

The passed amendment bill provides that an individual will be declared a terrorist if he commits or participate in acts of terrorism, prepares, promotes or is otherwise involved in terrorism.The amendment enables the National Investigation Agency to confiscate the property of such ‘terrorists’ and the agency need not seek permission from the States, contrary to the provisions in the existing Act.  The States were never consulted on this count. A total neglect of the States is atrocious.

The Inter-State River Water Dispute Redressal (Amendment) Bill: The Centre has introduced a Bill in Lok Sabha to amend the Inter-State River Water Dispute Redressal Act and ensured its passage amidst protests from the Opposition parties to have due consultation with the States. The amendment enables for the single Tribunal to deal all the inter-state river water disputes.  But the minister said that consultations were made with the States in 2013 and a Bill to this effect was introduced in 2017 in the Lok Sabha and later referred to the Standing Committee for scrutiny.  When the scrutiny was pending, the tenure of 13th Lok Sabha came to end.  After the formation of 14th Lok Sabha, now the Bill has been again introduced and passed without referring for the probable recommendations of the new Standing Committee.  This sort of hasty passage of the Bill is against the principle of Parliamentary Affairs and it shows the attitude of the Central rulers not subjecting the Bill for scrutiny, but pass it unilaterally with the brutal majority it holds.

Reduced Fiscal Share of the States: After the introduction of GST scheme, the Centre has to share with the States a sizeable tax revenue along with the other types of tax revenue.  The 14th Finance Commission has awarded for 42 per cent of gross tax revenue of the Central government to the States.  So far the Central government has shared the revenue below the level of Award by the Commission viz. 34.77 per cent (2015-16), 35.43 per cent (2016-17), 35.07 per cent (2017-18), 33.05 per cent (2018-19) and the budget estimates of 32.87 per cent for the year 2019-20.  It is imperative that, the financial burden of the States were not fully borne by the Centre.  Besides, the Centre has adopted a strategy to collect more of cesses and surcharges over the taxes, the quantum of which need not be shared to the States.  The States have been deprived of revenue mobilization on this front.  The present budget has explicitlycarried out this strategic exercise by increasing petrol and diesel prices only through add up on cess and excise duty that can be fully utilized by the Centre alone denying the benefit of price hiketo the States.

The parliamentary governance is not based on the mere numerical strength of the members in both the Houses, but it has to be ensured through the meaningful debates and discussions by the members over various issues. In respect of the Bills which have to be scrutinized through their subjection to various committees like Parliamentary Committees, Select Committees, Standing Committees etc. The scrutiny has to take place minutely on the referred matters by the Committees. Based on the observations and recommendations of the Committees, the Bills presented in the House have to be refined and passed.  This sort of procedure has been completely ignored in the current regime of the government headed by Modi.  Mere presentation of Bills and for the sake of formality allowing the members to deliberate on it and passing the Bill as such without reckoning the suggestions of the members from opposition side. It has become the routine culture in the current parliamentary governance.

In Parliament or Assemblies certain Bills, pending long would be passed very hastily only on the last day or a few days ahead of the conclusion of the respective legislative session.  That is termed as ‘Guillotining of the Bills’.  That is an exception; strangely it has been adopted as rule rather than the exception!

Is this ‘Minimum Government and Maximum Governance?’ What for the Parliamentary Committees are there?

It is very much dangerous to the Parliamentary democracy.  Ruthless majority at the floor of the Parliament has to be utilized positively by the treasury side instead of ruining the democratic fervor as such ignoring the timely views of the opposition. Otherwise it would lead to a situation where deconstruction carried out by the present rulers has to be set right instead of the new construction required for the nation building in future.