(May 11th is Memorial Day of AnnaiNagammaiar)

History, both Indian and global, seems to be full of examples of revolutionary, larger-than-life men. Often the women in their lives who were equally (if not more) inspirational and radical in their own sense are overlooked by our textbooks, pushed into the margins of history and the periphery of scholarship and are called upon solely when lamenting praises of these men. Nagammai is one such woman.

If you try to look up the name Nagammai today you are going to find only two primary pieces of information. One that she was the wife of ‘Periyar’

But the lack of information about Nagammai says less about her and more about the misogyny that is still ever present in the world of academia and politics. It is almost ironic that such little attention is given to her considering the fact that Periyar Ramasamy spent a major part of his life advocating women’s rights and emancipation from the patriarchal institution of marriage that turns women into slaves.

Unfortunately, most of what is known about Nagammai is in relation to E. V. R. If she did independently participate in other struggles, those who recorded history did not deem it important enough to include. She is not the only female public figure who has been given the short end of the stick in this matter. In fact, Maniammai, Periyar Ramasamy’s second wife too is often found missing from public discourse despite being the first woman political figure from Tamil Nadu after she inherited his legacy as the leader of the Dravidar Kazhagam.

Nagammai was born in 1885 to Rangasamy and Ponnuthai in Thathampatti, Salem in the erstwhile Madras Presidency. Like most women of the time, Nagammai did not receive formal education. She married E. V Ramasamy, who was her cousin, at the age of 13; the latter was 19 years old.

It is popularly believed that Nagammai was raised with a conservative outlook to life and religion and after their marriage Ramasamy, who was an atheist, staunchly opposed to brahmanical tradition compelled Nagammai to come round to his views. As a self-assumed champion for women’s rights, he later gave her full liberty to express her individual views and to act according to her convictions.

Nagammai then immersed herself into Ramasamy’s movements and took part in most of his protests and campaigns including the Temperance movement, in which she played a historic part, the Vaikom Satyagraha and the famous Self Respect Movement.

Nagammai and the Temperance movement

The Temperance movement aimed at curbing alcohol consumption in colonial India. While its origins can be traced back to 1907, it received popular support after joining hands with the nationalist movement. Mahatma Gandhi encouraged Indians to boycott alcohol deeming it a foreign import. It was only a few years later, in 1919 that E. V. Ramasamy, supported by Nagammai, joined the Indian National Congress. The Congress policy of prohibition was formulated at their household under the supervision of Gandhi. Nagammai and Kannammal, Ramasamy’s sister, were actively involved in the process.

When Gandhi announced that members of Congress should participate in the picketing of toddy shops, Periyar answered the call. As a result he was imprisoned in Erode in 1921. Soon Nagammai and Kannammal joined the agitation and helped it gain momentum, forcing the British government to agree to certain compromises. During this time, the agitation turned violent and when Gandhi was asked by frontliners of the Congress to stop the protests he admitted that the decision of stopping the agitation was no longer in his hands but in those of two women in Erode – Nagammai and Kannammal.

She was an active participant and a leader in her own self who fearlessly faced the colonial government and the police unhindered by the prospect of imprisonment.

In his speech delivered in the Kanyakumari District, on 25th and 26th December 1958, Periyar Ramasamy gives a full account of the Vaikom agitation. It was centered in Travancore and aimed to fight against ‘untouchability’ in Hinduism. The Dalits in the region were not allowed to enter the four streets leading to the temple and were forced to walk miles to circumvent the area if they wanted to reach the other side of the complex.

It is believed that Gandhi did not favour the involvement of Non Keralities and Non Hindus, however Nagammai and Ramasamy joined the struggle on April 14th, 1924 and led the movement. A ban was imposed by the Rajah and EVR was subsequently arrested.

In his speech, he says, “It is after my imprisonment, my wife Nagammai and my sister S.R. Kannammal and a few others carried on a state wide propaganda.” Nagammai organised the women’s campaign as part of the Vaikom agitation. This is considered a turning point in history, with women rallying in large numbers for inclusion of all castes in religious institutions. Nagammai, as the leader of the women’s struggle, was arrested in May, 1924.

Nagammai was fiercely dedicated to the anti-caste agenda and attended a number of inter-caste marriages that were held during the Self Respect Movement.

Nagammai and the Self Respect Movement

Nagammai and E.V.R. are best known for their participation in the Self Respect Movement. It was pioneered by S. Ramanathan in 1925 and worked to create a society which extended equal human rights towards members of backward castes. It involved Self Respect Marriages where rituals and mantras by Brahmin priests were forbidden. It aimed at reconstructing marriage into a secular institution, one that simply served as a declaration between life-partners.

The Self Respect Movement however was more than just an anti-caste movement. It propagated deep rooted feminist values. It worked to change the negative public perception of contraceptives. It spoke about a woman’s right to choose her husband and to be equally free to opt for a divorce.

At the helm of this feminist struggle, were three women—Nagammai, Annai Meenambal, and Veerammal. Nagammai is said to have encouraged women from all strata of society to participate in the movement, including former prostitutes and devdasis, wage labourers, doctors and teachers. Nagammai conducted several widow marriages and self respect marriages. She gave speeches at these events, mobilising women to join the cause. It was during this time that she gave her historic speech rejecting the thaali (manga sutra)and various rituals that she considered to be symbols of women’s slavery. 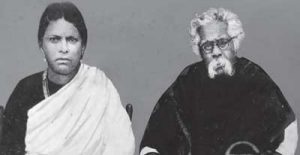 Nagammai and E. V. R. had a daughter who tragically only lived for 5 months. The couple had no more children.

Nagammai died on 11th May, 1933. It was in her obituary, published in Kudi Arasu, which Nagammai herself had briefly edited, that Ramasamy candidly spoke about his inability to fully put into practice his preaching about women’s liberties and rights. He wrote, “I am ashamed to state here that I had not practised even one hundredth of what I wrote and preached about women’s emancipation at home with (Nagammai)”.

While Nagammai herself never received formal education, her legacy is carried on by the various schools in Tamil Nadu named in her honour. The Periyar EVR Nagammai Free Education scheme, introduced by The Government of Tamil Nadu in 2007, helps countless women pursue higher education in the state.

*             Fuzzy & Neutrosophic Analysis of Periyar’s Views on UntouchabilityThe Other Half of the Coconut: Women Writing Self-respect History