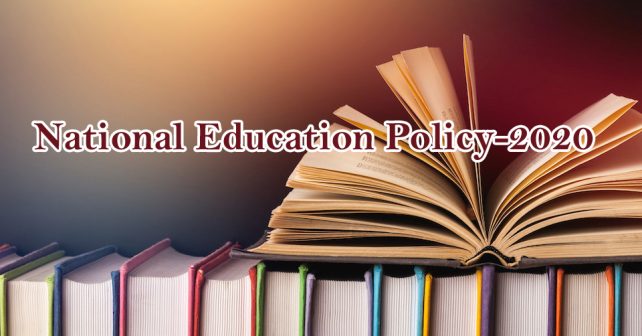 21. NEP suggests to conduct national level entrance test by NTA (National Testing Agency) for admissions to B.A., B.Sc., B.Com., and other degree courses in Arts and science colleges. This will facilitate mushrooming of commercial coaching centres. This entrance test will bring hardship to rural students and seal their future for higher studies.
Regulation of universities including admission is a state subject, under Article 246 of the Constitution of India. State Government and the Universities established by the State Government must be allowed to decide the qualification and admission process in the colleges and universities in a state. An attempt is made to grab these rights by central educational authorities. This is against the constitutional provisions.
Therefore, we opposeNTA conducting national level entrance test for admissions in Arts and Science colleges.

22. The DNEP proposes to retain only colleges with above 5000 students and it boldly states that these reductions in the number of colleges from the present 40,000 to 10,000 (i.e) ¼th will ensure multidisciplinary and research approach to education. Is there any relationship between the strength of the students and research activities? Most of the reputed institutes in our country at present have a student strength less than 5000. So it is only a myth to state that colleges should have the student strength of 5000 + for better research activities.

According to the DNEP’s proposal, atleast about 30,000 colleges will be closed. It means smaller colleges, rural colleges and colleges run by backward class and minorities will be closed. This will put an end to the higher education aspirations of the students of backward classes, and scheduled castes and tribes. Normally students would like to join the colleges near their residences. Most of the students may not be able to spend money to go to the colleges in faraway places. This will only encourage dropouts. Therefore, we rejectthis proposal of fixing 5000 + students per college.

23. The NEP, para 10.4 says that the colleges will give degree certificates to students.
There are about 40,000 colleges all over India; If all those colleges issue degree certificates, it would be difficult for the employing companies to find out the genuineness of the certificates. Moreover, the menace of fake degrees and challenge of tackling them will become quite unmanageable. Further, at present, the rural college students are getting degrees from the recognized universities, which enhance/brighten their chances of employment. On the other hand, the college degree certificates will not be of such help for students to get jobs. This would definitely darken their future.

24. The DNEP, paras 9, 8 and 10.14 suggest that rural colleges which lack infrastructure and education standard would be closed. Those buildings would be utilized as adult education centres, libraries, and industrial training centres. Closure of rural colleges will be a death blow to Gandhian principle that India lives in villages. The closure of colleges is against democratization of education. It will deprive the education rights of rural youth.

25. The NEP, Para 11.9 suggests to offer 3 and 4 years undergraduate degree courses with multiple exit options. If a student discontinues within one year, he/she will be given a certificate. If a student discontinues at the end of the second year, he/she will be given a diploma. Certificates and diplomas given to students who discontinue their studies in the middle, without completing degree course will not be of much use while searching for employment. The introduction of exit option will only help to increase the dropouts.

26. The NEP further says that students who complete 3 or 4 years course will be given degrees. In the employment race both 3 and 4 years course degree holders will be considered equally. The 4 years graduate system brought in addition to the existing 3 years degree system may not bring any extra credit to graduates at degree level.

27. The DNEP advises the cancellation of M.Phil. programme without any valid reasons. As the M.Phil. students study methodology, it would be very much helpful to them when they go for Ph.D. Therefore, M.Phil. programmecan be continuedas at present.

Further the total duration period for both the proposed post graduate programmes is five years (i.e) 3 + 2 or 4 +1 years. Then, what is the need for shuffling of the duration of course like shuffling of playing cards? Will it give any extra benefit to the students?
29. NEP, Para 15.5, talks about offering 1 year, 2 years, 4 years B.Ed., degree courses. It talks about 4 years integrated B.Ed. course, 2 years B.Ed., and one year B.Ed. degree programmes. NEP has not clearly specified the procedures for admissions to 1,2,4 years B.Ed. degree courses. NEP does not mention about post graduate programme – M.Ed – in teacher education. The three kinds of B.Ed degrees may lose their credibility in the employment market.

30. NEP proposes to offer all Ph.D entrants of all disciplines to undergo teacher training programme. This is unnecessary for research scholars.

If so, why should they be closed? All over the world, the trend is to establish separate and specialized universities. It is said that in Russia, there is a separate university for railways alone. The establishment of separate universities for different subjects will boost the research activities and also increase the enrolment of students. Therefore, the suggestion to create multi-disciplinary universities should be dropped.

33. As per para 17.1, the Syndicate, which has been so far successfully functioning in the university will be abolished. In that place, a new body called Board of Governors will be formed. The appointment of members in the initial period has not been spelt out. After the constitution of the Board, the members may elect the Chairperson of the Board or may even nominate an outsider as the Chairperson. The members of the same body will identify the new members and admit them to the Board. Further, the majority members of the Board may pass a resolution against any other member and remove him from the membership. The Chairperson of the board can initiate this process. This will create groupism and infight among the members, spoiling the peaceful academic atmosphere of the university.

36. An undue importance is given in both the DNEP and NEP to Sanskrit, which is spoken only by about 25,000 people. The reports say that Sanskrit was the base for all other languages. This is not the fact. Tamil, the most ancient language in India, can function independently without the help of Sanskrit.

The NEP, para 22-15, declares that the Government will promote Sanskrit colleges and Sanskrit universities. Further, it says that Sanskrit will be offered in school, including it as one of the language options in the three language formula as well as in higher education. The NEP also says that a separate Sanskrit B.Ed. course will be introduced.
The Union Government has already established Rashtriya Sanskrit Sansthan in New Delhi as the nodal authority to promote Sanskrit Language and allotted several hundred crores of rupees for that purpose. This biased approach of the Union Government cannot be accepted. All the 22 languages listed in the VIII schedule of the Constitution should be equally treated and funded.

37. But the approach of the Government to other languages is different. The NEP, para 22-16, attempts to close the Institute of Classical Tamil Language and other similar Institutes and bring them under the control of universities. This will spoil not only the autonomy of these Institutes, but also its research activities. This is nothing but an attempt to stifle the time – honoured classical languages other than Sanskrit.

38. The NEP, para 5.17.proposes promotion and fixation of salary for teachers, on the basis of Performance and appraisal by the head of the institutes, without taking into consideration the experience and seniority. It may lead to bias and partiality in consideration, spoiling the morale of the teachers.

The NEP, para 5.20, suggests the creation of National Professional Standards for Teachers (NPST). This system may lead to favouritism in private management and government schools.

39. The DNEP does not mention anywhere reservation based on social and educational backwardness. In a society, where the majority suffers from social oppression, the DNEP speaks only about merit and merit based scholarships. The concept of merit is an illusory social construct. The DNEP’s approach against social justice is regrettable.

40. At present Examinations are being conducted by the State government, bodies like school education department and universities. But the DNEP says there will be three examination authorities. They are Central Government, State Government and Private Examination Board. Why and how could a Private Examination Board conduct eight semester examinations for students in schools from class 9 to class 12? Examination is a serious, main and final evaluation process in the academic career of every student. This should be done only by teachers and not by outsiders.

41. The NEET examination has already usurped the rights of states in medical admissions. Due to NEET, students studying in state board syllabus, Tamil Medium, Government schools and rural schools are affected very much. In this situation, DNEP has recommended for EXIT (NEXT – National Exit Test) test. This is against social justice, states’ rights and federal system of India. Students are studying in medical colleges recognized by MCI and they pass through various tough examinations conducted by universities of State and Central Governments or Universities approved by State and Central Governments. Then, why should an Exit test be forced on them. The structured medical education and multiple exams conducted during the course of study by approved universities are rendered meaningless by Exit test.

42. Both the DNEP and NEP attempt to centralize the whole system of education in India. To realize this, a spree of institution creation is proposed to be set off, covering the entire gamut of education, starting from RashtriyaShikshaAayog (National Education Commission) headed by the Union Education Minister, which is empowered to take all important decisions with regard to National Testing Agency, General Education Council, Higher Education Grants Commission, National Research Foundation, National Higher Educational Regulatory Authority and others. These are to be the final arbiters in their respective areas of jurisdiction. This will infringe the rights of the state and affect the autonomous functioning of the universities.

43. The DNEP, para 18.4.2, specifically says, “The State Department of Education and State Higher Education Council will not have any regulatory role or administrative control over the higher education institutions”. Thus states are wrapped of their basic rights of providing education to all.

The NEP fails to recognize the federal nature of our country and proposes an all India formula right form anganwadi to university under one national authority. A single, centralized over reaching, micro-managed NEP for a country of multi linguistic and multicultural society is totally unacceptable. No developed country in the world large or small, with federal form of government, has such a centralized education policy.

44. The framers of our Constitution, with a farsightedness, allotted education to State List. But, utilizing thedictatorialpowers during the Emergency in 1976, Education was transferred to Central List. It should be retransferred to State List. That alone will help to solve all the problems affecting our educational system.

45. In short, the DNEP talks about Indian tradition and aims to take the country back to that age old tradition of casteism, suppression of the rights of women, blind beliefs, etc. In fact a forced attempt is being made to establish that Indian culture and tradition which is basically Aryan tradition. Instead of discussing modern science and technology, the DNEP glorifies Vedas, Sanskrit and Sanskrit scholars. Thus, the DNEP attempts to impose Vedic Culture on the whole of India.

We strongly believe that NEP has a hidden agenda. It perpetuates inequality and justifies injustice meted out to the underprivileged. It is disruptive of the unity of the nation. It is psychologically flawed and pedagogically unsound. It is retrograde in the sense that it proposes to take the nation back to the Aryan Vedic state.

Therefore, Sir, we request you to withdraw the NEP 2020 in toto, and appoint a new committee consisting fully of educationists only, to draw a new education policy that will be really democratic, secular, modern, scientific and technological in its character.
With warm regards,