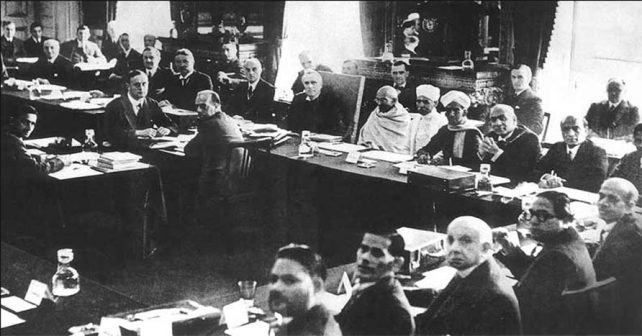 The following is the text of the presentation, made by Babasaheb Dr.B.R.Ambedkar in the 5th sitting of the plenary session of the Round Table Conference held  on 20th November 1930 in London

Mr. Chairman, my purpose in rising to address this conference is principally to place before it the point of view of the depressed classes, whom I and my colleague, Rao Bahadur Srinivasan, have the honour to represent, regarding the question of constitutional reform. It is a point of view of 43,000,000 people, or one-fifth of the total population of British India. The depressed classes form a group by themselves which is distinct and separate from the Muhammadans and, although they are included among the Hindus, they in no sense form an integral part of that community. Not only have they a separate existence, but they have also assigned to them a statute which is invidiously distinct from the status occupied by any other community in India. There are communities in India which occupy a lower and subordinate position ; but the position assigned to the depressed classes is totally different. It is one which is midway between that of the serf and the slave, and which may, for convenience, be called servile with this difference, that the serf and the slave were permitted to have physical contact, from which the Depressed Classes are debarred. What is worse that this enforced servility and bar to human intercourse, due to their untouchability, involves, not merely the possibility of discrimination in public life, but actually works out as a positive denial of all equality of opportunity and the denial of those most elementary of civic rights on which all human existence depends. I am sure that the point of view of such a community, as large as the population of England or of France, and so heavily handicapped in the struggle for existence, cannot but have some bearing on the right sort of solution of the political problem, and I am anxious that this Conference should be placed in possession of that point of view at the very start. The point of view I will try to put as briefly as I can. It is this that the bureaucratic form of Government in India should be replaced by a Government which will be a Government of the people, by the people and for the people. This statement of the view of the depressed classes I am sure will be received with some surprise in certain quarters. The tie that bounds the Depressed Classes to the British has been of a unique character. The Depressed Classes welcomed the British as their deliverers from age long tyranny and oppression by the orthodox Hindus. They fought their battles against the Hindus, the Mussalmans and the Sikhs and won for them this great Empire of India. The British, on their side, assumed the role of trustees for the depressed classes. In view of such an intimate relationship between the parties, this change in the attitude of the depressed classes towards British Rule in India is undoubtedly a most momentous phenomenon. But the reasons for this change of attitude are not far to seek. We have not taken this decision simply because we wish to throw in our lot with the majority. Indeed, as you know, there is not much love lost between the majority and the particular minority I represent. Ours is an independent decision. We have judged of the existing administration solely in the light of our own circumstances and we have found it wanting in some of the most essential elements of a good Government. When we compare our present position with the one which it was our lot to bear in Indian society of the pre-British days, we find that, instead of marching on, we are only marking time. Before the British, we were in the loathsome condition due to our untouchability. Has the British Government done anything to remove it? Before the British, we could not enter the temple. Can we enter now? Before the British, we were denied entry into the Police Force. Does the British Government admit us in the Force? Before the British, we were not allowed to serve in the Military. Is that career now open to us? To none of these questions can we give an affirmative answer. That the British, who have held so large a sway over us for such a long time, have done some good we cheerfully acknowledge. But there is certainly no fundamental change in our position. Indeed, so far as we were concerned, the British Government has accepted the social arrangements as it found them, and has preserved them faithfully in the manner of the Chinese tailor who, when given an old coat as a pattern, produced with pride an exact replica, rents, patches and all. Our wrongs have remained as open sores and they have not been righted, although 150 years of British rule have rolled away.

We do not accuse the British of indifference or want of sympathy. What we do find is that they are quite incompetent to tackle our problems. If the case was one of indifference only it would have been a matter of small moment, and it would not have made such a profound change in our attitude. But what we have come to realise on a deeper analysis of the situation is that it is not merely a case of indifference, rather it is a case of sheer incompetence to undertake the task. The depressed classes find that the British Government in India suffers from two very serious limitations. There is first of all an internal limitation which arises from the character, motives and interests of those who are in power. It is not because they cannot help us in these things but because it is against their character, motives and interests to do so. The second consideration that limits its authority is the mortal fear it has of external resistance. The Government of India does realise the necessity of removing the social evils which are eating into the vitals of Indian society and which have blighted the lives of the downtrodden classes for so many years. The Government of India does realise that the landlords are squeezing the masses dry, and the capitalists are not giving the labourers a living wage and decent conditions of work. Yet it is most painful thing that it has not dared to touch any of these evils. Why? Is it because it has no legal powers to remove them? No. The reason why it does not intervene is because it is afraid that its intervention to amend the existing code of social and economic life, will give rise to resistance. Of what good is such a Government to anybody? Under a Government, paralysed between two such limitations, much that goes to make life good must remain held up. We must have a Government in which the men in power will give their undivided allegiance to the best interest of the country. We must have a Government in which men in power, knowing where obedience will end and resistance will begin, will not be afraid to amend the social and economic code of life which the dictates of justice and expediency so urgently call for. This ROLE the British Government will never be able to play. It is only a Government which is of the people, for the people and by the people that will make this possible.

These are some of the questions raised by the Depressed Classes and the answers which in their view these questions seem to carry. This is therefore the inevitable conclusion which the Depressed Classes have come to: namely, that the bureaucratic Government of India, with the best of motives, will remain powerless to effect any change so far as our particular grievances are concerned. We feel that nobody can remove our grievances as well as we can, and we cannot remove them unless we get political power in our own hands. No share of this political power can evidently come to us so long as the British Government remains as it is. It is only in a Swaraj constitution that we stand any chance of getting the political power into our own hands, without which we cannot bring salvation to our people.

There is one thing, Sir, to which I wish to draw your particular attention. It is this. I have not used the expression Dominion Status in placing before you the point of view of the Depressed Classes. I have avoided using it, not because I do not understand its implications nor does the omission mean that the depressed classes object to India’s attaining Dominion Status. My chief ground for not using it is that it does not convey the full content of what the Depressed Classes stand for. The Depressed Classes, while they stand for Dominion Status with safeguards, wish to lay all the emphasis they can on one question and one question alone. And that question is, how will Dominion India function? Where will the centre of political power be? Who will have it? Will the Depressed Classes be heirs to it ? These are the questions that form their chief concern. The Depressed Classes feel that they will get no shred of the political power unless the political machinery for the new constitution is of a special make. In the construction of that machine certain hard facts of Indian social life must not be lost sight of. It must be recognised that Indian Society is a gradation of Castes forming an ascending scale of reverence and a descending scale of contempt a system which gives no scope for the growth of that sentiment of equality and fraternity so essential for a democratic form of Government. It must also be recognized that while the intelligentsia is a very important part of Indian society, it is drawn from its upper strata and although it speaks in the name of the country and leads the political movement, it has not shed the narrow particularism of the class from which it is drawn. In other words what the Depressed Classes wish to urge is that the political mechanism must take account of and must have a definite relation to the psychology of the society for which it is devised. Otherwise you are likely to produce a constitution which, however symmetrical, will be truncated one and a total misfit to the society for which it is designed.