NEED FOR RAISING RESERVATION QUOTA BEYOND 50 PER CENT 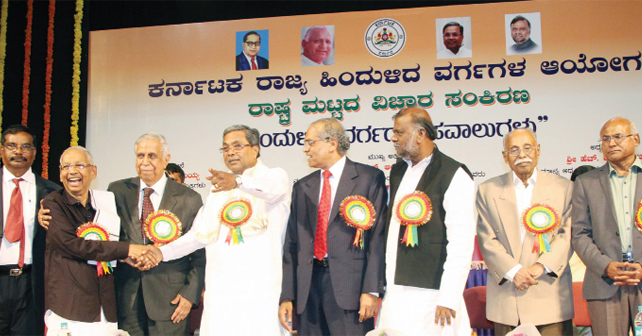 A national level seminar on ‘Challenges of Backward Classes’ was organized by Karnataka State Backward Classes Commission with the support of Government of Karnataka on 25th June 2016, at Ravindra Kalakshetra, J.C.Road, Bengaluru.

After the due inauguration by the Chief Minister, Justice M.N.Venkatachaliah, former Chief Justice of Supreme Court of India delivered a lecture on ‘Extension of Reservation for Other Backward Classes in Parliament and State Legislature’. Dr.P.S.Krishnan IAS (Retd), former Member – Secretary, National Commission for Backward Classes, New Delhi addressed on, ‘Extension of reservation policy to private sector getting benefits from the Government : possibility, impediments and consequences’.

The afternoon session was commenced by Prof.Kancha Ilaiah Shepherd, Director, Centre for the Study of Social Exculsion and Inclusive Policy, Hyderabad. He spoke on ‘Indices of discrimination against other Backward Classes and proposed changes in administration of Social Justice’. It was followed by a lecture,  ‘Advancement of traditional artisans and other occupation communities, Gender Justice and Social Justice’ rendered by Prof. Shantha Krishnan, Professor (Retd), Jawaharlal Nehru University, New Delhi.

The seminar was concluded with the lecture by Dr.K.Veermani, President, Dravidar Kazhagam, Tamil Nadu. Dr.K.Veeramani spoke elaborately on ‘Need for raising reservation quota beyond 50 per cent’. Finally summarization was made by Mr.H.Kantharaja.

The excerpts of the inaugural speech of Mr.Siddaramaiah, Chief Minister of Karnataka

Reservations in education, employment and legislature are one form of compensation for the centuries old discrimination of people. Besides it facilitates the participative democracy, through due representation to all the sections in the society. Whenever further progress is made by providing due reservation for all the oppressed sections in the various layers of the governance a lot of opposition and resistance are exerted by the privileged classes. It so happened when Mandal Commission recommendations were implemented for the representation of Backward Classes is the services of Central Government.  When the agitated masses were questioned they replied that reservation affects their career opportunities. In the name of castes, people were denied opportunities in education and employment for so many centuries, This was not so in case of upper castes people who continue to be privileged in the society. Whatever be the economic background of such suppressed people, they were denied the opportunities. So reservation has to be considered not as an avenue of income earning but its major effect is in the participation of people in the democratic polity of the country.

The excerpts of the lecture on ‘Need to Raising Reservation Quota Beyond 50 per cent’ by  Dr.K.Veeramani, President, Dravidar Kazhagam

Adequate provisions for reservation were created both at the commencement and at later with due amendments to the Constitution. Under these circumstances, the sincere efforts and endeavours are needed on the part of the State to implement the reservation as per the provisions of Indian Constitution.  Saviour of Social Justice, V.P.Singh’s observed in the Parliament on 7th August 1990, when he introduced the bill to implement the recommendations of the Mandal Commission Report.

“Reservation for socially and educationally backward classes is nothing but to afford an opportunity for them in a participation democracy, it wants to give them a position in the decision making of the country, a share in the power structure. What I want to convey is that treating unequals as equals is greatest injustice. Correcting this injustice is very important that is what I want to convey to this House.”

What is the adequacy of representation?

The Report of the Backward Classes Commission formed by the Government of Tamil Nadu in 1971 under the Chairmanship of A.N.Sattanathan, provides the exact meaning of adequacy of representation. According to the Chamber’s 20th Century Dictionary, ‘adequate’ is derived from the Latin root,  ‘adaequatus’ which means ‘to make equal’. Murray’s dictionary gives the meaning as ‘equal in magnitude and extent; commensurate; neither more or less’.

It is therefore, obvious that the adequacy of representation should have some bearing on the magnitude of population of the class which seeks representation or which is to be represented.

Why is there the ceiling of quota of 50 per cent for the total reservation?

People of authority use to quote that 50 per cent ceiling of reservation is not to be exceeded. First time the ceiling of 50 per cent was discussed in M.R.Balaji Vs State of Karnataka AIR 1963 SC 649.

Basically the issue of reservation involved in the case is related to admission in educational institution which comes under the provision of Article 15(4). In the judgment of the Indira Sawhney and Others Vs Union of India SC 273, popularly known as Mandal case, all the mentionings are on Article 16(4), which is related to employment. Hence such mentionings have to be construed as passing reference and do not form the part of the judgment.

The same observation was strongly articulated by learned advocate Mr.Jethmalani, in the case.  According to him, this observation is not a law declared by the Supreme Court within the meaning of Article 141 of the Constitution.

“While 50 per cent shall be the rule, it is necessary not to put out of consideration certain extraordinary situations inherent in the great diversity of this country and the people. It might happen that in farflung remote areas, the population inhabiting those areas might, on account of their being out of the mainstream of national life and in view of conditions peculiar to and characteristic to them, need to be treated in a different way, some relaxation in this strict rule may be imperative. In doing so, extreme caution is to be exercised and a special case made out.” – (Para 830 of Indira Sawhney and Others Vs Union of India and Others)

To what extent can the reservation be made?  – Reservations not to exceed 50 per cent

No maximum ceiling of reservation can be fixed under Article 16(4) of the Constitution for reservation of appointments or posts in favour of any backward class of citizens ‘in the services under the state’. The decisions fixing the percentage of reservation only upto the maximum of 50 per cent are unsustainable.
– S.Ratnavel Pandian, J

What does the Mandal Commission say on the ceiling of the reservation?

“States which have already introduced reservation for OBCs exceeding 27 per cent will remain unaffected by this recommendation” – (Para 13.12 of Chapter XIII – Recommendations of Mandal Commissions Report)

In 1971 When Dr.Kalaignar.M.Karunanidhi was the Chief Minister of Tamil Nadu, the longfelt needs of the socially and educationally weaker sections were fulfilled to a large extent. The reservation for the backward classes was raised from 25 per cent to 31 per cent and of the Scheduled Castes and the Scheduled Tribes from 16 per cent to 18 per cent, thereby increasing the total reservation to 49 per cent.

G.O. No.73 dated 2nd February 1980 of Government of Tamil Nadu, during the Chief Ministership of Late M.G.Ramachandran raised the reservation quota of the backward classes from 31  per cent to 50 per cent.

In 1989-1991, when Kalaignar M.Karunanidhi was the Chief Minister 1 per cent was added separately to the Scheduled Tribes, thereby enhancing the total reservation to 69 per cent.
A Special Act, First of its Kind to protect the then prevailing  Reservation of 69 per cent since 1980  (76th Amendment of Indian Constitution)

To avoid the probable damage to the existing reservation limit of 69 per cent, a landmark event took place in Tamil Nadu with the suggestion of Dravidar Kazhagam. (DK)

The DK suggested a law be passed by the State legislature under Article 31C of the Constitution, as such a law would be beyond judicial review, provided it gets the assent of the President. DK also handed over a ‘model bill’ in this respect. The AIADMK Government headed by Chief Minister Ms. Jayalalithaa enacted a law to safeguard 69 per cent reservation prevailing in the State for SCs, STs, MBCs and BCs. Subsequently a Constitutional Amendment under Article 31B was also made in 1994 placing the Tamil Nadu State Law in the IX Schedule, making it immune from being declared as void on the ground that it conflicts with any fundamental right – the Constitution (Seventy Sixth Amendment) Act 1994. DK was more vibrant for bringing the Amendment under IX Schedule of the Constitution. The history of dispensation of social justice in Tamil Nadu reveals that the total reservation quota can go beyond 50 per cent; still it is continuing as reality.