Not to RISK life of human thro’ the surgery by Ayurvedic practitioners! 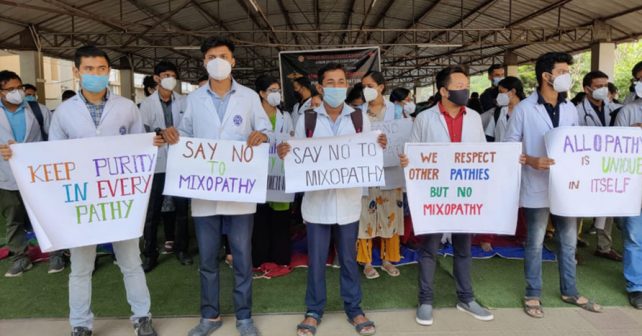 In India too, just like all over the world, there are various systems of medicine like Ayurveda, Siddha, Unani, Sowa Rigpa, etc. which are governed by Central Council of Indian Medicine (CCIM) which is the statutory body that regulates the “Indian” systems of medicine. The CCIM has recently issued a notification in November 2020 relating to Shalya & Shalakya Postgraduate education of Ayurveda. This is said to be merely a clarification of the pre-existing notification of 2016 about a total of 58 surgical procedures that a Postgraduate in Ayurveda needs to be practically trained in such that he/she is capable of independently performing the specified surgeries.

First of all, we must shun the use of words such as Western Medicine, English Medicine, Foreign Medicine, Modern Medicine, Indian Medicine, Hindu Medicine, Islamic Medicine, Chinese Medicine, Oriental Medicine, Traditional Medicine, Complementary medicine, Alternative Medicine, etc. There need not be any adjective before the word medicine. This will lead to the inevitable human bias in judging them (The typical US vs THEM mentality… Whatever is ours is good, whatever is theirs is bad). There is no need for all that claptrap. Something is either medicine or it is not. Simple. If it works, it is medicine; if it doesn’t, it is not. Simple as that. And how do we know if something works or not? There is only one foolproof and reliable way and that is through science. So, whatever ideas we may have (including Ayurveda, Siddha, Unani, etc.), we need to do the science and once it passes a scientific process, it too becomes medicine. That is what Evidence Based Scientific Medicine (EBSM) is. That’s how we contribute. It’s high time we shunned inherent human biases and started behaving as one species, unbound by parochialism, and working under a common human identity for the benefit of all of humanity. Nobody holds any monopoly over science. Anybody can practice EBSM, anybody can learn it and contribute to it. Anybody can build on it and we progress and succeed together.

The echo chamber of the proponents and believers of Ayurvedais a toxic and self defeating vicious cycle of self deception and wishful thinking! Science is anathema to such a system steeped in superstitious thinking that is antagonistic to revision! Primitive ideas like “Pancha Mahabhoota”, “Tridoshas” (Vatadosha, Pitta dosha and Kaphadosha), Saptadhatus, Tri Malas are the foundations upon which this entire edifice is constructed! Consider these for examples – The blood gets it’s redness in the stomach! The semen originates in the bone-marrow! This is a house of cards which is bound to come crashing down when, leave alone the complete scientific storm, even just some fresh air of scientific knowledge is blown on it!

Science is always trying to falsify itself and is a never ending process with internal checks and balances. When something false is identified by this relentless self checking process or is pointed out by someone else, science is thankful for the same and responds with a course correction or even entirely giving up the ideas in toto if needed. No ideas are sacrosanct or no person is an unquestionable authority. Science thrives on doubting, criticism and needed revisions. But, in ancient unscientific systems like Ayurveda, TCM, etc, when countered, the ecosystem typically responds by egregious verbal and intellectual gymnastics, vapid attempts at retrofitting gobbledegook to fit into modern scientific knowledge and resorting to name calling the opponents and all other such logical fallacies! There are even journals for Ayurveda that keep parroting out the same gibberish and try to prove right already believed ideas! The essence of science is the eternal quest to prove it wrong, whereas the essence of pseudoscience is the eternal quest to prove something right!

The belief is that Ayurvedic theories are divine ideas from the gods rendered through the Holy yogis and rishis. It is impossible for such a stagnant belief system to ever improve.

Now imagine an Ayurvedic “Doctor” who purses a Post Graduation in Ayurvedic surgery being trained in two streams MS (Ayurved) shalyatantra – General Surgery and MS (Ayurved) shalakyatantra – (diseases of eye, ear, nose, throat, head and dentistry).Once he/she is allowed to perform surgeries,how effective is that going to be? Even if we believe that surgery was invented by the Ayurvedic proponents long ago, surely we can’t allow anyone to practice the same, can we? Surely, they won’t be doing what was originally done neither should anyone ever even attempt to do the same!

In this light of all the scientific knowledge that we have accumulated and scientific progress that we have made, the so-called Medicine of those days is primitive, not even helpful and potentially even dangerous.

In the field of Medicine and especially in the field of surgery, we have made giant leaps over the past century or two. We have so many sub-specialties because the scope is so vast. Talking of just one organ, the eye, we have so many super-specialties! We have Lid (Occuloplasty), Cornea & refractory surgeries, Glaucoma, Anterior segment, Posterior segment, etc. One specialist cannot do the surgery of the other parts like the other specialist! And mind you, this is just one single organ! We can talk about all the organs this same way. That’s testament to the understanding and progress that we have made over the years.

This new notification of November 2020 apparently doesn’t allow the Ayurvedic practitioners to perform any surgeries other than some 58 specified ones. Even limiting oneself to 58 specified surgeries alone must be unacceptable in a scientific society. Even allowing one should be considered one to many! Anybody can operate, but to do so without complications with the maximal benefit is the big deal! It’s a painstakingly time consuming step by step process. It takes years of studying, years of training and years & years of practice!

India has only 0.7 doctors per 1000 people. The doctor-population ratio in India is about 1:1456 against the WHO recommendation of 1:1000. This is a huge shortfall and the health care needs of the burgeoning population must be addressed. But, it has to be qualitative and not merely quantitative!

The government is doing the right things by trying to increase the number of medical colleges & the intake of students, etc. It will be prudent to continue in this path rather than allowing lateral entry for doctors from other streams like Ayurveda, etc. to be allowed to practice their outdated, primitive, unscientific, pseudoscientific methods. These doctors can be encouraged to join a proper medical college, undergo the proper education and training and come out as qualified doctors competent to do the appropriate surgeries that they would have been trained in. Every human life is precious. Ayurveda and other traditional systems must step forward and indulge in science using their corpus of vast experience and ideas accumulated over generations to reinvent themselves by a wholesome exchange of primitive dogma for the scientific method. The Westerners have given up their traditional ideas and embraced science. Why can’t we do the same? You don’t hear any Westerner clinging on to the primitive ideas of his ancestors like the four humours (“Doshas”) (Black bile, Yellow bile, Phlegm & Blood), do you? Science is universal. Why should you be close-minded and eschew science? This way you’re denying yourself the science which is the only way to knowledge & progress, and actually behaving as if science is a monopoly of the Westerners from whom you tried to cocoon yourself and your obscurantism!

It’s not merely about training someone unqualified to go through a set of routines mechanically. Surgery requires a thorough knowledge of anatomy & pathology. Anesthesia requires thorough knowledge of physiology. Asepsis requires a thorough knowledge of microbiology. Just some of the things out of the huge list that EBSM encompasses – things that Ayurveda (or indeed any other primitive system anywhere in the world) undeniably lack! Without anesthesia and asepsis, surgery is outright undesirable and even dangerous! Ignoring these obvious facts, and encroaching into the turf of EBSM is objectionable and counterproductive. You must practice what you know rather than try and do what you don’t. Leave alone training cobblers/ tailors to do surgeries, or carpenters to fix fractures, plumbers to tackle urinary or the gastro intestinal tract problems. No. No offence to any of these valued professionals… they are all skilled in their own fields and essential and respectful in the society. No doubt this is an extreme view, but pointed out just to make it easier to visualize. The opposition is not only to Ayurvedic practitioners doing surgeries, but to anyone unqualified doing the same. Leave alone all other professionals, it’s not desirable even if proper qualified physicians to do complex surgeries without first undergoing the essential training. Leave alone physicians, even surgeons in one field cannot be expected to do other surgeries. An ENT surgeon cannot do a Cardio-thoracic surgery, an Eye surgeon cannot do a Gynecologic surgery and they don’t even aspire to do so!

Six states in India have a better Doctor: Population ratio that WHO recommended 1:1000. The density in Tamil Nadu is as high as 4 (1:253), almost at the same level as countries like Norway and Sweden! This is the way forward. Let us urge the Union government to carry forward on the right track and increase the number of proper medical colleges, infrastructure, etc and increasing the number of doctors being properly trained rather than indulging in dangerous shortcuts for apparent short term benefits that are fraught with looming dangers in the future. Human resource is the most precious of all the resources of a nation and it is too dear to be squandered away based on ill advised, emotionally charged ideas backed by snobbish pomposity about some imagined corpus of knowledge of one’s supposedly divinely inspired ancestors. Knowledge can never be stagnant and is always marching on. We know more than our ancestors and our future generations will inevitably know more than what we do. The Westerners don’t try to bask in the reflected glory of some imagined glorious past of their ancestors; why should we? By doing so, we shall only be digging the grave of our own progress. Let us seize the initiative now and pursue science rigorously and try and become the world leaders and torch bearers of science. That will be the best homage to our ancestors who started out on the right path.

Let’s remember what James “The Amazing” Randi proclaimed – “We have fought long and hard to escape from medieval superstition. I, for one, do not wish to go back.”