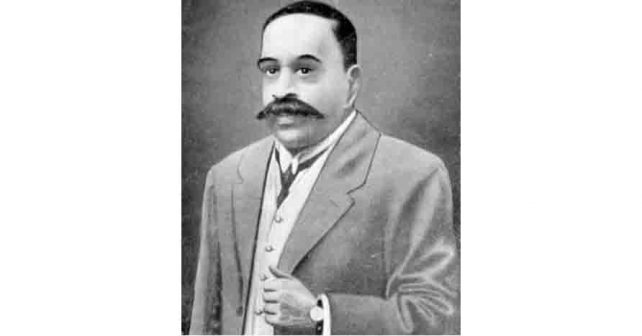 One of the founder – Stalwarts of ‘Justice Party’ 1916

Dr.T.M. Nair delivered his lecture on ‘Our immediate Political Outlook’ before a crowded gathering in the Victoria Public Hall on Wednesday, the 14th March, 1917, under the auspices of the Muthialpet Muslim Anjuman.

I have taken some trouble to follow closely the conditions under which this Home Rule Movement has developed.

Here we are in the country with a large number of politicians, with a political organisation, called the Indian National Congress, to which all leading men in the country are attached. How did it come about that this lady (Annie Besant) in such a short time snatched the political initiative from the hands of the Congress, spread on propaganda her own, captured a good many in the Congress and now began to lead them instead of following them?

How did it come about? The evolution of the Home Rule idea: Madras is unfolded in the pages of ‘New India’.

And if anyone will take the trouble of going back and reading the articles connected with this movement it will repay the industry.

The Home Rule Movement first originated with the attempt to bring about the Congress compromise. You remember that at Surath, in 1907, after a pugilistic encounter between various sections of the delegates, the Congress split up into two sections, which I believe were called extremists and moderates. I believe these were the terms used. And the attempt of 1914 was really to bring about a re-union between extremists and moderates, at all events so it appears to be on the surface. Then this attempt failed, and on the rejection of the compromise proposal, we find in ‘New India’ a threat that, if the Congress still remained in a condition of masterly inactivity, then it will be well for younger people to take action not in opposition to the Congress, which must always be regarded as the head of political activities in India, but as supplementing its work in a field which it does not wish to occupy at present.

In other words, ‘If the Congress “will” not take up Home Rule. It shall.’ That was politically the meaning of it. Then came a series of articles in ‘New India’ on the resurrection of Asia,. and it claims that India should be given Home Rule as a sort of defensive measure against the advance of China. If China becomes a great nation, she may attack India, and India, in order to defend herself, ought to be given Home Rule and made to stand on her own legs. That was the argument put forward.

Then there was a distinct warning in the ‘New India’ of August 1915, that the people should agitate for Self Government and should fight for freedom, and it exclaimed ‘Who will join us’. That is the call for recruits.

Then came an article on the 17th of August, in which she argued that in the reconstruction of the Empire lay the opportunity of India for freedom. The genesis of the thing was the declaration of war, and the whole thing originated several months after England had declared war against Germany and was likely to be pre-occupied in several directions and here is the distinct statement, that the opportunity for India is the reconstruction of the Empire which will follow the war.

But whoever said that there will be a reconstruction of the Empire, Whoever said that any remodification of Indian conditions would never be made. I have never seen any responsible man say that.

On September 13th, a representative of the Associated Press of Bombay had a talk with her on Indian Self – Government. She said that the country must be stirred in the matter, that the Congress should lead in the matter and, if the Congress did not, she should take up the question herself.

She continued to say that, after Congress had formulated a scheme for Self – Government, which she called Home Rule for India the English people being more familiar with Home Rule, and perhaps ‘more opposed too’, the country would be stirred on that behalf.

Then, on the 15th of September, Mrs. Beasant wrote on Congress and Self-Government and wanted Sir S.P. Sinha to claim Swaraj. She attacked Sir Pherozeshah Mehta, evidently the interview was not satisfactory, and said that he had so long dominated Bombay that it was doubtful if anyone else had the courage to lead as well and could be depended upon.

A sick man could not be vigorous or inclined to sketch a vigorous policy for his followers. Bombay had given no sign of preparing the way for Home Rule.

Then, on September 25th, the Home Rule League was born in Madras. Mr. Dadhabhoy Naoroji was said to be the President, but he promptly contradicted it, and since then the Home Rule Movement had gone on.

In 1915, the attempt was made to capture the Congress for the Home Rule Movement. Thanks to the firmness and sagacity of Sir Sinha, than whom a more level-headed politician we had not in India, that attempt failed. It was postponed to the following Congress.

I have no authoritative version of what took place in the following Congress, and, therefore, I shall not venture to speak upon it. It is for the Congress politicians to say, as distinctly and emphatically as they can, whether they are for Home Rule as sketched by Mrs. Besant or whether they are not.

I had tried to ascertain from one or two of my friends, but failed. They said Home Rule and Self-Government are just the same. but slightly different, and so on ; but I could not get anything definite from them ; therefore, it is for them to say whether they are Home Rulers or not.

For us here it is quite sufficient to say that we are entirely against the movement started by Mrs. Besant for Home Rule (Applause), because we are not ready for it.

India Not Ripe Yet For Home Rule

I do not for one moment say that the time will not come when we shall have Home Rule. That time will come (Applause). Neither Mrs. Besant nor Mr. Ahmed Thambi Marakayar or I will live to see it, because it will be long after our time.

There are so many conditions that you have to comply with before you can get it. If we get it before complying with those conditions, it will be ruinous to the country.