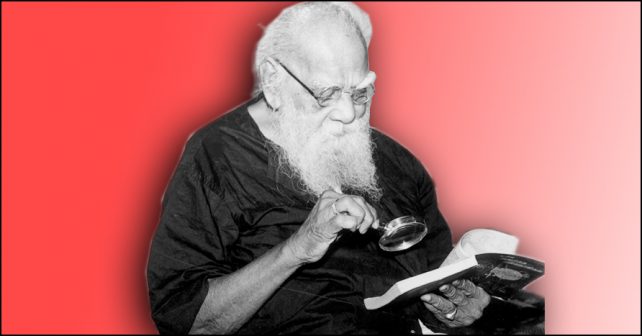 Thanthai Periyar’s birthday is being celebrated every year as an opportunity to propagate his ideology and its relevance to the current scenario. The relevance of Periyar is getting strengthened every year. Many progressive thinkers were not recognized during their lifetime. In case of Periyar it is different. Many of his principles were translated into practice during his lifetime itself and he witnessed the legal sanction accorded to such practices by the rulers. From this regional level acceptance by the people, and legislative sanction, Periyar’s ideology extended at national level. Beyond that now the practice has gone global.

When the revolutionary practices are to be adhered to, they have to start from a specific territory which was in dire need of the uplift of the people inhabited in the territory.

It does not mean that the principles are restricted to such limited territory. The basic tenet of Periyar philosophy is emphasing and kindling the spirit of self respect and rationalism that is inherent in every human so that discrimination created by inequalities would be wiped out for the overall betterment and progress of humanity. Periyar philosophy might have benefitted the limited section of the humanity but its scope and applicability is more wide. Periyar himself has explained when he founded Self Respect Movement in 1925. In the speech delivered by him which was published in ‘Kudi Arasu’ ‘Why was the Self Respect Movement founded?’, Periyar says thus:

“The Policy of Self-Respect Movement has been widely accepted in the world. Its significance, objective and implication have also got world-wide consent.

Man seeks the source of every concept. He looks for the reason and logical basis for everything. He has started a probe even into Nature. Unable to understand the concept of his own life, he leads a life of slavery.

Self-Respect Movement expects man to see the rationale behind everything and reject it as unreasonable if it has no logical basis. Our sensible approach would tell us if our action is right or wrong. One has to weigh the pros and cons and respect the final decision it leads him to. This is the characteristic of Self-Respect Movement. It is against accepting anything blindly.

When a man finds that his thoughts, actions and decisions are right, it must be respected. That is true freedom. There is no difference between freedom and Self-Respect. They are synonymous.”

The traits of Self Respect and rationalism are not the monopoly of any limited section of humanity. They are relevant and could be staked with claim by every human crossing the boundaries of territory, language, socio-political-economic culture.

But the mode of application may differ from country to country, continent to continent and the like.

The relevance of Periyar and his principles has been felt very much in the national scenario of India on social justice front. What he thought of equality of humans, Periyar did continuous propaganda on it well ahead in 1920s and with more intensity after the independence of the country.

The substantial progress in the dispensation of social justice that has taken place in the State of Tamil Nadu (the territory on which Periyar concentrated more due to functional proximity) in India has not started at all in several States. People in those States now realize the need of Periyar for their social and political empowerment.

The immediate need of food arises when hunger is felt intensely. When the already privileged people in the society who are opponents of social justice started to grab the share of the historically under privileged, the need of social justice arose with the fighting spirit advocated by Periyar.

The reservation policy, one of the modes of dispensing social justice, formulated for the upper privileged castes under the garb of economically weaker sections is very dangerous to the cause of social justice itself. Now the oppressed people have started the protest to avail of the space, allocated to them on social justice front. Women’s liberation, propagated by Periyar has borne fruits. It has progressed further to the level of empowerment. Many women occupy today important positions in the governance of the State. This can be attributed to the mission of Periyar for the cause of women-folk.

The wider need of social justice is felt much on the 141st Birthday of Periyar. Globally, the adherence to the principles of Periyar is gaining momentum. No one could disown self respect and rationalism inborn with them.

Only manifestation of self-respect and rational mind set are different among them. The understanding of self-respect and rationalism would be in different perspectives, according to the socio, political and economic conditions that are prevailing in their societies. No one could also deny, the understanding of self-respect and to have rational mind-set will not undermine them; in fact it will uplift their living resulting in their betterment and progress. In that way Periyar’s, ‘Self Respective Humanism’ is the ideal principle that has to be adhered to invariably by all the humans. Humanity would definitely prosper.

International Conferences on Self Respect and Humanism, the second of it is planned at Maryland, Washington D.C., USA under the auspices of American Humanist Association and Periyar International USA on September 21-22, 2019. ‘Periyar 141’ is celebrated globally with the participation of delegates from various countries. The Mission of Periyar, that was criticised by the opponents as sectarian and communal in the beginning has acquired its relevance and application internationally. Global Periyar has become the order and adherence today.