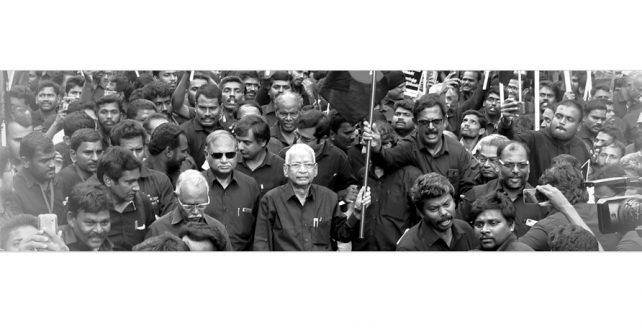 Black Shirt cadres of multitude organizations assembled under the common identity with Periyar principles to oppose the divisive and discriminating ‘Hindutva’ that tries to debase the unity and integrity of the country.

Thanthai Periyar E.V.Ramasamy (1879-1973) is his last public speech dated 19th December 1973, just 5 days prior to his demise, proclaimed that he was prepared to sacrifice his life for the cause of equality among humans, annihilating the caste system that insults major section of the toiling masses in the society.

Periyar identified the causative factor, at the starting point of public life in 1910s, that divided and discriminated the people in our society.  The worst form of birth based discriminations denied self respect under the menacious garb of varnasrama. Periyar revolted against the social insult, inflicted on the vast toiling masses and tried to liberate them from the clutches, that had been binding to them for centuries. As a strong believer, practitioner and propagandist  of  the rationalist principle – ‘All humans are Equal; All resource are meant for All’, Periyar chose the arduous path of public life which many forerunners treaded without forecasting the effect of their journey in longer run.  But Periyar visualized the future and the probable ups and downs and the likely interferences and intrudes, distorting and misleading the path. For the sustained functioning of the cadres, Periyar’s gift was his ideology of self respect and rationalism.  To integrate the cadres on their public endeavours, Periyar gave the identity of ‘BLACK’ (Black Shirt attire) which was widely known in negative sense by the oppressive cult of Brahminism. The negative perception on the identity of BLACK with the Periyar’s humanist ideology has been slowly erased due to the hard and sustained efforts of the cadres of Periyar Movement. Yes; it has been through the propaganda, nothing but perpetual propaganda. The propaganda of Black Shirt cadres is to enlighten the innocent people, enslaved by the microscopic  section in the name of ‘god’ and religion . The inhuman insult branded on the toiling masses by keeping them in the lowermost rung in the social hierarchy is unparalleled in any part of the world.  The precarious position prevailed in the British India has been eroded constructively by the social revolutionaries – Thanthai Periyar, Babasaheb Ambedkar, Sree Narayana Guru, Mahatma Jothirao Phule.

The mode of oppression has changed after independence of the country. The governing code of the country viz.  Indian Constitution has been adopted with the oppressive factor, ‘CASTE’ in many of its provisions. The saffron forces try to bring openly the ‘Manusmrithi’ which enslaved the people as the governing code of the country.  Besides the present rulers at the Centre with the backing of Saffron forces are acting much against the common good but accomplishing the parochial religious agenda of ‘Hindutva’. Manifestation of anti people  ‘Hindutva’ in all the layers of governance is the major achievement of the current Saffron rulers!

The society, if viewed by wearing Periyar lens, the scenario would be visible distinctly. For the first time, all the Periyarists, familiar among the public as Black Shirt cadres from multitude organizations assembled for the ‘Black Shirt Rally’ and ‘Liberation Conference’ at Trichy, the mid city of Tamil Nadu on 23rd December 2018 i.e., one day prior to the memorial day of Periyar (24th December 1973).

Periyar was a non violent rebel and the rally was organized in the same way. The call for the rally was open and the participation of Black Shirt cadres was spontaneous.  The rally was flagged off and led by Asiriyar K.Veeramani, President, Dravidar Kazhagam,  parental to all the organizations of Periyar Movement, founded by Periyar in 1944.

The ideological base of all the participants organizations in the Black Shirt Rally, has derived their functional strength by their non participation in the election process by directly contesting the elections. They are devoid of any aspirations to assume power and authority to rule. The rally comprised of Black Shirt cadres with the age groups ranging from children to the aged cadres raising slogans to keep the identity and culture of Tamils, ensuring the Constitutional rights available to every citizen. The rally passed through a distance of 2 kms. in a self disciplined manner. The police protection for this mammoth rally was very minimal.  Not even an iota of disturbance and unwanted deviations occurred during the entire course of the rally; the law and order authority had no duty to streamline the situation except their formal presence.  The ‘Black Shirt Rally’ reached the venue where the ‘Liberation Conference’ was held.

Conference of ‘Liberation’ : The ‘Conference of Liberation’ was presided over by Asiriyar K.Veeramani. All the leaders of fraternal organizations of Periyar Movement assumed their role in the proceedings of the conference.

Self Respect Marriages: As a part of the proceedings, Self Respect Marriage a symbol of human dignity and equality was conducted to THREE couples who were wedded inter caste without any religious and dogmatic rituals. Many progressive, resolutions to establish egalitarian society were passed at the conference.

Excerpts from a few Resolutions:

The Saffron culture imposed by RSS detrimental to the culture and history of Tamils and the violent atrocities, induced have to be curtailed by the State government by banning RSS in Tamil Nadu.

The unique feature of ‘Black Shirt Rally’ is encouraging the message that despite the differences in organizational approach, in case of need, all the Periyarists would join together to encounter the cultural opponents on ideological ground.  The message is the great achievement in the annals of Periyar Movement that has changed the ‘Land’ more than the significance. The Rally and Conference was signified by the joint participation of activists, intellectual scholars and thinkers of Periyar ideology.