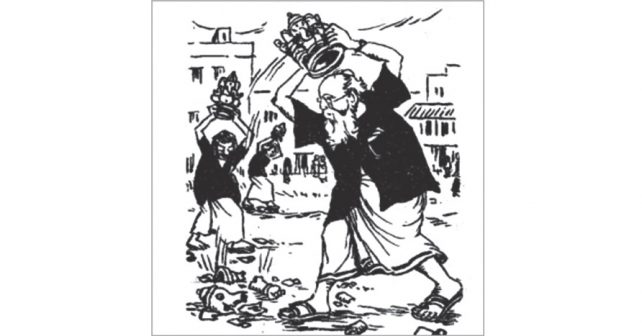 In 1953, Periyar conducted an agitation of breaking the Pillayar (Ganesa) idols, the purpose for which he putforth in the following words:

“We have to eradicate the gods who are responsible for the institution which portray us as sudras, people of low birth, and some others as Brahmins of high birth.  While the former go on toiling, without any education, whereas the latter can remain without exerting themselves.  We have to break the idols of these gods.  I start with Ganesa because it is he who is worshipped before undertaking any task.”

“When I say I am going to break idols no one should think that I am going to do it inside the temples or that I will enter the temple and create a ruckus there.  No one will enter the temple.  We will either ask potters to make idols resembling the god or buy the painted ones sold in the shops.  We will publicise when and where the breaking is to take place, gather people and break them on the roadsides.  I assure that no one will remove or cause any damage to the temple idols.”

Periyar clarifies, “There is nothing to feel surprised or hesitant about breaking Pillayar idol.  Please let me know if there were a better means of expressing our feelings, you sudra ministers, sudra members of parliament and the legislature, educators including vice chancellors, reputed millionaires, scholars, lords, former zamindars, former maharajas, Sri La Sri Heads of mutts!  I am prepared to give a patient hearing to you.”

Periyar chose a day for the idol breaking agitation – 27th May, which was the birthday of Buddha.  The breaking would take place at 6.30 in the evening, he announced.  He said while breaking it, the following announcement must be made. “I am breaking it for having made me born in the low birth, and made me a sudra, a bastard.”

All through the state thousands of idols were broken. A case was filed against Periyar in the court.  In the course of enquiry, the judge Raman Nair asked, “They made Pillayar idols and they broke them.  Why do you question that?” “We had heartburn while seeing Pillayar idol being broken,” was the reply. The judge countered them, “They did not start breaking all of a sudden.  They were propagating for three months.  Why did you foolishly go where the breaking took place?  And get heartburn?”  He dismissed the case.

The religious minded people said that they were happy. “As you go on breaking the idols, the number of idols will increase.  More temples will be built.”

Periyar said, “In that case, everything is fine.  I will give you the idols at my own expense.  You break them and spare me of my strain.”

Periyar made use of the agitation to register his opposition to caste system and varnasarma and to the god who is considered to be responsible for that.