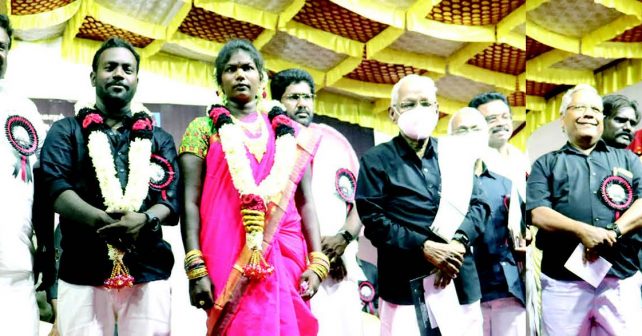 …Continuing from the previous issue
In India, the Brahmin oppressors have been stigmatising the toiling population as ‘Shudras’ as if the subjugation was designed by god ‘Krishna’ himself as sermonized in ‘Bhagawad Gita’, the so called ‘holy’ scripture of the Brahminical religion.

Dividing people and discriminating them is the essence of Varnashra dharma. The overall beneficiary, Brahmin sect is at the top in the graded hierarchy. Even their mantras say that the supreme sect is above even god.

Devadhinam jagatsarvam,
Mantradhinam ta devata
Tan mantram Brahmanadhinam
Brahmana mama devata
In Sanskrit:
देवIधीनंजगत्सर्वमन्त्राधीनंचदेवता |
तेमन्त्राब्राह्मणाधीनांतस्मात्ब्राह्मणदेवता ||
The meaning inferred is that –
“The universe is under the power of god; the god is under the power of Mantras; the Mantras are under the power of the brahmins; therefor brahmins are godly.”
To liberate the enslaved people, Thanthai Periyar started his mission in 1919.Functioning with an already existing organisation was not favourable to the mission of Periyar. In fact, it was a hurdle in accomplishing the social task. So Periyar founded his own Self-Respect League, which later grew as a mass Self-Respect Movement.

The social enslavement has been tormenting the society for many centuries making it integral to the life of people. It has been thrust into the culture, language and other aspects of life. Marriage is an institution in the structure of a family. In that institution, subjugation of women (brides) has been reinforced through the performance of rituals, chanting of mantras in a language unknown to the couple. The real meaning of the mantras affects the dignity of the bride. The performance of marriage by the priestly class reveals only their fake supremacy.

The second aspect of the enslavement of women starts with the traditional, so-called religious marriages making them subservient to their husbands. It is preceded by the stage where women have to depend upon their father. The dependence has been insisted upon through the code prescribed by Manu Smriti: It says –
“In their childhood women should obey their father and be under his care. In youth, they must be subservient to their husband. After the passing away of the husband they must be under eternal vigil of their children. Women should never be freethinking and independent.”      Chapter 5; Verse 148 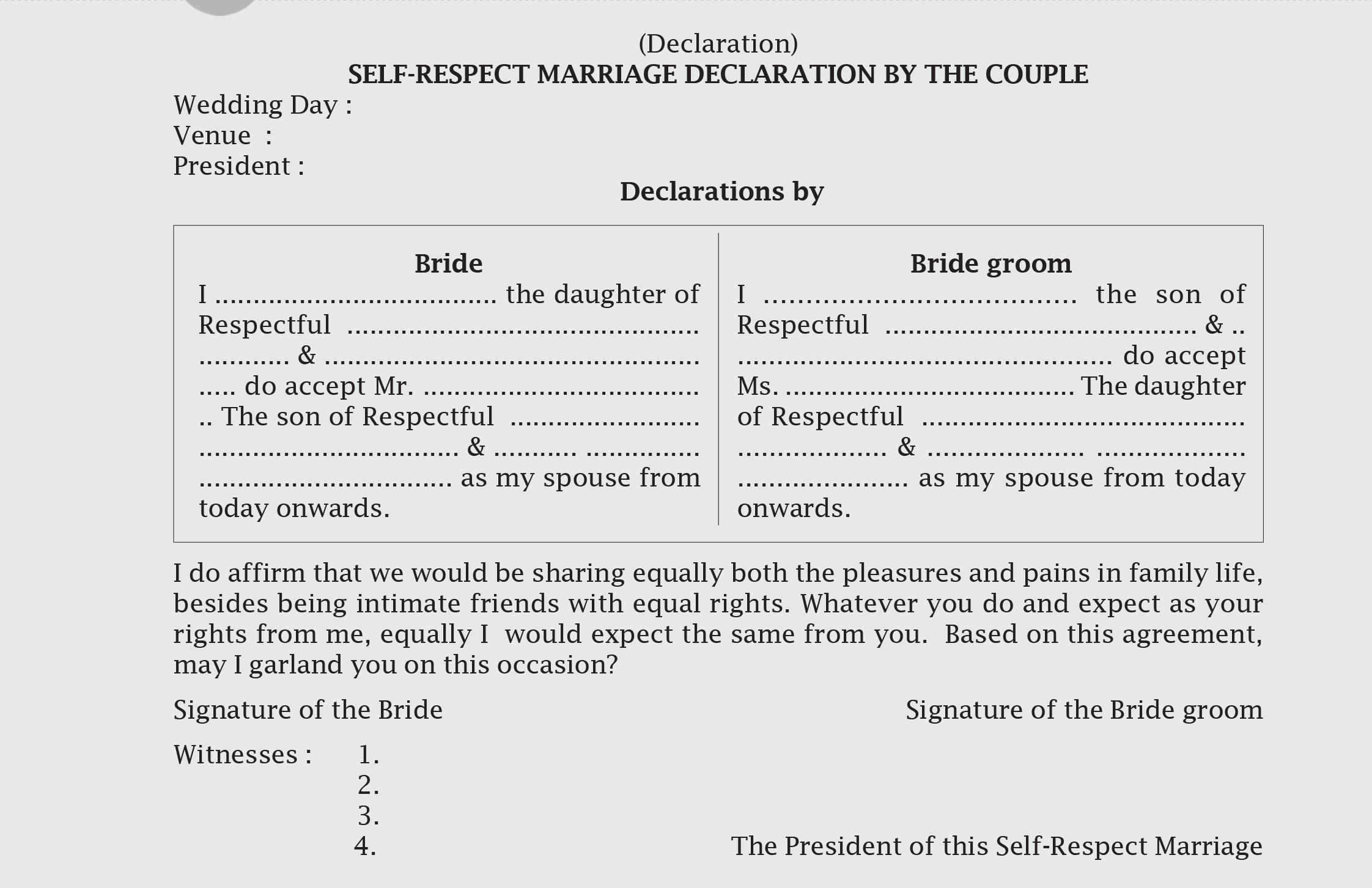 Another uglier part of the mantras degrades the position of women in marriages as brides.
Marriage is being conducted for a male (bride groom) and female (bride) and they are going to be life partners. But the mantra that is chanted while performing the marriage mentions that the bride had already had a prior marital life with semi-gods. The relevant mantra says:

This is the incantation which a priest recites while conducting a marriage. This is the implied content of the recital. What a shameful dictum that belittles the bride!
All these mantras are in Sanskrit, so that the meaning of it could not be understood by the couple and the audience who witness the wedding. In many of the marriages the brahmin priest who chants the mantras himself does not know the meaning of the mantras chanted by him.

The massive revolt against the Brahminical hegemony in the society is one of the means to attack and annihilate it. The root cause is the enslavement of women. Periyar introduced Self-Respect Marriage, devoid of rituals, chanting of mantras and brahmin priest to perform it. The core message of Self-Respect Marriage is Equality of Women and protection of their dignity.

The traditional marriage is generally said to be solemnised by divine forces. The revolutionised ‘Self-Respect Marriage’ is a social contract, declaring both the bride and the groom equal partners in life, recognising mutually their natural feelings and expectations. Self-Respect Marriages can be conducted in a simple way, with mutual declaration of oath and exchange of garlands in the presence of well-wishers. The contents of declaration assert the equality of bride and groom.

This Self-Respect Marriage was introduced by Periyar. He conducted the first Self-Respect Marriage in 1928 in a remote village, Sukkilanatham near Aruppukottai in the present Virudhunagar district of Tamil Nadu. The followers and cadres of Self-Respect Movement conduct the marriage in the same manner. When Self-Respect Marriage was challenged in the court of law, it was held invalid. But unmindful of the verdict, many came forward to conduct such marriages in their families. It is said “If public opinion marches forward, law comes limping behind”. People willingly approved Self-respect marriages, ignoring the legal validity.

At last, Self-Respect Marriage got validity prospectively as well as retrospectively through the enactment of the legislation in 1968 when Anna (endearing form of C.N.Annadurai) assumed office as the Chief Minister of Tamil Nadu.
When the draft of the Bill was sent to Periyar through Asiriyar Dr.K. Veeramani, presently the President of Dravidar Kazhagam (DK), it was duly corrected by Periyar himself reflecting the core principle associated with Self-Respect Marriages.
In traditional marriages, the groom used to tie the ‘sacred thread’ (thali) around the neck of the bride. Periyar considered the ‘sacred thread’ as the symbol of slavery and appealed not to tie it while conducting Self-Respect Marriages. But marriage is an occasion where two families associate and jointly conduct. The ideological commitment to Self-Respect Marriages may not be in either of the families. So they may stick on to the tying of ‘sacred thread’. Periyar, in order to respect the unavoidable customs, had appealed to the cadres to allow the custom, in case it is insisted by the other family. It is not a compromise but a temporary adjustment. Later, if the couple understand the indignity, symbolised by the ‘sacred thread’, they may feel free to discard it.
The draft of the Bill to legalise ‘Self-Respect Marriages’ shown to Periyar was thus:
“7-A Special Provision regarding Suyamariyathai and Seerthiruththa Marriages – (1) This Section shall apply to any marriage between any two Hindus, whether called Suyamariyathai Marriage or Seerthiruththa Marriage or by any other name solemnised in the presence of relatives, friends or other persons.”

a) by each party to the marriage declaring in any language understood by the parties that each takes the other to be his wife or her husband; or

b) by each party to the marriage garlanding the other or putting a ring upon any finger of the other; (or) and

c) by the tying of the thali.

Periyar had not completed his primary school studies. He acquired worldly knowledge through observation and experience. He was quite equipped with the meaning and usage of words in English.

In the draft, while explaining the way of the conduct of Self-Respect Marriage it was mentioned apart from others, ‘and tying of thali’ (sacred thread). The word ‘and’ meant compulsory tying of thali which was not advocated by Periyar. Periyar suggested to replace the word ‘and’ with ‘or’, meaning the tying of thali is only optional.

When Asiriyar Dr. K. Veeramani took back the draft of the Bill to CM Anna, he enquired for the suggestion of Periyar, if any. Asiriyar narrated the suggestion made by Periyar. Anna said to Asiriyar, “I am a postgraduate (M.A.); you are also a postgraduate with a degree in law (M.A., B.L.). The correction suggested by Ayya did not strike us. Ayya is rightly known and endearingly called Periyar only because of such sparks of wisdom and forethoughts”.

The incident cited above and the suggestions of Periyar are being recalled by Asiriyar in public platforms, wherever it is required.

Education and employment, facilitates the freedom of both men and women to decide their life partners. It is not in love marriages alone but also in all arranged marriages. The pairs can convince their parents and families. The deviations from the traditional marriage rituals beyond the barrier of caste system are explained by the couple and they get their ultimate concurrence for the Self-Respect Marriage by convincing them properly.

The youngsters are exposed to worldly vistas, and they become more intelligent and informative than the previous generations. Let humankind liberate itself from the clutches of meaningless codes and customs with the aid of the spirit of self-respect and reach greater heights in civilization and life. Steadfast realisation of self-respect trait in every individual will bring laurels with immense satisfaction and peace in human life.

Let the value of Self-Respect
be cherished worldwide!