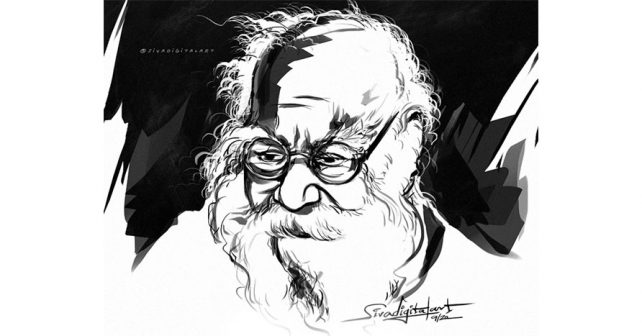 Periyar insisted that the aim of education was not meant to provide job for livelihood but to impart knowledge and that too a knowledge essential to lead a life with ‘freedom’ and ‘self-respect’ without harming any fellow human being and developing love and mutual generosity in society. In 1928, he made a trenchant criticism of the education system then obtaining as unsuitable for the development of human qualities and intelligence. He berated it as a system conducive to an irresponsible ruler who had no trust in his subjects and one that served as a means to make them ignorant and turn them traitors in order to keep them permanently under the rule of his thumb. To him, the contents of the education imparted was profitable only to a leisured class of people who thrived on the labour of others and therefore the very foundation of the system itself should be demolished. One of the changes he wanted was the removal of lessons on devotion to god, religion and the king since these were impediments to gaining knowledge  and functioned tools to create slavish mentality. Lessons on devotion to god etc., being the matters of interests to certain individuals, it was dishonest in the first place to run the schools to teach them. He kept reiterating his opposition to system of education which included lessons on devotions to god, relgion and the ruler. In a speech later published under the title ‘Duties of the Revolutionaries’, in his English weekly Revolt, Periyar explained in detail the triple oppression –caste, gender and class – and expressed his view on the kind of education he wanted:

True education is that which imparts knowledge on human nature… Tiruvalluvar says, “however educated one may be, if one does not adjust himself to the world current, he is worse than an illiterate”. The education that is now obtained in schools and colleges is useful to produce slaves, who are helping the foreign domination. It is sheer nonsense that devotion to God, devotion to religion and devotion to king should be taught in schools. If they deserve any devotion at all let them earn it by displaying their intrinsic merit. My ardent wish is that no education be imparted to the communities from which the intelligentia of the land have sprung up. I like to see the existing schools and colleges closed at least for a period of fifteen years and the ladies and the illiterate communities imparted the true education referred above. This is the first duty of any good Government and all sincere reformers.

Productive aspect of the lower castes, particularly the Ad-Dravidas was the constant theme Periyar repeatedly evoked in his speeches and writings. Periyar insisted that all non-brahmins were workers: the Shudras were deemed slaves by Hindu convention and the outcastes condemned to be slaves by Hindu faith. Adi dravidas were thus always already workers in the Self-Respecters’ lexicon. But whereas, formerly, labour was deployed less as a category of political economy and more as a moral category of analysis, now, that is, in the thirties, labour as a category was anchored in the context of political economy. Thus addressing a meeting of adi dravida Christians in May 1933 at a village near Lalgudi, Periyar observed:

If you desire true freedom you must have courage to destroy that which validates and constitutes the basis of your abject and enslaved existence . . . No one had ever told you the real reason for your low and degraded status because they know if you were to know of this you would pounce on them that very minute and tear them to pieces; which is why they concocted stories about God, religion and custom . . . If you were to bring together a Brahmin and a Paraiah and consider how they are constituted high and low you will see a high caste man is one who shuns labour, is lazy and lives off the work of others; whereas a low caste man is one who labours but yields the fruits of his labour to others and lives as an animal does—without a home, without proper clothes, without a regular morsel of food and without education.

S.Saraswathi, in her under-recognised monograph on Periyar and Self-Repect Movement has brilliantly brought out the essence of Periyar’s approach to Education: Putting great stress on the development of rational thinking as against the blind belief in the wisdom of ancestors, Shastras etc., supplanted by conscious and voluntary decisions on the basis of one’s own reasoning, Periyar laid emphasis on the changes required in the educational system and in the role of education. Periyar interpreted the Tamil word kalvi (education) as meaning teaching the character of the world and the nature of humankind. Describing the mothers as the primary teachers who through the domestic pedagogy taught the children up to their 7th and 8th years the basic things to understand the world, and designating the primary school teachers as secondary teachers, Periyar criticized spending of crores of rupees for the primary schools where the children are taught such commonplace things as ‘the dog has a tail’, ‘the cat has four legs’, ‘stealing is bad’, ‘don’t beat others’ as these are experientially learnt by the children by themselves before the entered the school. What really needed to be done by the teachers was to foster in the minds of the students the sense of self-respect, manliness, equality, love for the people and country, he regretted that such education was absent in the schools and colleges. Periyar refused to accept that the university graduates were in any way better than the unschooled and illiterate:

Here is a situation where one person gives another person some money to bribe his way to the heaven and touches other’s feet in reverence. He competes with the other in betraying his nation and people to eke out a living. Does the learning of such people pass off as education?  Just as the washerman, barber, carpenter, blacksmith and the cobbler have achieved mastery in their profession, so the degree- holders have also mastered their respective subjects.  Just as a washerman does not know the history lessons, so the holders of the B.A.degree do not know the technique of washing clothes; just as the cobbler does not know the grammer and literature, so do the vidwans and shastris not know how to make a footwear… So, those who have acquired B.A. degrees, vidwans and shastries are in no way superior to the washerman, barber and cobbler or more useful to the world. What these learned persons have acquired is only a trick, a skill, but not knowledge. The well learned could be foolish, selfish and the ones without self-respect while the unschooled may be the generous, intelligent and self-respecting.

To Periyar, capacity for reasoning and acquiring skills should be true components of genuine education but not the knowledge imparted and its reproduction through written examinations. He suggested replacing the thousands of schools and colleges in existence with ones that inculcated rational thinking. This, he claimed would, save much of the money, energy, brain work and time and lead to the development of quality of life, conduct, integrity , good will, humanism, love and a sense of equality of all. Arguing that the existing education system is protracted and quite expensive suited only for the affluent, he favoured compulsory universal education up to a level and subsequent diversification for vocational training.