Preface to the Communist Manifesto 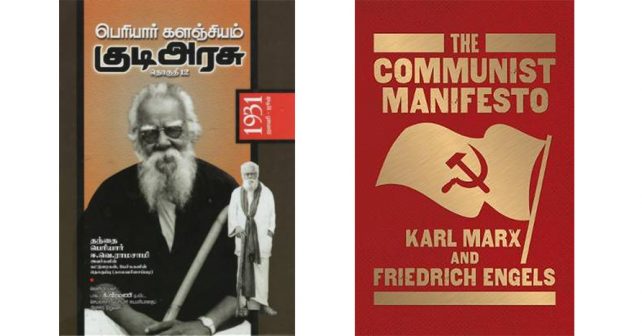 ‘Communist Manifesto’, released by Karl Marx and Friedrich Engels was for the first time translated and published in Tamil by Thanthai Periyar in ‘Kudi Arasu’ serially from 4th October 1931 to 2nd November 1931. Afterwards Periyar commenced his International tour on 13th December 1931 and returned on 8th November 1932. He visited various European, Asian and African countries. Of them his stay in Soviet Russia was from 14th February 1932 to 19th May 1932. While he was in Soviet Russia, he attended the May Day celebration as State Guest and witnessed Moscow March on 1st May 1932. While publishing the Tamil version of the Communist Manifesto Periyar wrote a Preface to it in Kudi Arasu. The English version of the preface is as follows:

In the world today in Russia, Spain and China these are rebellions and protests under the names of equality, socialism and communism.  This is a truth known to all.

Most of our people are under the impression that this feeling cropped up at first in Russia.  Those who deeply probe into the history pertaining to the communist and socialist systems of thought would find it incorrect, since there are evidences to prove that the feelings of equality and socialism originated in the world several centuries ago itself.

It is learnt that nearly 80-90 years back from this day the feeling of communism cropped up as a system of thought. Its basic tenets and principles were spread through conferences and statements lucidly, enabling us to understand them clearly.  In other words, it is learnt that during 1817 itself a conference of world communists (congress) was held in the great city of London.  We also come to know that as an outcome of that conference, a significant statement was also released.  But Russia happened to be the first country to attempt quick handling, practicing and implementing this system of thought.

According to a statement obtained by us, though the Germans were the first and foremost in imbibing these feelings and also the principal promoters and though a conference for it was held in London city and a rebellion for that was conducted then itself in France, Russia happened to become the first nation to try and implement it practically. This may be amazing to some but this occurrence was justified quite reasonably.

If readers ask us how it was justified, we can convince them only by clarifying that rapid steps for mitigation would generally be taken only in places of unbearable torture suffered by people. It is in such tumultuous places that rebels are usually bent upon remedial measures without procrastination. Viewed from this point, it is undeniable that the czar governance of Russia was the most atrocious among all the other governments in the world.  It is on these grounds that communist system had to come there into practice. Considered from this angle of justification, that kind of communist feelings should have infact cropped up first in India.  But it was prevented by various ploys. The malicious people behind such ploys, deliberately and cautiously have been confining our people in the darkness of ignorance, denying them education, worldly knowledge and a profound sense of self – respect. They made our people exist as barbarians by their wicked strategies.  People could find no way to achieve and obtain all that they were denied.

These wicked people thrust blind faith in god and religion on gullible citizens and created an illusion that they were destined by the gods to exist as slaves. People were made to believe that slavery would lead to salvation. These notorious miscreants also brought foreign invaders and kings from alien lands to dominate our people by utmost brutality.  All these unmitigated sufferings of people make us reiterate that the thirst for socialism, equality and communism should have cropped up first in India.  But to our disappointment, the first spot has been grabbed strangely not by India – but by Russia.

However, since the nobility of communism as a system of thought has spread almost all over the world, it has become an inevitable necessity in India. Hence it has started cropping up here. In several countries in the world certain aspects are found to be against the feelings of communism and socialist attitude.  But there is one striking difference in this regard between India and other countries.  It is to be noted that one particular aspect rules the roost in other nations.  That is the class struggle between the haves and have-nots (the rich masters and the poor servants).  But in India it is over shadowed by the disparity of the upper caste and the lower caste people.

Since caste – based discriminations are enormous, they have fortified the class struggle, making it a problem of secondary importance. This obstacle has hindered the communist spirit’s growth in India.  Protests against communism is on the rise here which has stifled from flourishing.

All the particulars stated above may cease to this extent.  Our desire is to make our people clearly understand the manifesto related to the communist policy, released long ago.  We wished to translate that communist manifesto for the benefit and, awareness of ourreaders. Every sentence you have read so far should be treated as a part of our preface for the translated content which follows.

Everything you would read henceforth would be only the translationof that manifesto. There would be no place in it for our personal views.  We wish readers would read the entire content treating it only as an outlet of the views and thoughts of two Germans in 1847.