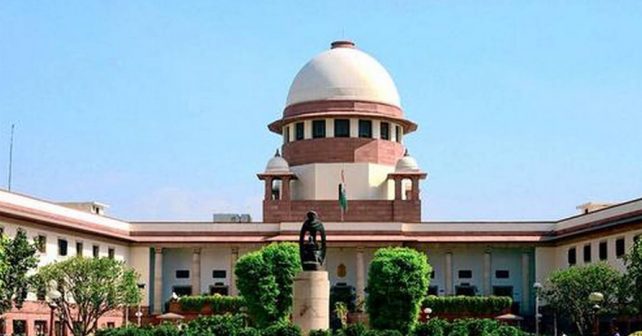 The chariot of Covid-19 has been crushing us all under its wheels. At this juncture, the chariot of ‘Puri’ Jagannath in Odisha was allowed to roll on 23rd June on the Grand Road in ‘Puri’, covering a distance of three kilometres.

Owing to the extended lockdown almost the entire country has been cribbed. The Central and all the State governments have been insisting on social distancing and isolation to break the chain of virus transmission. Any event where there is a possibility for crowd, is strictly prohibited. Irrespective of political parties, forums and outfits, all of us have been extending our co-operation to the collective fight against Covid-19. All are aware of the threat.

Temple visits have been prohibited and festivities related to temples have also been banned. Almost all the temples remain shut and nobody is exempted from any of the orders promulgated. The Hindutva supporters tried their best by agitating against temple closures and other affairs concerned. The problem is neither of religion, nor of temples. Prevention of crowd is the only purpose. Can’t religious fanatics understand this?

When the Shankaracharya had welcomed the Supreme Court’s decision on June 18 to restrain Puri ‘Rath Yatra’, what made him oppose it within four days? Can a threat to the highest court of law in the country be given a lenient view?  How are we to ignore this? Do religious powers have the right and strength over and above those of the Supreme Court? This is the question which rises where we are flummoxed by the volte-face of the judiciary.

Having captured the power of rule at the Centre, the BJP brought almost all the organisations under its control, seizing their autonomy. While this blame is already there on it, should the situation worsen to the extent of threatening the Supreme Court itself? This has undeniably set a bad precedent.

If the arms of religious fanaticism could stretch and reach even the highly powerful and righteous Supreme Court, quite naturally our people would be gripped by the fear of losing their basic rights and livelihood.

On June 22, 2020, the Supreme Court heard a host of pleas behind closed doors, at about 8. p.m.  It recalled its former order and granted permission for the yatra. This extraordinary verdict is not only terribly shocking but also shattering our faith in courts of law and the entire judiciary. 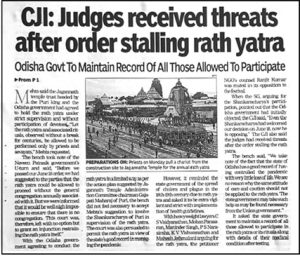 An excerpt from The Times of India (June 23) reads as follows:

“When the solicitor General arguing for the Sankaracharya’s participation pointed out that the Odisha Government had initially objected, the Chief Justice of India said – ‘Even the Sankaracharya had welcomed our decision on June 18- but now he is opposing’.

The Chief Justice S. A. Bobde also said that the judges had received threats after the order stalling the Rath yatra.

“Lord Jagannath won’t forgive us if we allow the yatra”.

The court’s concern for public health and safety amid the Covid-19 pandemic reflected on the restraining order. The Chief Justice further directed that there shall be no activities, secular or religious, associated with the rath yatra, during this period. Hence, it is puzzling, why the order was recalled within a short period of four days.

What shocks us is the revealing of the Chief Justice that the Supreme Court judges had received threats of dire consequences if the ban is not revoked. Did this threat cause the recall of the stay order? What exactly happened behind the scene, must be clearly revealed to the nation. It is certainly disastrous that religious fanaticism has gone to the extent of intimidating the apex judiciary of our country.

The Odisha State Government’s counsel, senior advocate Harish Salve had also agreed on June 18 with the Supreme Court that people would congregate on the streets of Puri if the Rath yatra is held. Other advocates too admitted that the religious fervour would make people throng the streets. It was also pointed out that even the Olympics have been put off this year. Inspite of all these, the stay order was recalled on June 22, and the Rath yatra was ultimately held on June 23 without the congregation of devotees. In view of the pandemic, the Odisha government was not allowed to permit crowds during the procession. A 41-hour shut down was imposed in the pilgrim town Puri. But this is not a solace.

The million dollar question is – who threatened the Supreme Court? Which malicious power caused the volte-face, is to be investigated and stringent action must be taken against the elements concerned. The nation owes an answer to every citizen!