Quotas cannot be reduced to a math formula. Leave decision to the States 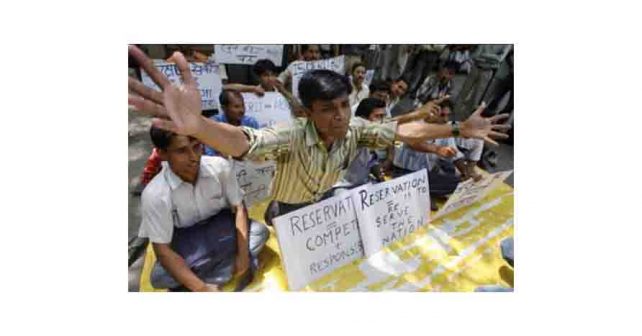 Nearly 30 years after a 50% ceiling was imposed on total reservations, SC is considering the issue afresh. Is it time to lift the cap or not?

In the famous Mandal case (Indra Sawhney vs Union of India), a ninejudge bench of the Supreme Court recorded that the Hindus who form the majority in our country are divided into four varnas —Brahmins, Kshatriyas, Vysias and Sudras —–forming a four-tier hierarchical caste system. All women are supposedly Sudras.

Panchamas (untouchables) are outcaste and they are subjected to suppression by all the four varnas. In short, inequality is inbuilt in the caste system. Thus, Sudras (Socially and Educationally Backward Classes — SEBCs) and the untouchables (Scheduled Castes) are deprived of education and excluded from administration. SEBCs, SCs and STs constitute backward classes.

The following lines are extracted from the judgment of Madras High Court dated 18.04.1914 in Gopala Moopanar vs Dharmakarta Subramaniya Iyer, rendered by Justice Sadasiva Iyer: “Owing, however, to the repression of Kshatriyas and Vysias by the Brahmins in the medieval ages, most of the Kshatriyas and Vysias have descended to the position of Sudras”.

Thus, the backward classes, who are deprived of education and excluded from administration, constitute a big majority among the Hindus. The debate on the reservation and the percentage thereon shall be made, taking into account this historical background.

Reservation to backward classes has faced various hurdles caused by the dominant castes. One such hurdle is an attempt to fix a ceiling of 50 per cent on the quantum reservation.

Nowhere does the Constitution prescribe a 50 per cent ceiling on quota. Yet in 1962, a fivejudge bench of the Supreme Court in the M R Balaji vs State of Mysore case laid down that reservation should be less than 50 per cent.

However, in 1975, another five-judge bench of the Supreme Court in the State of Kerala vs NM Thomas case, considering all the decisions relating to the 50 per cent ceiling, concluded that the percentage of reservation would be incumbent on facts and circumstances of each case and no hard and fast rule could be laid down. The quota matter cannot be reduced to a mathematical formula so as to be adhered in all cases uniformly.

In fact, the Supreme Court gave an illustration that if a state government provides 80% reservation based on the population of backward classes in that state being 80%, the policy cannot be faulted with. As per the judgment, the dominant object of reservation is to take steps to make inadequate representation adequate for backward classes in public employment and education.

But, SEBCs were not identified by many state governments as well as the central government under Article 340 of the Constitution, thereby denying them reservation. It was only in 1990 that reservation of 27% to SEBCs was provided by the V P Singh government in central government employment by implementing Mandal Commission recommendations.

The constitutional goal can be achieved only if the SEBCs, SCs and STs occupy the higher echelons of service and not the lower services alone. Justice Chinnappa Reddy of the Supreme Court expressed his view in Vasanth Kumar’s case in the following words: “Why not ask ourselves why 35 years after Independence, the position of the Scheduled Castes, etc. has not greatly improved? Is it not a legitimate question to ask whether things might have been different, had the District Administrator and the State and Central Bureaucrats been drawn in larger numbers from these classes?”

Now, even after 75 years of Independence there is no improvement in the situation, since there are not many judges f rom the SEBC, SCs and STs in high courts and the Supreme Court. There is almost nil representation for reserved cat e gories among the executives/secretaries in the Central Secretariat where policies are decided, in IITs and IIMs and in Public Sector Undertakings. It is time the judiciary-invented 50% cap is done away with, leaving the responsibility to the governments, as clarified in the NM Thomas case of 1975.