Readers’ Circle of The Modern Rationalist 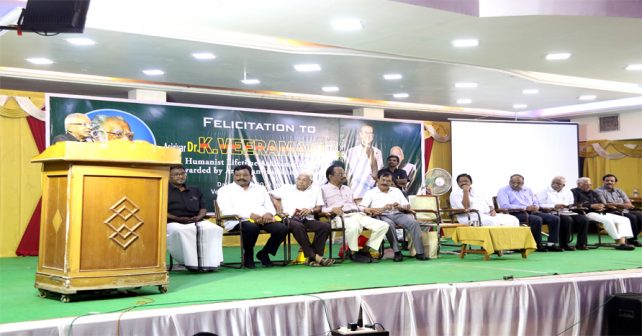 The historic city of Thanjavur has never lagged behind in according momentum to socio-political awakening right from the days of Justice Party.  It played a vital role in being hospitable to Thanthai Periyar and to his nationalistic principles. No wonder therefore the city felt it essential to felicitate Periyar’s disciple Dr. K. Veeramani for having been presented a Lifetime Achievement Award by the American Humanist Association.  The function took place in Maryland, USA on 22nd September, 2019.  On Dr. Veeramani’s arrival from the States , various forums and Dravidar Kazhagam celebrated the event and felicitated him in Chennai, Madurai and Salem.

But the function at Thanjavur on 6th November, 2019 was non-political and a voluntary effort of the city’s elitist group.  Doctors, Lawyers, Engineers, Officials and Academicians joined under a canopy of the Readers, Circle of The Modern Rationalist which is comparable to the standard journals of international reputation, both in its content and structure.

The origin of Readers circle, also known as Study Circle in modern days goes back to the 18th century Coffee Houses of London where it was just a confab among the scholarly public.  From those cubicle of leverages arose a huge collection of essays, periodicals, criticisms and commentaries.  We have on record that highly critical and controversial George Bernard Shaw got himself associated with Browning Study Circle, more to criticise the Victorian poet’s obscurity and optimism.  The fact remains that the Thanjavur meet of The Modern Rationalist Readers’ Circle was just a reminder of those centuries-old intellectual gatherings.

Though organised within a short duration, the gathering at Jayaram Hall on the banks of the Grand Anaicut Canal was astonishing.  A sizeable percentage was a group of young men.  Braving the threatening rain, a sprinkling of women was encouraging.  Activists of the Kazhagam were also in large numbers. 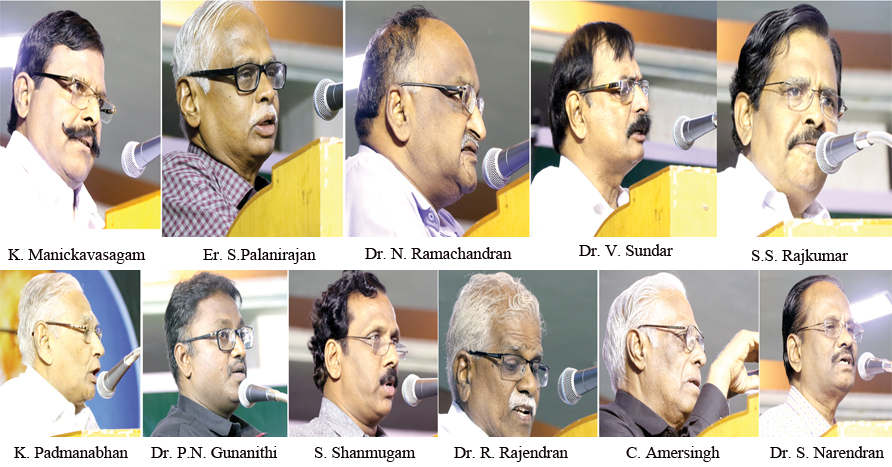 The function commenced exactly at 6 p.m., when Prof. Senthilkumar extended a note of welcome to the Awardee, to the speakers and to the enlightened gathering.  Advocate S.S. Rajkumar presided over the Meet.  He spoke bi-lingually on Humanism and felicitated the awardee with a personal touch of love and affection.  Since the readers’ circle was on an English monthly, the proceedings were mostly in English. Dr. M. Selvaraj, a reputed surgeon and President of the Readers’ Circle and Mr. C. Amer singh adorned the Thalaivar with colourful shawls.  Prof. N. Ramachandran, Former Vice-Chancellor, PMIST released a newly published book ‘Periyar’s Footprints and His Disciple – Asiriyar’.  The first copy was received by Dr. V. Sundar, senior Neuro surgeon, who also spoke on Periyar, the globalised.  A large number of visitors came up on the stage and bought the copies of the book.

Dr. S. Narendran, an author of well known Tamil books on medicine, commended the versatility of the Thalaivar in contributing essays and books on practical aspects of human life. Dr. R. Rajendran, Secretary of King’s College recollected the fact that it was Asiriyar who founded an All-Women Engineering College for the first time in the World.  He said that he deserves many more Awards in future. Mr. K. Manickavasagam, Rtd. Dy. Superintendent of Police explained how his respect towards Asiriyar  evolved by stages – as a young boy with reverential respect, as a student to learn from him and as a police officer to ensure his safety in security arrangements. Rev. Fr. Arokia Baskar highly commended the genial outlook of the Awardee in championing the cause of the minorities.  He said the Award conferred on him establishes his name and fame among the globally known intellectual figures and Nobel laureates who were the earlier recipients of the prestigious Humanist Award.

Advocate T. Kumarvel mentioned that Asiriyar is the first Indian to be felicitated with an Award by an Association in America.  Prof. P.N. Gunanithi, Auditor S. Shanmugam and Engineer K. Padamanabhan were the other dignitaries who spoke admiringly of the Asiriyar.

Dr. K. Veeramani’s thanks giving address at length, was a graphic and picturesque  description of the Award function in the USA. He humbled himself in telling that for all the achievements, he is said to have performed, he alone was not responsible.  Many persons are there to constructively criticise, suggest, assist and encourage all that he does.  They must also be honoured, he felt.  Hence he called his better-half

Madam Mohana to come on the stage and then successively called a few other well wishers and friends.  With their pleasant company around him on the stage, he said he received the Award.  Though a small episode , it symbolised his deep debt of gratitude and love towards his well-wishers.  This gesture of goodwill must have been unprecedented in similar functions earlier and hence there was an all-round applause from the audience.  At about 9 p.m. the function came to an end with vote of thanks proposed by Rotarian C. Tamil Selvan.