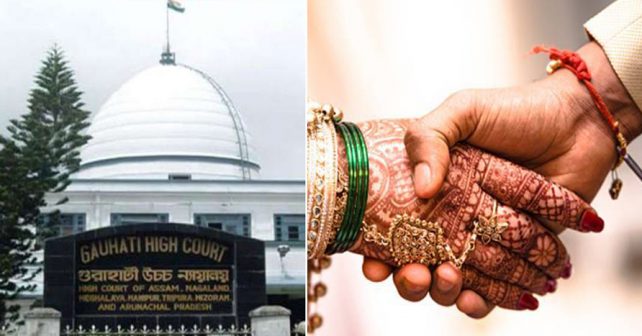 Recently the Guhati High Court granted divorce at the plea of the husband on the ground of refusal to wear ‘sakha’ and ‘sindoor’ sign by the wife. Sakha is a bangle made of conch shells that is worn by newlywed women in some customs, while sindoor is vermillion that some Hindu women apply on their heads.

The Bench of the High Court ruled that a categorical refusal by the wife to wear the bangles and sindoor points towards her unwillingness to continue her married life. The court ordered, “under such circumstances, compelling the husband to be in matrimony with the wife may be construed to be harassment”.

The couple got married in 2012. As per the plea of the husband, the couple lived for a month together in the husband’s house with his relatives and the wife raised the demand to live with the husband separately in another house. The relationship of the couple deteriorated and the wife left the matrimonial house in 2013. She filed a case against the husband and his family members for cruelty and dowry harassment under Section 498A of the Indian Penal Code. The husband and relatives were acquitted and then the husband filed a suit for divorce on the ground of ‘cruelty’ by the wife. She contented the plea alleging harassment at the hands of husbands and in-laws for dowry and that she was denied food and medical treatment.

The High Court observed that the allegation of subjecting the wife to cruelty was not sustained and such acts of lodging criminal cases on unsubstantiated allegations against the husband and or the husband’s family members amount to ‘cruelty’. Further the order said such ‘cruelty’ is also a ground for granting divorce.

Besides the High Court observed that the husband alleged before the lower court that the wife refused to wear sakha and sindoor, and that this contention was not disputed by the wife. “The same remained uncontroverted and is therefore an evidence material for the purpose of this proceedings. Under the custom of Hindu marriage, a lady who has entered into marriage according to Hindu rituals and customs, and which has not been denied by the respondent in her evidence, her refusal to wear ‘ sakha’ and ‘sindoor’ will project her to be unmarried and/or signify her refusal to accept the marriage with the appellant,” the high court ruled.

The mental makeup and understanding between the husband and the wife is more important than the mere observance or refusal of certain rituals and signs imposed as religious customs.