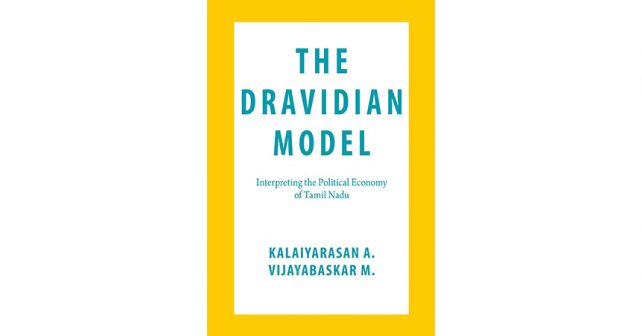 The book, ‘The Dravidian Model – Interpreting the Political Economy of Tamil Nadu’ by A. Kalaiyarasan and M. Vijayabaskar, scholars from Madras Institute of Development Studies (MIDS) both object and content wise is different, infact a pioneering study. “There are similar studies on sub national divergence in economic trajectories but there is less literature on political process of the sub national level. Regional dynamism or otherwise is also accompanied by questions of regional politics around redistribution and welfare”. The book is the first of the kind on the outcome of the political process that lasted during the 50 – year rule of Dravidian parties since 1967 in Tamil Nadu and that is analysed as ‘The Dravidian Model’.

The book analyses the development in EIGHT chapters including an introduction chapter on ‘The Dravidian Model’.

‘The Indian State is a ‘quasi federal’ one with sub national governments, given primary responsibility for crucial sectors like agriculture and human development including health and care’. In one such regionality, the political rule has brought significant development and progress have taken place simultaneously initiating the measures to dispense social justice to eliminate the birth based inequalities, pointed out as status based inequalities by the authors. The Dravidian Model reflects the core meaning of ‘Dravidam’, by bringing the equality and equal opportunities to the deprived classes, remarkably compared to the social progress attained in the rest of the States of the country. The nobel laureate Prof. Amartya Sen along with Dreze has pointedout thus: ‘Tamil Nadu in Southern India, a State that has been noted for its ability to combine relatively high levels of economic growth with human development, particularly in the domains of education and health care’. With this already existing healthcare functional infrastructure, Tamil Nadu is able to combat the second wave of corona pandemic relatively with effectiveness.

In the chapter, ‘Conceptualising Power in Caste Society’, it is stated ‘we highlight the political labour involved in the formation of a historic bloc or a ‘people’ comprising of a range of subaltern groups under a transitive ‘Dravidian’ – ‘Tamil’- ‘non-Brahmin’ identity against the hegemony…. This mobilisation, articulated a demand for ‘self-respect’ and social justice and it has shaped the development trajectory of the State’. This observation and analysis has combinedly brought a distinct and desirable approach required for social science research studies in the country.

In ‘Democratzing Education’, it is narrated that the education infrastructure starting from the primary school upto higher education, increasing students’ enrolment at all levels relatively are the main reasons for the development on education front of the State. The State students’ enrolment of percentage of 48 is significant when the national level higher education student’s enrolment level is targeted at 50 per cent. The education to the sections, so far denied is the other main reason for higher enrolment. By democratizing education, imparting education to all the deprived has taken place. Opportunities to get educated are available to all. That is the real democratization.

In the chapter, ‘Democratizing care’, the progress made on the health care front has been analysed. The specific achievement under children care with the effective implementation of the pilot scheme of United Nations, succeeded and sustained by the State is attributed for the projection of the Dravidian Model. The Noon Meal Scheme which was transformed as Nutritious Meal Scheme are responsible for the healthy condition of the population who were once children. Health care is made easily accessible to all.

‘According to ideologues of the Dravidian Movement, there were two factors that hindered democratizing capital accumulation in the region. First they held that the caste system, rendered actors from some castes ‘born capitalists’ and those from others ‘born labourers’. Second, the dominance of Marwari (north Indian) capital in the country and in the region was seen to prevent modernization of the economy and entry of ‘Tamils’ into business. During the half a century rule of Dravidian parties, many from the backward classes have become industrial and business entrepreneurs in the State.

In the chapter, ‘Transforming Rural Relations’, the impact of the Dravidian parties rule has been, arrived thus by the authors: ‘On Jeyaranjan’s work (2020), we argue that legislative measures combined with pressure brought on landlords through collective mobilisation by the Dravidian and left parties and the coming to power of the DMK did result in transfer of land to the lower castes. The executive measures coupled with the political will has transformed the rural relations in the State.

In, ‘Popular Interventions and Urban Labour’, it has been illustrated, ‘lower castes have indeed been able to access higher segments of the urban labour market, the authors have demonstrated through case study how affirmative action policies have rendered the labour market relatively more inclusive through incorporation of employee from lower – social – status households in the State.

Everything is not rosy and positive in the Dravidian Model. Under the chapter, ‘Fissures, Limits and possible Futures’. The authors have covered the negative as well as unattained aspects too. ‘Even as a century of mobilization and over half a century of institutionalized populist interventions have led to considerable democratization of opportunities and access to public services like health and education, a set of fissures in the Dravidian popular are also visible. Specific caste groups, Dalits in particular, do not see their demands addressed to the extent others’ demands are, even as affirmative action policies are becoming less effective….. the role of federal relations and the macro-economic regulatory shifts at the national and the global scale to supplement it.’

By and large the book ‘The Dravidian Model’, a pioneering initiative is only a beginning. The entire Dravidian Model cannot be concised in a single work. Lot many works of similar nature have to be undertaken for which the financial supports for the study have to be released from Central and State governments. The narrated model of a few States have become obsolete without adequate substance for the study. This study, if it is gone through, the reader would realise that it is devoid of any political influence and it is purely an academic cum research exercise. Let the first exercise will pave the way for the release of more such studies. The book must be read by everyone who are interested in the development and progress model of the welfare State. This book must adorn their libraries with no need to stress for the libraries of higher education institutions and universities. The work, labored by the authors is laudable verymuch.