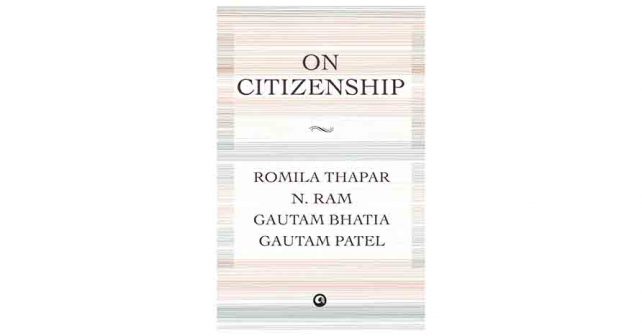 Four intellectuals explain threadbare the law on citizenship, the role of Parliament and the Constitution, and why giving it a religious basis must be condemned

On December 9, 2019, the Home Minister of India introduced the Citizenship (Amendment) Bill in the Lok Sabha. The arrival of this piece of paper met with huge opposition both in Parliament and in the public arena. The book On Citizenship answers many questions regarding the law on citizenship right from where it all started.

The first part is authored by historian Romila Thapar who writes about the ‘right to be a citizen’. When it comes to the law on citizenship, the first and foremost question that needs to be answered is — what is citizenship? The Constitution of India does not define it. Thus, to even attempt a definition requires the understanding of the evolution of man from being a ‘slave’ to a ‘citizen’. Citizenship, Thapar writes, is commonly described as “the relationship between the individual as a citizen with the state to which he or she may belong”. This relationship is made binding through a contract between the citizens and the state, a document known as the Constitution that embodies these rights. As per this contract, the citizen agrees to perform certain duties in return for protection by the state. The duty of the state not only involves protection of citizens from harm but also to provide basic living standards such as food, water and shelter. Over a period of time these so-called basic standards expanded and brought within its scope the right to education, equality and social justice as well. These are the bare minimum for any citizen. Thapar makes it clear that it is high time ‘we, the people of India’ realise that citizens established the state and gave it its powers. The Constitution or the contract between citizens and the state was made by citizens and hence they have the right to enforce the rights as well.

Politics around an idea

Political commentator and journalist N. Ram writes about the present situation in India. He begins his essay by quoting political scientist Niraja Gopal Jayal as to how “365 million subjects of King George VI were not magically turned into citizens” at the stroke of the midnight hour separating August 14 and August 15, 1947. The writer makes it clear that India is absolutely not the republic that was envisioned by the makers of the Constitution seven decades back. What was seen as a ‘little thing’ during the Constituent Assembly debates turned out to be a huge threat in 2019-20. This was the debate on offering citizenship on the basis of religion. The writer condemns the idea of having religion as a basis for citizenship. So how did religious difference suddenly make its way into the Constitution? It was not a sudden phenomenon. The election manifesto of the Bharatiya Janata Party right from the 1989 general election shows its idea of introducing a National Register of Citizens (NRC) to push out infiltrators (Muslim migrants) and give permanent citizenship to refugees (non-Muslim migrants).

Jurist Gautam Patel stresses on the relationship between citizenship and fundamental rights and the importance of their co-existence, especially when the Constitution is viewed as a social document. Patel highlights case laws from various jurisdictions around the world, including India, particularly instances when the judiciary stood by and watched as the state took away the fundamental rights guaranteed to citizens. The writer records the importance of ‘purpose’. If a decision is rendered based on a law without taking into consideration its purpose, then such a decision may prove to be bad in law.

An apt example would be the case of ADM Jabalpur v. Shivkant Shukla, where when all the judges of the bench held that the state was right in curbing all fundamental rights during the Emergency, Justice Hans Raj Khanna, the lone dissenter, looked beyond the provisions of the Constitution, into the purpose or motive on which the law was built. His view was that no situation, not even a state Emergency can take away the right to life and personal liberty of a citizen. Although this erroneous judgment was overturned, the writer reiterates the duty of the judiciary to keep a check on executive action and make sure free speech is not stifled at any cost.

The book establishes clearly that citizens not only have a set of rights, but they also have the right to enforce them. The state cannot decide who can and cannot be a citizen of India on a non-secular and discriminatory manner. Above all, the book urges the reader to understand the aberration that has taken place and to reflect on, in the words of Ram, “what needs to be done to find a way back to the core values of the Indian Republic as set out in the Preamble to the Constitution — justice, liberty, equality, and fraternity.”