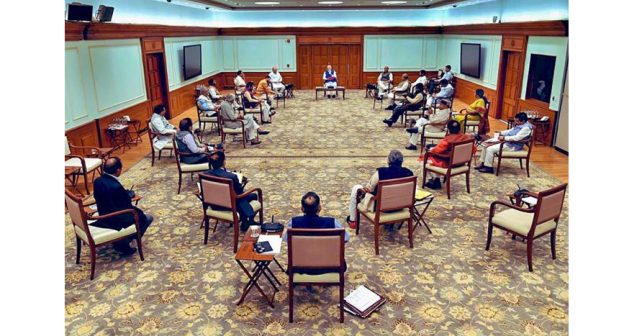 The Union government has declared 21 day country-wide lockdown to protect the people from the Corona Virus pandemic since 25th March 2020. The pandemic that showed its devastating apocalypse in China has spread its tentacles in Asian and European countries. The menace has projected its ugly face in the United States of America. The Corona pandemic, its spreadthrough aerosol would swiftly attack others who are in the vicinity and interaction with the person, already infested with. As the neighbouring country of China, India did not experience the menace immediately.

The Corona virus pandemic attack has become a global disaster subsequently and the menace has had its impact on India. Though India has similar demographic strength as that of China, it has to go a long way to develop the medical infrastructure to combat the pandemic menace. Since the level of infestation is STAGE II, the required measure to combat is prevention. With that object the 21 day lockdown has come into force. Except the essential services the others are prohibited. People are not allowed to wander on roads unnecessarily.

The ruling BJP at the Centre has sufficient ground on many a front for criticism from the opposition side. Deficiencies are many; defaults are at large, liable for criticism. Keeping at bay all the criticism, the opposition has expressed solidarity and extension of support to the rulers in all the efforts to safeguard the people from Covid 19 virus attack. In fact at this initial stage, many opposition parties have appreciated the initiatives to enforce stringent lockdown and the consequential self-restraint. The crisis has united all the political parties and the people beyond the dividing frontiers caste, religion, language etc. The Muslim community which was on the continuous agitation path for more than a month against CAA, NPR and NCR has deferred the agitation to stand united and be integrated with the country.

How did the Prime Minister exempt social distancing for the mammoth prayer attended by the Chief Minister of U.P.? The law enforcers should not be the law breakers.

The country-wide curfew has not completed its first week. But truthful and loyal to the saffron ideology, the Union Minister of Environment, Forest and Climate Change has made an announcement of re-telecast of Ramayan and Mahabharat on Doordarshan national channel. The commercial venture was telecast long ago. The minister has stated that the re-telecast is meant to break the monotony of the people who had remained and continue to remain in their homes till 14th April 2020

The saffron forces have not hesitated to show their true colour even at this critical juncture. There are many programmes which are educative as well as entertaining to break the monotony. The saffron rulers have chosen Hindu religious scripture.

The Corona crisis has united the entire population of the country. The move of the minister has shaken the unity with the needless re-telecast of Ramayan and Mahabharat. Is it fair on the part of the secular government to give preference to the telecast of Hindu scriptures? Let the move get stopped at this critical juncture! The citizens are fighting with unity against the Corona virus!