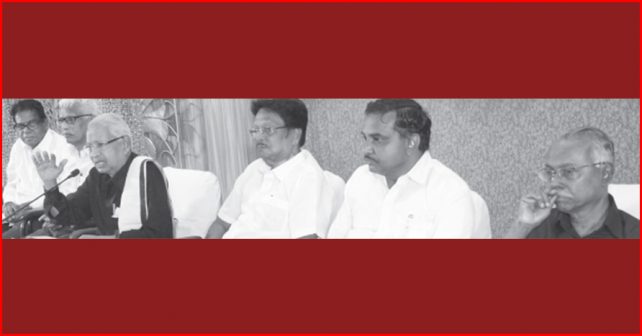 Many educationists of eminence, academicians with long innings in the field of educational administrations addressed the seminar.  The excerpts of the contents of their delivery:

Dr.K.Veeramani, Chancellor, Periyar Maniammai Institute of Science and Technology (PMIST), Vallam, Thanjavur, Tamil Nadu: Since 2014, calculated move of falsifying history and fabrication of scientific facts have been systematically carried out, right from Prime Minister down to field level cadres. In the name of upkeeping the tradition, Gurukul system of education is encouraged. Lateral entry of gurukal educated students into the main stream higher secondary education is allowed recently. In the name of heritage, without any basis, undue importance is thrust on Sanskrit language which has never been a spoken language.

The damage likely to be caused by these retarding measures will not only affect the current generation of students but the posterity too.

The recently announced bill viz. Higher Education Commission of India Bill, 2018 is likely to cause heavy damage to all the universities. HECI Bill in case gets through will replace University Grants Commission. HECI seems to be not having any autonomous status. The grant releasing power is vested with the Ministry of Human Resource and Development which will create politicisation in the allocation of grants to universities.

Education must be devoid of religious favour. The texts of any religion must be distanced while framing syllabus for schools and colleges. True to the letter and spirit of Indian Constitution, educational syllabus has to be secular in the content. HECI, mooted by the present BJP government will damage further the present system of higher education.

Education has been made a marketable commodity in the neoliberal economic environment. The subject of ‘education’ has been covered under the General Agreement on Trade in Services (GATS) controlled by World Trade Organisations (WTO). India being the member country of WTO proactively gave its acceptance on ‘education’ under GATS prior to the formal signing of the Agreement by the member countries. The move will enable opening the flood gate for the entry of foreign universities in India.

Prof. Dr. M.Shanmugam: former Professor, Institute of Correspondence Course and Continuing Education, Madras University presented a detailed note on the observations of the draft on Higher Education Commission of India Bill, 2018, the brief of which has been published in the next page. The seminar was attended by many students, teachers and persons of public concern from all walks of life.

–         HECI has no power for funding, but can have interaction with Minister of Human Resources Development (MHRD) for Funding. It has to get prior approval for major decisions.

–         HECI can impose fine or prosecute under Criminal Procedure Code Higher Educational Institutions (HEIs) for violation of its directive.

It has not been clarified either in the draft HECI bill or in the clarification notice. What is the official link between the regulator and grant-giving entity? All the regulations framed by HECI are to be approved by the parliament as proposed in the draft bill. Similarly, should all the recommendations of the grant – giving entity be approved by the parliament? So it is seen that neither of the bodies is autonomous. The irony is that a non-autonomous body is proposed to replace an autonomous body (UGC).

iii)     Establishment of the Commission: It has Chairperson, Vice Chairperson +12 members (3 Government Secretaries + 2 Chairpersons, AICTE and NCTE +2 Chairpersons of accredition bodies-NAAC/NBA +2 Vice Chancellors +2 Serving Professors +1 doyen of industry). All these members are appointed by Central Government. There is no adequate representation to about 800 universities and 4000 colleges spread over India. There is no elected members as in the case of Medical Council of India and Bar Council of India. It is not an autonomous body. The regulations and rules framed by HECI should get prior approval of the government. It looks like a section of MHRD.