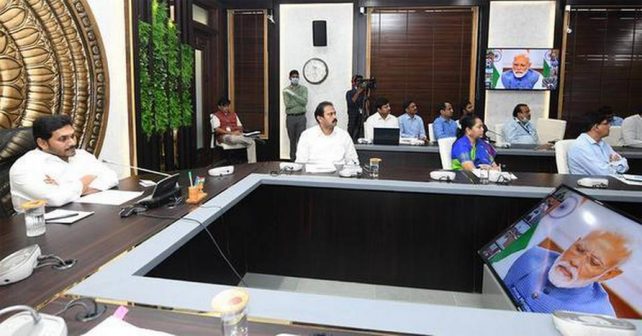 The Central government has so far followed a mostly top-down approach in tackling the COVID-19 pandemic. During lockdowns 1.0, 2.0 and 3.0, the Centre has issued guidelines from time to time, ostensibly under the Disaster Management Act of 2005, containing varying restrictions on public activity and commerce which the States are expected to enforce. The Centre directs the State governments to scrupulously enforce every new set of guidelines, with the States only being allowed to increase and not dilute the restrictions. This centralised approach is counterproductive, has put the federal structure of India under strain, and is in fact beyond the powers of the Central government.

Two examples show why this is counter productive. One, the Central government, in its latest guidelines, has classified all districts in the country as red, orange or green zones in a bid to lift lockdown restrictions in an area-specific manner. Some States/Union Territories objected to the classification of certain areas/districts as red zones on the ground that these areas are very large. They pointed out that there was no need to keep economic activity on hold in an entire district when cases had been reported only from a small portion of that district. Two, Kerala, probably the best-performing State in terms of its response to COVID-19, was sent a missive by the Central government to refrain from relaxing restrictions in the State. The Kerala government had issued revised guidelines in mid-April following a near-perfect recovery rate and a steep fall in the number of cases. However, the Central government did not trust the wisdom and judgment of the State government in the matter.

This centralised approach, apart from leading to undesirable outcomes, may not be strictly legal. A study of the Disaster Management Act, 2005 as well as relevant provisions of the Constitution makes it clear that this practice of issuing guidelines and directions to the States is itself unconstitutional.

Under the federal scheme, Parliament can legislate on matters under the Union List (List I), Stage legislatures can legislate on matters under the State List (List II), and both Parliament and State legislatures can legislate on matters under the Concurrent List (List III). The residuary power to legislate on matters that are not mentioned in either List II or List III vests with Parliament under Article 248 of the Constitution read with Entry 97 of List I. Furthermore, the rule of harmonious construction laid down by the Supreme Court in a number of judgments, including in Godfrey Phillips v. State of U.P. & Ors (2005), dictates that the entries in the legislative lists must be interpreted harmoniously, and in the event of any overlap between two or more entries, the specific subject matter contained in a particular entry must be deemed to have been excluded from another entry which may deal with a more general subject matter. Finally, as per Articles 73 and 162, the executive power of the Centre and the States is co-extensive with their respective legislative powers, which means that the Central and State governments can only take executive actions in matters where Parliament and State legislatures, respectively, have powers to legislate.

Disaster management as a field of legislation does not find mention in either List II or List III, nor does any particular entry in List I specifically deal with this. Thus, the Disaster Management Act could only have been enacted by Parliament in exercise of its residuary powers of legislation under Article 248 read with Entry 97 of List I.

The question is, can the Act be applied at all for dealing with a pandemic. The Disaster Management Act allows the Centre to issue guidelines, directions or orders to the States for mitigating the effects of any disaster. The definition of ‘disaster’ under the Act is quite broad and, literally speaking, would include a pandemic too. Such a reading of the Act would vest the Central government with powers to issue directions and guidelines to State governments for dealing with the pandemic in their States, which is what the Centre has been doing. However, ‘public health and sanitation’ is a specific field of legislation under Entry 6 of List II. This would imply that States have the exclusive right to legislate and act on matters concerning public health. Thus, the Centre’s guidelines and directions to the States for dealing with the pandemic trench upon a field of legislation and executive action that is exclusively assigned to the States — public health.

The Supreme Court has held time and again that federalism is a basic feature of the Constitution and although the Union enjoys many more powers than States, the States are sovereign. The Disaster Management Act, having been enacted by Parliament under its residuary powers of legislation, cannot be applied to pandemics in view of the fact that the power to legislate on public health is vested specifically and exclusively with the States.

In fact, a law on this exists — the Epidemic Diseases Act, 1897, which has the objective of preventing “…the spread of dangerous epidemic diseases.” However, under this Act, it is the State governments which have the prerogative to take appropriate measures for arresting the outbreak or spread of a contagious or infectious disease in their respective States. The Central government’s powers are limited to taking measures for inspecting and detaining persons travelling out of or into the country. Even if that Act were to be amended, it would not empower the Central government to issue directions to the States to contain the pandemic within the State; it can only deal with inter-State spread of the disease. Therefore, instead of resorting to the Epidemic Diseases Act which gives powers to the States, the Centre has applied the Disaster Management Act, which has enabled it to ride roughshod over State governments. This is plainly unconstitutional. The States are not legally bound to observe the directions/guidelines being issued by the Central government and would be well within their rights to challenge them before the apex court.