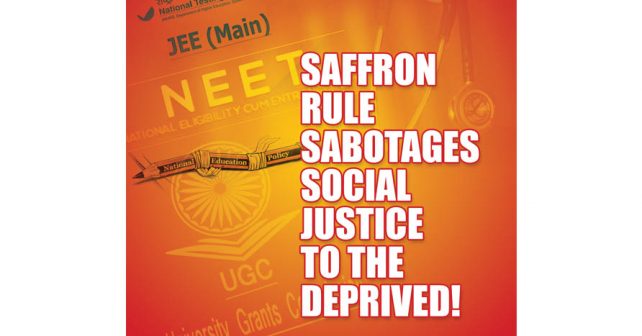 The importance and justification of equality of humans and equal opportunities to all were felt and practised starting from the British rule in the form of Communal G.O. When Constitution Assembly discussed and formulated the Constitutional Law for the country, the principle of equality was incorporated in its preamble itself to secure for all its citizens Justice – social, economic and political. Separate provisions for reservation were made available from the beginning as well as through various insertion of provisions through constitutional amendments. Reservation in education and employment was the major mode of dispensing social justice to the deprived. To the extent specific constitutional provisions are available, the rulers are not keen over implementing both in quantum and effectiveness.

Inadequacy in the representation of the deprived has been continuing as the governing phenomenon in the country. When the governing code of the country is for the dispensation of social justice, the rulers who take oath of office to abide by the Indian Constitution are reluctant to dispense it and even remain as a hurdle. This has been the continuing phenomenon in the governance since independence. The intensity of its dispensation has been minimised since BJP headed alliance assumed the Central governance. The ideological base of BJP viz. RSS has openly expressed its stand many a times against reservation. The entire regime of BJP since 2014 has been placing a lot of hurdles for the Scheduled Castes (SCs), the Scheduled Tribes (STs) and Other Backward Classes(OBCs) to avail their rights of reservation provided by the Constitution.

The NEET imposed on all the medical and dental college admissions in UG, PG and Super Specialty courses has deprived the chances of many marginalised pupils in the society. In respect of All India Quota (AIQ) of seats contributed by the States, not even a single aspirant belonging to OBC who is qualified under NEET has been admitted so far. When all the mainstream political parties in Tamil Nadu filed writ petitions separately for OBC reservation in AIQ, the Madras High Court decided that the State specific reservation on AIQ could be implemented for which a committee with representation from the State, Union Ministry and Medical Council of India may be constituted to work out modalities within a period of six months. Till date no corrective solution is arrived at, thereby there is every likelihood of admitting students in AIQ devoid of OBC reservation. Whenever the Supreme Court direction/verdict is in support of Centre’s stand on reservation, the judiciary has been quoted by the Centre. If the judiciary is against the Centre’s stand, then the delaying tactics sustains. Overall the marginalised pupils are unable to get the reservation benefits.

Horizontal reservation of 7.5 per cent

Due to the inadequacy of students who had studied in Government Higher Schools in medical and dental admission, the State government of Tamil Nadu based on recommendation of the report given by a High Court retired judge, issued G.O. enabling 7.5 per cent reservation for that category of aspirants within the total existing reservation. Based on it 375 students studied in government schools, many of whom belong to the first generation coming to college education have got admission in the current academic year. The Centre has objected by filing an affidavit based on the notice served in a Writ petition, stating that the horizontal reservation of 7.5 per cent would affect the merit and standard. The State government has filed its affidavit that all the students admitted under 7.5 per cent horizontal reservation quota hail from socially, educationally backward classes.

The Madras High Court has already decided that State specific reservation is applicable for AIQ in medical and dental admission. No concrete solution has emerged from the Centre to provide reservation to the deprived, especially OBCs. The Supreme Court has given verdict in Tamil Nadu Medical Officers’ Association & Ors Vs Union of India & Ors case that the State can decide their own reservation policy. The Tamil Nadu State Government has brought 7.5 per cent horizontal reservation in the State Quota of medical admission for the students who had passed from government schools. The Centre has taken a contrary view not only to the State but also to the principle of equality and equal opportunities to all as adumbrated in Indian Constitution.

Is Ph.D. qualification a must, for Asst. Professor?

Recently the University Grants Commission (UGC) has issued a notification to State governments and the universities. The notification has made the qualification of Ph.D. compulsory for the recruitment of Assistant Professors in colleges and universities. Many of the candidates who have become graduates, post graduates hailing from socially and educationally backward classes including the Scheduled Castes and the Scheduled Tribes could not complete Ph.D. at a stretch due to their economic background. If the notification of UGC is implemented the scope of reservation for Assistant Professor posts for SCs, STs and OBCs would be lost for want of candidates from the respective deprived categories, resulting in filling up of the vacancies with the candidates from the upper castes. It will affect the very purpose of dispensation of social justice. How can a deprived family that was denied education in earlier generations produce a Ph.D. all of a sudden in a new generation? The BJP at the Centre with obsession against reservation has not applied its governance sincerely from social justice angle. The notification of UGC is a proof of it.

The Centre has formulated the National Education Policy 2020 without consulting the main stakeholder, the States. The peoples’ policy, the major section of whom were denied education for many generations, has not mentioned anything about dispensation of social justice, the integral feature of the Constitution of the country. The deliberate move of saffron rule sabotaging the rights and welfare of the deprived must end. Otherwise the deprived lot would end the rule by exercising their voting power at the time of election.