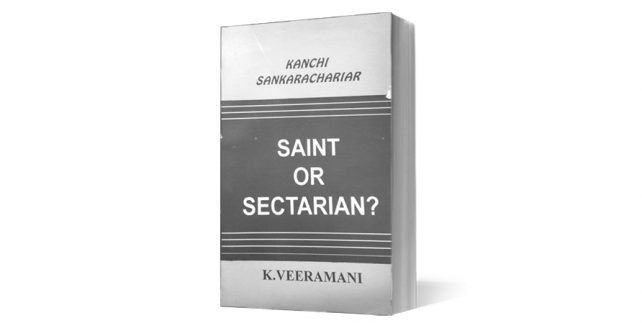 ….Continuation from the previous issue

Being an empire by itself, “The Hindu” had extended an invitation to the Parliamentary delegation for a tea party, which had been accepted by them. There is a protocol that such a delegation cannot accept any invitation to a party offhand but that invitation had duly been processes through the Delhi Headquarters and a lot of spadework had been done by Sankarachariar’s men at various levels at various places to make the delegation agree to participate in the party arranged by the Hindu Editor Kasturi Srinivasan who could easily broach the matter that Sankarachariar wanted, to the delegation. This Agnigotram Thathachariar, who was quite unconnected (?) with this, also joined the party and got an opportunity to talk face to face to the delegation who had not cared to send even an acknowledgement of the innumerable telegrams engineered by them.  He was duly introduced to the Secretary of the delegation by the Editor of “The Hindu” Mr. Kasturi Srinivasan. Then Agnigotram Thathachariar asked the secretary of the delegation why there had been no reply to the telegrams sent to him, to which the latter replied. “Don’t ask me about it. Ask Mr. Sorenson M.P. about it.” Agnigotram Thathachariar writes thus.

“As matters were so quickly developing, I had no time to prepare any written memorandum. I explained by word of mouth to Sorenson the desperate condition of our religion and religious institutions and drew his attention to His Holiness’ idea of getting Constitutional safeguard to these. Sorenson was kind enough to ask me to meet him in Delhi”.

Is it necessary to tell you plainly that the main object with which the party arranged in ‘The Hindu’ office had been carefully planned for this purpose only? How easy and handy these methods are for these people? Mr. Sorenson had to ask Agnigotram Thathachariar to meet him in Delhi when the latter put forth to him the desire of Sankarachariar. He writes.

“I returned to His Holiness to break the news of the wonderful turn of events. After a little meditation, His Holiness advised us to prepare a memorandum touching upon religion as a fundamental right”

Please note the mark of exclamation used by him next!

It has to be noted that if the safeguard to religion formed the basis of the Fundamental Rights chapter enshrined in the Indian Constitution,  it was mainly through the strenuous efforts of Sankarachariar. Agnigotram Thathachariar continues

“I met Mr. Sorenson at Delhi and submitted our memorandum”.

Agnigotram Thathachariar went to Delhi and met the British parliamentary delegation when it visited there in 1946 with the memorandum as suggested by Sankarachariar. The memorandum did not bear fruit as the delegation did not succeed in its mission. This delegation was followed by another under Sir Stafford Cripps. Again Sankarachariar’s delegation met the Cripps delegation and pressed their claims. But Mr.Cripps very cleverly told them that they might as well meet the Indian political leaders who might be entrusted with the drafting of the Constitution soon after India was granted independence. Agnigotram Thathachariar goes on.

“Anyhow, we made bold to meet Sardar Patel and spoke to him about religious freedom. He just flared up to say that Hinduism spoke with different tongues and was not fit for survival”.

Sardar Patel gave them a good rebuff as he was considered a strong non-Brahmin. Then they arranged for a meeting of all madathipathis. On the advice of Sankarachariar, they convened an “all-India madathi-pathis conference” and started their work in right earnest.

They often cite articles 25 and 26 of the Constitution as applying to religious safeguards whatever social reforms are contemplated by Government. It is as well that our non-Brahmin leaders who do not have a sense of solidarity and interests of the community at heart note the assiduity of Sankarachariar and to what extent he, as the leader of the Brahmin community, goes to safeguard their interests. With this back ground let Agnigotram Thathachariar speak what had taken place next:

“India became independent. The constituent Assembly was set up to frame our great charter. In the great excitement of those days, none seemed to pay any attention to religion and religious institutions as subjects to be covered by the fundamental rights of the Constitution. The Thapasvin of Kanchi was then camping at Anobi village”.

“He called forth eminent lawyers of Madras to suggest suitable clauses concerning religion and religious institutions for inclusion in the Constitution”.

A draft was prepared but the adviser of the Constituent Assembly pointed out that such an elaborate one was not necessary. What happened next? Let us hear Agnigotram Thathachariar:

“The suggestion of His Holiness was welcomed by the constitutional Pandits wholeheartedly and with a sense of wonder at His Holiness legal acumen.”

They got it done by the Constituent Assembly by simply adding the phrase “In accordance with law”. He continues:

At His Holiness’ behest, a representation was made to the members to suitably correct the clause at the stage of the second reading. When we met Dr. Ambedkar in this connection, we did not have any hopes, because we knew of his staunch and stern views. But behold the power of Parmachariar’s penance! Dr. Ambedkar told us in all earnestness that he was for religion and religious institution. He declared that religion and religious institutions must certainly be free from the interference of the State. Things went on smoothly and ultimately clause 26 which deals with religious institutions was split into two parts by the framers of the Constitution, so that the restrictive phrase “In accordance with law” applies only to the fourth part”.

They met Dr. Ambedkar and applied some pressure on him to accede to their request. It should be noted here that the Experts Committee of the Constitution contained six members with Dr. Ambedkar as president. He was appointed President not only to utilize his legal acumen but also to gain publicity for their so-called liberalism in choosing an Adi Dravida for that high post. Though Dr. Ambedkar was the President and another Muslim, Mr. Mohommed Sadulla was a member of the Committee; all the other four members were Brahmins, three of whom were from Tamil Nadu and one from Gujarat. Ultimately, the final decision rested with the majority of the four Brahmins and their opinion prevailed. Dr. Ambedkar was made powerless. That is why he roared at a later date in the Rajya Sabha, “They say that I framed the Indian constitution but the truth is not that. Therefore I would be the first man to burn it too.” Yet Agnigotram Thathachariar cleverly says that they managed to cause a change of heart in Dr. Ambedkar (He does not say how. Were the services of any Mohini utilized for the purpose as usual?) Agnigotram Thathachariar adds

“Now in its final form, Article 26 of the constitution reads as follows:

“Every religious denomination or any section thereof shall have the right (A) to establish and maintain institutions for religious and charitable purposes. (B) to manage its own affairs in matters of religion. (C) to own and acquire moveable and immovable property and (D) to administer such property in accordance with law.”

In other words any religion or religious denomination or section has absolute freedom to function. What sort of freedom is that?