SATYAGRAHA IS A WASTE OF TIME 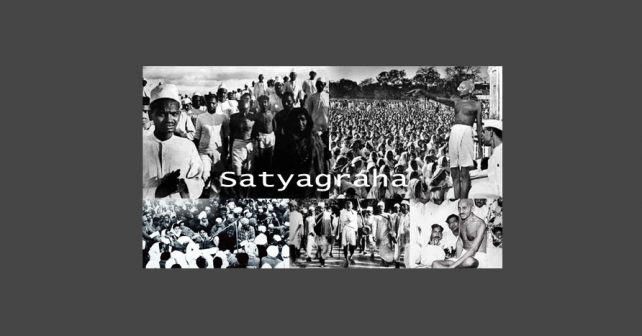 Every one of our comrades knows that satyagraha is sheer obduracy, which leads to unnecessary hardships, diminishes initiative and encourages servility. That is why we have already been opposed to satyagraha.

It is well known that satyagraha is of little use in the political field.  Some, however, used to believe that it may be of use in mitigating social evils.  But we have clarified in our Virudunagar Conference and the conferences that followed it, besides our Kudi Arasu, that even that belief is futile.  Our stand has been proved correct through a decree pronounced by Nasik District Magistrate Mr. L.N. Brown in a clash between the untouchables and the sanatanists as a result of the satyagraha by the former.

There are four sacred ponds in Nasik called Ramkund, Lakshmankund, Dhanurkund and Sitakund.  There is a pathway called santava to go round these ponds.  The untouchables offered satyagraha demanding the right to bathe in these ponds and walk on santava. The sanatanists quarreled against them.  At the end the magistrate ordered that he believed that the untouchables had no right to bathe in the ponds and walk on the pathways, and as per CPC 147 – Section 3, he ordered that they should neither approach the ponds nor bathe in them.  The details of his judgment are:

“On the whole I believe that the untouchables have no right to approach or bathe in the four ponds. As per CPC 147 Section 3, I prohibit the Mahars, Mangars, Todars and other untouchable castes from approaching or bathing in the four ponds of Ramkund, Lakshmankund, Dhanurkund and Sitakund.  Until the untouchables get an order from the Civil Court they have no right to approach the ponds or bathe in them.

If an act were passed granting the right for everybody to go to all public places, then undertaking of satyagraha against those who act against the law and obstruct people using them may be of some use.

The travellers who go round the ponds use the path santava.  It is another question if it could be used as a public road.  It is learnt from witnesses that well dressed Christians and Muslims are permitted to walk through the path. But those witnesses are not applicable to this case.  It has not been revealed in the case concerning the untouchable Hindus that they have the right to use santava.”

We want it to be noted that it has been clarified in the magistrate’s order that only the Hindu untouchables have no right to walk on the path used by people of other religions like Christians and Muslims.  For such an order to be pronounced, only the stubbornness and blind customs of the Hindus are responsible, are they not?  Has the magistrate not passed his order based on these customs and traditions?  Until we have laws and justice which support such practices, what justice can the untouchables expert to get through performing satyagraha?

Hence the only thing for those who are after social and religious rights to do is to agitate for the passing of proper law.  If an act were passed granting the right for everybody to go to all public places, then undertaking of satyagraha against those who act against the law and obstruct people using them may be of some use.  For, they have the right and are also protected by law.  Even the authorities cannot promulgate prohibitory orders.

Hence, the best method for the oppressed and the untouchable is to siege political power and to enact laws to protect their rights.

Yet, we do concede that as far as the untouchables are concerned, satyagraha can be used as a means of propaganda to express their desire to attain freedom, and it could be of some benefit to them.

The renowned research institute, ‘Central Food Technological Research Institute (CFIRI), Mysuru has failed in its bid of ensuring the quality standards in the preparation of the so called sacred ‘prasadam’ at major temples across the country. The Food Safety and Standards Authority of India (FSSAI) has expressed its inability to enforce such regulations. FSSAI is responsible for food safety and regulations and it should evaluate the quality of the ‘prasadam’ at major temples at national level. But it claims that they have no mechanism in place for such quality evaluation. The main reason for the inability to put in place a regulation for preparation of ‘prasadam’ is strong opposition from temple authorities to external intervention in the affairs of the shrines.
More than the quality of the ‘prasadam’ it is the hygienic environment while preparing it is important. How does it amount to external intervention in the affairs of the shrine?
The temple authorities seeking protection under the banner of religious freedom to supply substandard and unhygienic ‘prasadam’ to the devotees? This is the sorry condition of the secular state.