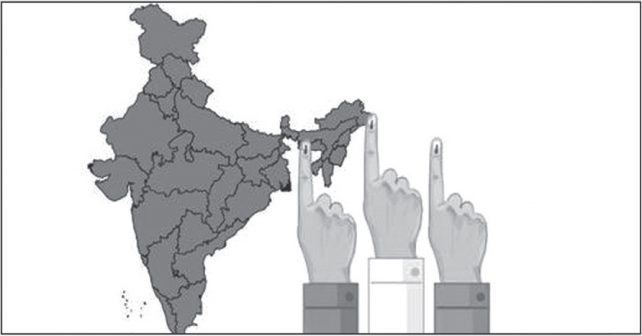 Since independence, many political parties have been mandated by the people to rule the country either by their individual strength or in alliance with like-minded parties. Invariably all the political parties would promise to the electorate on the developmental front of the country and the welfare of the citizens. The degree of performance on the promises made may vary from one party to another. But they have all respected the polity of the State as enshrined in the Preamble of the Constitution with due honour to the unity of the country, recognizing the diverse cultures, languages etc.

The RSS backed BJP which assumed power at the Centre in 2014 has been systematically deviating from the path the previous rulers had treaded; in fact many of their governance tasks are aimed at changing the fundamentals of the democratic fabric, so far systematically sustained. The dictatorial attitude has been pronounced throughout the BJP tenure, which succeeded in grabbing the power in various States where it failed to get absolute majority; it had the least compunction in derailing the party which had secured more seats than BJP in the respective assembly election. The chest thumping by RSS-BJP that the number of BJP ruled states has increased as if the trend is a success to the saffron ideology which is anti-constitutional  and against democratic sentiments.

The core thread in the State governance had deteriorated creating setback in all fronts, the rectification of which would itself require another term for the succeeding rulers. Maximum damage has been caused during the current BJP led NDA regime under the Prime Ministership of Narendra Modi. Change is a must when it is warranted for effective governance, but not for the sake of change alone. But Modi’s tenure started with replacement of the time tested Planning Commission with toothless NITI Ayog. The replacement exercise still continues in respect of Medical Council of India, University Grants Commission and many other bodies. The deficiencies in the present system should not be aggravated and made incurable. Many of the heads of the vital governing and monitoring institutions like RBI, Chief Economic Advisor, National Statistical Commission etc. tendered their resignation before expiry of their tenure, unable to cope with the arbitrary decision of the rulers.

On the planning side, the worst policy measure was ‘demonetization’! When, in the global economic scenario, recession prevailed in 2008 it did not cause any significant disturbance in our domestic economy. To that extent the Indian economy was shock proof and shock absorbing. After demonetisation by the BJP rulers, the production units, more in unorganized sector, which had fallen down have not risen till date. The employment opportunities for the upcoming youth has not only become stagnant but declined. Major chunks of black money were laundered defeating the purpose of the ‘demon’ exercise. Under tax reforms, the introduction of GST has compounded the tax management, curtailing the fiscal rights and capacity of the States, with a negative bearing on the federal polity of the country.

Deliberate imposition of Hindi and Sanskrit throughout the country as per the ideals of RSS is gaining momentum.  Undue importance to Vedic education, equating it with the system of versatile syllabi will cause heavy damage to the educational opportunities of the posterity. Scientific temper, the development of which is specified as a fundamental duty of every citizen has been made a laughing stock even by the responsible persons at the helm including Prime Minister Modi and his Council of Ministers. Portrayals of the postures in the puranas and scriptures as science by the saffron rulers have been ridiculed and condemned by the international scientific fraternity.

The rural distress especially on farmers’ front and landless agricultural labourers is surmounting alarmingly. Suicides of farmers due to indebtedness caused by the farm failures are on the increase. All the welfare schemes of the present rulers remain mere rhetoric with insignificant beginning, ignoring the vast and wide requirements. The Minimum Support Price, projected as historic by the BJP has been of the least benefit to the farm producers.

At the fag end of the tenure, conducting surgical strike and air attack on the neighbouring country to camouflage its five year failures has yielded nothing.

The common man suffers a lot due to rise in the prices of essential commodities. Earlier it was explained as an effect of global price rise. The trend is sustained despite the fall in global price of, say,  crude oil, exposing the inability of the saffron rulers to divert the benefits of global price. This policy of BJP has kept the common man in perpetual economic misery.

The concept of social justice is put in peril by introducing ‘economic criterion’ in reservation policy to the section which is not deprived historically due to its caste identity.

Addressing the public unilaterally has become the routine for the rulers. It was common in the Parliament for Prime Minister Modi to remain unmoved during vital debates. During the five year tenure, Modi has addressed not even a single press meet. Such disrespect they possess for the democratic debates and public discourses.

The trend of setback is on continuous increase with scant respect for democracy. The saffron rulers are committed to their tasks, unmindful of the detriments it has caused to the citizens. They are not prepared even to listen to the other side views though not accepting them; it is very difficult, in fact impossible, to wake up a person who pretends to sleep. BJP led NDA is like that. Many a regional party is also with them, the prime among them being the ruling AIADMK in Tamil Nadu.

The only remedy presents itself in the form of the forthcoming general elections to the 17th Lok Sabha. The democratic rights of the people have to be focused against the saffron rule led by Modi to ensure its defeat. Silent revolution must take place on the ‘Day of Election’ by single finger pressing of every voter on the appropriate, alternative symbol in the Electronic Voting Machine (EVM).

‘Save Democracy’ and make Saffron Step Down!