School Breakfast Scheme Must be Secular! 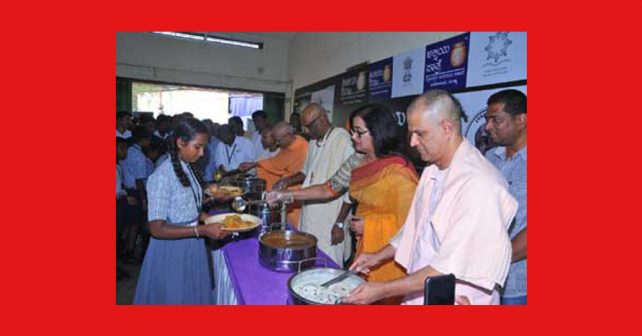 The present rulers of the State of Tamil Nadu with the sole motive of populism have started the breakfast scheme for school children. At the outset it had appeared welfare oriented and slowly the scheme has been handed over now to ISKCON – Hare Rama Hare Krishna, a sect of Hindu religious ideological back up. The NGO is predominated by brahmins and with brahminical culture and food habits and that is reflected in the food preparation, supplied under the breakfast scheme. Usually brahmins would avoid garlic and onion in their food preparation and their cuisine. That was explicitly expressed by the present union finance minister in Parliament when a question was raised on the price rise of onion. Instead of giving the reasons for the rise and stating the remedial action taken by the government, she pointed out that she does not take onion in the food menu, as if she is the finance minister for the brahmins alone. No one can deny the anti oxidant effect and anti carcinogenic medicinal value associated with garlic and onion. If an individual brahmin does not prefer spices it can be left as his/her food choice and habit. Such choice and habit should not be thrust on others that too in a welfare scheme introduced for school children by the government. The State government is also unmindful to interfere in the modus operandi of the scheme run by ISKCON. How can a secular government facilitate the adherence of food habits of a particular sect for the entire children of the schools? This is a gross violation of the secular governance.

The Tamil Nadu State Government has not acted properly in allowing ISKCON-sponsored NGO to serve breakfast for the school children without observing the administrative formalities. When the government had decided to hand over the breakfast scheme to school children to private people, is it not warranted to reveal the decision in public domain? Whoever is interested may come forward to undertake the scheme. Among the interested, the government has to choose the concern that is better among them. While entrusting the scheme to private, the secular nature of its implementation has to be ensured. Undue favour to NGOs who are ready to introduce their religious tinge cannot be accepted at all. Even in respect of the academic syllabus taught to students, undue importance to any particular religion is avoided. How can religious imprudence be applicable to one sect with preferences in the preparation of food items, meant for children hailing from different religions. Both the syllabus taught and serving food to the students have to be secular essentially. The State government can not violate the secular principle adumbrated in the preamble of the Constitution.

Besides, the State Government has donated the sites belonging to the government at two places viz. 20,000 sq.ft. at Chennai – Greams Road and 35000 sq.ft. at Perambur Barracks Road to ISKCON-NGO for the operational usage of the breakfast scheme and Chennai corporation will bear the drinking water and electricity charges at the sites. The Governor of Tamil Nadu has also announced a donation of Rs.5 crores to the NGO.

How can the people’s properties and finance vested with the government be allowed liberally to the advantage of NGO thinking and acting with religious tinge?

Already the ISKCON managed NGOs have been implementing the scheme in Karnataka despite stiff resistance for the deletion of onion and garlic from the side of the government.

Let not the ISKCON play with the health of the school children by adhering to their religious preferences in the food habit. Stronger children and youth are the vital assets of the country.

Let the ISKCON not act with nobility of appeasing the appetite of the needy with religious tinge.

They are answerable to the public. It they are not bothered, the public would teach a lesson at the time of election!