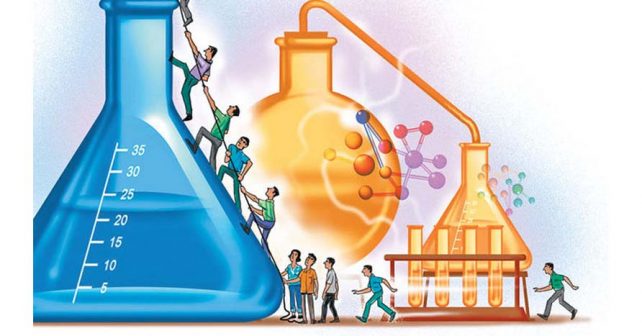 Indian scientists engaged in science, contributing to the understanding of the natural world and developing approaches and technologies to measure or change outcomes well before the Scientific Revolution that began in Europe in 1543. Whether it was the more than two millennia-old Charaka Samhita or the Jantar Mantars of Maharaja Sawai Jai Singh II, science and technology were embedded in the larger fabric of India well before British rule. During colonial rule, while it was not a priority to nurture Indian science, universities were established. J.N. Tata and the Regent Queen of Mysore laid the ground for the founding of the IISc in 1909. When India became independent in 1947, 32 new educational and scientific establishments were set up in 15 years that served as model institutions.

As India strove to throw off British rule, the political leadership, influenced strongly by the builders of the nuclear and space programmes, recognised the need for science for development. In 1958, the Government published its Scientific Policy Resolution, which stated, “The dominating feature of the contemporary world is the intense cultivation of science on a large scale, and its application to meet a country’s requirements.” When the fundamental duties were added to the Constitution in 1976 through Article 51A, the eighth duty stated: “It shall be the duty of every citizen of India to develop the scientific temper, humanism and the spirit of inquiry and reform.” This made the Constitution one of the few that requires the spirit of inquiry and scientific temper as a foundational aspect of society. Jawaharlal Nehru in The Discovery of India, writes, “Scientific temper is a way of life — an individual and social process of thinking and acting which uses a scientific method which may include questioning, observing reality, testing, hypothesising, analysing and communicating.”

Scientific temper can be viewed through two lenses — one of the traditional scientific community and the other of society as a whole. Before Independence, India had leading colonial scientists, such as the botanist Fr Eugene Lafont, who partnered with others to establish the Indian Association for the Cultivation of Science, and J.J. Evershed in the Nilgiris after whom the Evershed flow effect in the chromosphere is named. But there were also internationally recognised Indian scientists such as K.S. Krishnan, C.V. Raman and others who developed their fields but largely on an individual basis. In independent India, the move from competitive individualism to institution building was supported by the government and its policies.

Following the expansive phase after Independence, there has been an explosion of new institutions in the 21st Century, with successful models such as the IITs and the AIIMS being replicated, and new ones such as the IISER being created. These expansions were needed to keep pace with an expanding population and a changing world, but is the trajectory of science what is needed to change India’s place in the global science arena? It is frequently cited that India has been climbing the rankings of countries in terms of publications, and this is true. However, their quality and their acceptance in the highest tiers of publications as well as their subsequent utility remain underwhelming. Students from our best institutions leave India once they graduate. Scientific communities bewail the lack of post-doctoral positions and career opportunities. The government has created fellowships and early-career contractual faculty positions. But these are still the refuge of largely those who for social reasons are unable to move or those who cannot find opportunities outside India.

Beyond academia too, the lack of readiness for other employment among science and technology graduates and doctorates has been increasingly highlighted over the past few decades. Innovation requires both fundamental discovery and its applications. We built many of our research institutions outside of universities that offer a more diverse education. Until recently, industry collaborations were looked down on as something done by scientists who could not make the cut within their own basic research fields or as constituting a conflict of interest. Stand-alone institutions and the lack of linkages mean that we have neither the critical mass for academic competitive excellence in many fields or the ecosystems for innovation.

There are attempts to change. The Science, Technology and Innovation Policy of 2020 states that in order for India to “march ahead on a sustainable development pathway …towards achieving an ‘Atmanirbhar Bharat’, a greater emphasis may be needed on developing traditional knowledge systems, developing indigenous technologies and encouraging grassroots innovations”. The CSIR and the Departments of S&T and Biotechnology have attempted to advance science through their schemes, but intentions needed to backed by resources at scale.

The COVID-19 pandemic resulted in increased resources as well as an awareness of science in society. When newspapers track numbers and try to decipher what they mean, it is an opportunity to communicate the value of science and counter the challenges brought about by a lack of scientific temper. This need was recognised by many ‘peoples’ science movements’ of the 1970s, similar to the Kerala Sasthra Sahithya Parishad established in 1962. This issue of ‘escape into magical beliefs and instant solutions’ was and is recognised by scientists too, but their channels of communication with society remain limited, reflected in wide spread disinformation during the pandemic with the burgeoning of beliefs in unproven methods of treatment.

Are science and scientists trusted and heard in India? Our space and nuclear programmes are widely lauded and trusted. They, and some fields of mathematics and chemistry, grew because of individuals who persuaded the government to invest in institutions and to support them outside of the bureaucracy. Other fields have not done as well, either with society or with government.