SECULAR IN SPIRIT AND IN LETTER 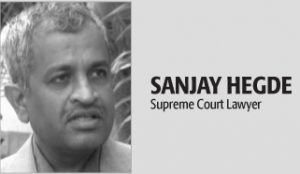 Secularism is inherent in the basic structure of the Constitution. The Home Minister cannot presume to forget constitutional history, and assume that constitutional values such as secularism are just meaningless words to be redacted from a document

The framers of the Constitution worked against the backdrop of two great instances of human carnage — World War II and the Partition of India. Both were the result of an insistence on distinctiveness of group identities and their consequent territorial demarcations, which excluded those who did not fall within the dominant group. Simultaneously, the process of integration of princely states meant that people not exposed to even limited democracy became voters of a republic that promised justice, liberty, equality and fraternity for all.

The state of the country, as Justice Aftab Alam reminded us in his Gandhi Foundation annual lecture in 2009, was that it was “home to eight major religions of the world. The Constitution of India recognises 22 languages as Indian/national languages. Indians speaking the same language may belong to different religions. Conversely, Indians belonging to the same religious group may come from different ethnic stocks, may speak different languages, dress differently, eat different kinds of food in entirely different manners and may have completely different social and economic concerns”.

In a nascent republic, where power had for the first time been vested in the diverse, heterogenous people of the subcontinent, the Constituent Assembly became a trustee and demarcator of the extent of that power. The document that they produced after two years of intense debate and labour had words of comfort for everyone.

Secularism is implicit in the entire constitutional framework. What does secularism in the Indian Constitution mean? The question admits of no easy answer and cannot be restricted to textual interpretation alone. It is a constitutional value that seeks to manage India’s diverse and plural society, in an atmosphere of cohesiveness of national purpose.

There are however provisions which seek to enforce equality within the Hindu religion in Articles 17 and 25(2)(b). Deference to Hindu sentiments on cow slaughter is also provided for in Article 48, as is the pious hope for a uniform civil code in Article 44. Taken as a whole package, the constitutional vision of secularism is one of principled equidistance from all religious matters, while at the same time regulating its practice in a manner consistent with the demands of a modern society. Crucially, in Article 25(2)(a), we can find constitutional permission for the state to regulate or restrict “any economic, financial, political or other secular activity which may be associated with religious practice”.

Thus, it is fallacious to argue that the original Constitution as adopted, enacted and given to ourselves on November 26, 1949, was not a secular document. The inclusion in the Preamble of the words “socialist” and “secular” by the 42nd Amendment on January 3, 1977, only headlined what was already present in the original text of the Constitution.

We must also remember that the Preamble itself was drafted only after the Constitution was approved by the Constituent Assembly. The Preamble thus became a one-page mission statement of the republic’s intent.

In fact, there is an illuminating discussion in the Constituent Assembly debates of November 15, 1949, when Professor K.T. Shah wanted to include the words “secular, federal, socialist” in Article 1 of the Constitution, the article that now reads, “India, that is Bharat, shall be a Union of States…”

Prof. Shah said, “As regards the secular character of the state, we have been told time and again from every platform that ours is a secular state. If that is true, if that holds good, I do not see why the term could not be added or inserted in the Constitution itself, once again, to guard against any possibility of misunderstanding or misapprehension… The secularity of the state must be stressed in view not only of the unhappy experiences we had last year and in the years before and the excesses to which, in the name of religion, communalism or sectarianism can go, but I intend also to emphasise by this description the character and nature of the state which we are constituting today….”

Dr. B.R. Ambedkar, in reply, said, “Mr. Vice-President, Sir, I regret that I cannot accept the amendment of Prof. K.T. Shah. My objections, stated briefly, are two. In the first place the Constitution, as I stated in my opening speech in support of the motion I made before the House, is merely a mechanism for the purpose of regulating the work of the various organs of the state. It is not a mechanism whereby particular members or particular parties are installed in office. What should be the policy of the state, how the society should be organised in its social and economic side, are matters which must be decided by the people themselves according to time and circumstances.

But it would be perfectly possible for thinking people to devise some other form of social organisation which might be better than the socialist organisation of today or of tomorrow. I do not see therefore why the Constitution should tie down the people to live in a particular form and not leave it to the people to decide it for themselves. This is one reason why the amendment should be opposed. The second reason is that the amendment is purely superfluous. My honourable friend, Professor Shah, does not seem to have taken into account the fact that apart from the Fundamental Rights, which we have embodied in the Constitution, we have also introduced other sections which deal with Directive Principles of State Policy… What I would like to ask Professor Shah is this:

If these directive principles to which I have drawn attention are not socialistic in their direction and in their content, I fail to understand what more socialism can be. Therefore my submission is that these socialist principles are already embodied in our Constitution and it is unnecessary to accept this amendment.”

Prof. Shah’s amendment was defeated but two things stand out in this exchange. First, the economist in Dr. Ambedkar dominated his exchange with Prof. Shah. He only discussed the economic philosophy of the Constitution and did not deal with the questions of secularism and federalism. Second, he felt that what was already explicit in the Constitution need not be reiterated.

On April 24, 1973, the Supreme Court, with its then full strength of 13 judges, ruled in the Kesavananda Bharati case that secularism was part of the basic structure of the Constitution. It also held that elements constituting the basic structure were beyond Parliament’s power to amend the Constitution. The court reiterated this principle in 1994 in the S.R. Bommai case when dealing with the challenge to the dismissal of four Bharatiya Janata Party-ruled State governments after the demolition of the Babri Masjid.

Despite the Constitution’s secular nature being held to be part of its basic structure, matters did not rest. During the Emergency came the 42nd Amendment on January 3, 1977. Apart from many significant changes otherwise, it resurrected Prof. Shah’s cosmetic suggestion and inserted the word “secular” in the Preamble. After the Emergency, the 44th Amendment by the Janata government undid most of the substantial damage achieved by the 42nd Amendment. But it, too, chose to preserve the addition of the words “socialist” and “secular” to the Preamble.

The Law Minister who piloted the 44th Amendment was Shanti Bhushan. His colleagues in the ministry were L.K. Advani and A.B. Vajpayee. Their inheritors today cannot presume to forget constitutional history, and assume that constitutional values such as secularism are just meaningless words to be redacted from a document. Secularism is inherent in the basic structure of the national book, and is beyond the power of any transient parliamentary majority to efface or abridge.