“SEEDS OF RESERVATION WERE SOWN FIRST IN TAMIL NADU” 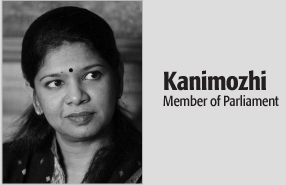 The seeds of reservation were first sown in Tamil Nadu, said DMK Rajya Sabha member Kanimozhi and explained that the very first Government reservation policy was the Communal G.O. which was passed in the then Madras Legislative Assembly in 1921 when the Justice Party, the parent organization of the DMK, was ruling the then Madras Province.

Participating in the debate of Constitution Day and the contribution of Dr. B.R. Ambedkar in the House on November 30, Kanimozhi said:
Excerpts of the speech

“Today, we pay tribute to Babasaheb Ambedkar, the man who gave the constitutional sanction to the social awakening of this country. Sir, when Pratulji was speaking here, he actually mentioned about an incident where people actually had problems when Dr. Ambedkar’s name was taken up to be the name of a Law University in Maharashtra. I would like to proudly say that when this issue started in Maharashtra, our leader, Kalaignar, when he was the Chief Minister in Tamil Nadu, named a Law College after Dr. Ambedkar just to show that we will be the leaders in respecting Dr. Ambedkar.

Social justice secures a special status in our Constitution for all citizens of this great nation. The term “Justice” in the Preamble of our Constitution embraces social, political and economic aspects. Affirmative action is a way of achieving social justice to the historically disadvantaged sections of the society. The first amendment to the Constitution of India in 1951 which secured ‘reservation policy’ is proof that all the great leaders who provided us this Constitution themselves worked and advocated for this principle. Sir, this is the basis of the reservation policy which is explained in Article 15. It tells us not to treat unequals equally. 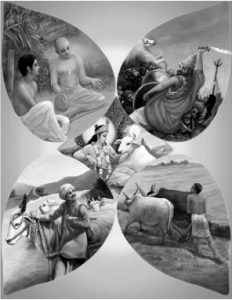 The seeds of reservation were first sown in Tamil Nadu. The very first Government reservation policy was the Communal G.O. which was passed in the then Madras Legislative Assembly in 1921 when the Justice Party was ruling the Tamil Nadu State. The Justice Party was the parent organization of the Dravida Munnetra Kazhagam. We are proudly a part of this legacy, and our ideological leader, Thanthai Periyar, fought for social justice and scientific temper. He led the protests at Vaikom in Kerala. He led the protest there in a street next to the temple.

People from the Scheduled Castes, Scheduled Tribes and the backward communities were not allowed to walk on those streets. He led that struggle and Babasaheb Ambedkar has spoken about the Vaikom struggle as an inspiration for his Mahad Satyagraha, where he led thousands of people belonging to depressed classes for access to a local pond.

Unfortunately, even today in this country there is a struggle. The Dalits and people from different communities in many parts of this country are still stopped from having access to drinking water wells in many villages and even when houses are rented out, you see advertisements sayings and the houses would be rented out only to people of particular communities. You know, there are castes, there are communities and there are problems of untouchability in different forms even today. It is a very sad situation.

We must understand that reservation can actually reach its peak and justice can be done only when there is a Caste Census. The need for a Caste Census has been there since the time of Independence. The first Backward Classes Commission in 1955 had recommended that. Subsequently, the Second Backward Classes Commission, popularly known as the Mandal Commission, recommended 27 per cent reservation for the OBCs.

The DMK, when it was in Government in Tamil Nadu, ensured that the OBCs, SCs and STs were duly given their fair share in reservations and we have also given reservation to the Arundhathiar community. But we have to make sure that the Caste Census is given out.

It is very sad to note the unwillingness of the Central Government to release the data on Caste Census; it is still not out and is not available. Without that data, definitely reservation cannot be done fairly and in a just manner. This is a very important thing and the Central Government must take steps to see to it that the data are available to the people.

This amendment was upheld by the Supreme Court in 2006. On December 17, 2012, this House passed a Constitution Amendment Bill, which declared that all the Scheduled Castes and Scheduled Tribes notified in the Constitution shall be deemed backward. But this lapsed because it was not passed in the Lok Sabha. I urge this Government to take up this Bill in the coming Session. Along with the SCs and STs, OBCs should also be given reservation in promotions, as it is evident that they too are not adequately represented in the services, even after giving 27 per cent reservation for them two decades ago.

The social vulnerability of Dalits and other disadvantaged sections of the society still remains even after the reservation policy which was meant to uplift them. The protection given to them through legal measures such as the Protection of Civil Rights Act, 1955 and the Scheduled Castes and Scheduled Tribes (Prevention of Atrocities) Act, 1989 have not been enough.

lf we take a closer look at the violence against these communities in recent times, incidents such as the murder of two Dalit children near Faridabad on 20”‘ October, 2015, vindicate this fact. Even after close to seven decades of Independence, atrocities against Dalits and honour killings continue. We have all been reading about it and we know that in different parts of the country we have issues like these. They have not been eradicated from our society.

I would like to cite an example here. When the DMK Government was in power in the Government in Tamil Nadu, it brought forth a legislation saying that if people from different communities could learn the rituals, mantras, etc. in a temple, anybody from any community could become an archaka.

People who believe in Hinduism, who believe in serving God want to become archaka and want to enter the temple and the sanctum sanctorum, are denied rights; they are denied opportunities to do that just because they do not belong to a particular caste. This case is in the Supreme Court. We have not found  answer to these questions. But I think the mindset of the community and definitely the Government can play a very important part in changing this.

The next thing I would like to talk about is what Dr. Ambedkar says, “I measure the progress of the community by the degree of progress which women have achieved.” The Women Reservation Bill has been languishing after being passed in this House for quite a few years. Again, when we talk about empowerment of women and improving the situation of women in this country, we rarely mention the fact that we are not adequately represented in the highest decision-making bodies. When we passed the Companies bill recently, we included provisions for women in the Board of Directors of companies.

However, the Parliament is yet to practice what we preached.