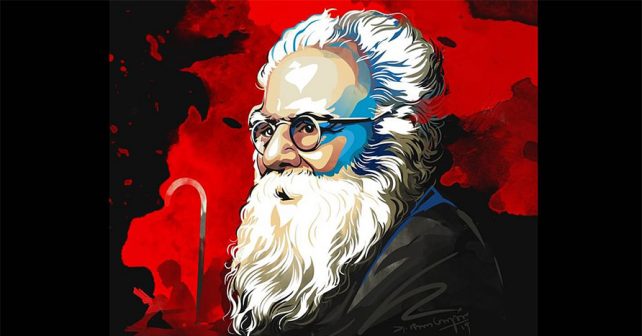 During 1927, Thanthai Periyar set out like a wild storm to spread his ideal and policy of Self-Respect all over Madras Province. His propagandist speeches in Thirunelveli and Palayamkottai etc. were briefly covered by the magazine ‘Kudi Arasu’, in its issue dated Feb 27, 1927. Excerpts from the speeches are as follows, in nutshell:

“Dear comrades and gentlemen I have been delivering speeches time and again in these regions. I have visited now to speak more or less on the same issues. But compared to those days of the past, today I find a much more enthusiastic crowd which has thronged the venue to listen to me. For a moment, I was confused it my policies have undergone any change with the passing of time. But I realise that I can always consistent in my belief and principles. I am steadfast in my policies without even an iota of change.

Before my association with Gandhi and congress I had my own firm views about many issues. They still remain unchanged. Prior to the non-cooperation movement, an exclusive Madras Presidency Association was formed to fight for the political and societal rights of the non-brahmins. I did play a vital role in it.

When I was associated with the Congress and had an affinity with Gandhi, our mission was achieving community-wise representations in all the spheres of the Government. Gandhi and I were uniformly on the same wave-length of principles. We had constructive objectives such as abolishing untouchability and banning the sale of liquor. Those objectives have taken deeper roots in my heart today. I believe that class struggle in our country cannot cease unless we achieve community wise and caste-based representations. Unity among various castes and communities is impossible if equal representations are not ratified. Fulfilment of constructive plans above can pave the path for self-rule (‘Swarajya’) in my opinion. Achieving equal representations and self-rule are the two major goals intertwined with every vein in my body. These two achievements alone can help our people acquire self-respect in life. No amount of physical torture can make me deter from my objective. I am soaked completely in it.

People who patronised me long ago in the issue of community-wise representations later changed their stands and exhibited different colours like chameleons. I understood their political gimmicks and hypocrisy. The betrayal of my supporters never tired me. Selfishness and ulterior motives of people in the Congress coterie merely caused a disillusionment and a sense of frustration motivated elements had clashes even with Gandhi and I could not get along with any of the Congress leaders. I quit them later and started striving with my own moral courage and unflinching resolve, with my vision and mission.

Brahmins derive no benefits out of handloom cloth made by hand-spun yarn. They prefer luxurious fabric woven by machines. Brahmins do not suffer from starvation, poverty or hunger. They are against manual wearing and khadi apparels.

These brahmins pull wool over our eyes by pretending to support handloom apparel production but it is absolute deception. Their target is our votes during elections. They expect us to caste our votes for their prosperity-not for our welfare. We are merely being exploited in all respects. They are self-centred with malicious intentions.

Similarly, brahmins are least bothered about abolishing untouchability. They assassinate our character and label us as illegitimate people, born out of wedlock. These monopolising, dominating elements would at no cost agree to live as our equals. If untouchability is eradicated, they are very well aware, they would lose their identity as brahmins. It is ridiculous to expect them or the outfits patronising them to strive for social justice and equality in society. A few brahmins consume food unwillingly in the houses of untouchables, cobblers, Naickers or Nadars but they oppose all the resolutions passed for their welfare.

Brahmins would not support us even in banning liquor. Some of them do consume liquor but they are too moderate in it and careful enough to prevent sufferings to their families. They derive inexplicable benefits even out of the consumption of liquor.

These brahmins pretend to be social reformers and grab the affinity of influential people. They smartly grab coveted posts in government departments and amass wealth. They never become addicts to liquor like some people who are downtrodden and are very poor.

If non-brahmins reach glorious heights in life, these brahmins will never be able to thrive as advocates and administrative executives in lucrative posts. They can lead a comfortable life as long as our people exist as liquor addicts. If our people become teetotalers, brahmin lawyers would have to start coffee shops for survival. Most of them would eke out a living as astrologers or begin seeking alms. Hence, to expect brahmins to support liquor-ban is to expect a wolf to pity a sheep. Appearances are always deceptive. This is true in the case of brahmins. Their masks are invisible.

Therefore I have completely ignored all the forums dominated by brahmins and outfits associated with brahmins. I have now come to noble associations who are genuine and honest in principles. Your sentiments and brotherhood proves how conscious you are all about your responsibilities. Your duty consciousness has immensely impressed me.

I recall how our resolutions were once passed and adopted in the conference at Madurai. The spread of khadi development and the value of self-respect everywhere and the groundwork for their absolute establishment, gives me immeasurable delight. Though the Justice party was formed with these objectives, they actually spent more time in political affairs rather than in such noble tasks.

The Justice party leaders showed much interest in minor political advantages and concentrated less on such noble missions. Brahmins who had already grabbed political freedom, felt a thread to their comforts. Hence, they chalked out schemes to sabotage the Justice party with their ulterior motives. They created numerous obstacles and troubled the Justice Party cadres by malicious schemes. Since brahmin coteries became an unbearable pain in the neck for the Justice Party, the objectives remained unfulfilled.

Our people proved that they are in no way inferior to other communities. But they used to serve upper caste people like slaves, doing several mean jobs – such as manually providing breeze, watering the plants, mailing letters and parcels, shopping and baby-sitting, sanitary maintenance, driving horse-drawn carts etc. It was believed that our people are fit only for such mean jobs. Brahmins had kept our people in such a deplorable condition for a long period.

With the passing of time, our people woke up and mellowed. They discarded their degradation and proved that they deserve placements in government offices. Our people gradually rose to the level of high court judges, administrative officers and even ministers. Our people proved to the world that they are self respective. They pushed brahmins to the low-ebb of alm-seekers.

However, the services by our people to the common men are inadequate. There is still a long way to go. The Justice Party has now acquired two ways to achieve the objectives.

i) When they were in power, baseless charges were levelled on them. Some non-brahmins were also instigated to create troubles. Hence, this is the right time to prove their capabilities.

ii) The Justice Party could now contest elections. By dedicated field-work, the party can earn the trust of the common public.

The Justice Party can revitalise its energy and revive its former glory by vigorous activities. This is my belief today. Non-brahmins must not miss this opportunity. They should make use of the golden opportunity by collective efforts. To propagate our objective, leading newspapers and journals should help us and your support is required to strengthen them in turn.

To make people understand Gandhi and his policies, 20000 copies of “Young India” and 30000 copies of “Navajeevan” journals rendered propagating services thought a corpuse of rupees one crore was available. If a sum of rupees one crore is available today, Gandhi could capture Congress once again. He would be able to dominate again and spread his policies. What I imply is, that without financial assistance from well-wishers and without the patronage of newspapers and journalists, nothing can be achieved.

Many millionaires are there amidst us. More than ten millionaires and billionaires are around us. But they are least bothered about these vital issues and burning problems. In spite of overflowing wealth these rich people shudder at the very sight of even an ordinary revenue inspector. Most of these people address brahmins as “Swami” and stoop in an unabashed manner.

The arrogant and crazy land lords foolishly think that the rich people in this country are the sons of goddess Lakshmi, who is believed by gullible people as a wealth -pouring, Goddess. When would these people come out of the darkness of their ignorance? How can they be sure that their forthcoming generations could be the beneficiaries of the wealth amassed? Even if they pile up wealth above wealth, own large bungalows stack lakhs and lakhs of rupees, acquire vast lands and grab coveted jobs – one day when they vanish from this world, even an uncouth little brahmin boy would look at the rich men in contempt and murmur – “You are inferior to me!”

Respectful Panagal King is here amidst us. For several generations be would he hailed as a royal family members. He may be a great Sanskrit scholar wearing a sacred thread. He may be honoured with numerous traditional titles and felicitations. Even for a long period of 94 years he may serve as a minister. In spite of all these – he would be degraded as “Sudra”. He would be humiliated as the son of a brahmin’s concubine. He would be degraded as a slave and denied the right to master the Vedas and Vedic scriptures. He would be prevented from entering a temple and worshipping. He would not be allowed to sit beside a disgraceful brahmin and consume food. You must be able to foresee all these, which are likely to happen to the King of Panagal.

Almost all great philanthropists would be degraded as ‘Sudras’ in future. Should we annihilate this first by giving top priority or should we remain dreaming of the post of ministers? Which is more important?

‘Brahmins have been degrading us for thousands of years. The time is now ripe to wipe off this disgrace. Do not miss this opportunity for redemption and emancipation. If would be too late if you do not wake up at least now. Avoid repenting later.

The world has heard our voice which is loud and clear. Even most of the brahmins are ashamed of their past wickedness. They have begun to regret their malicious deeds and act of social injustice.

Opportunity Knocks Only Once

Do not forego this ripe moment strengthen our hands by a collective consciousness. Those who can afford, may please generously contribute financially for our movement. Those who are able to buy their own copies, may please buy our journal regularly to augment its circulation. If you can do nothing for us, at least do not prostrate at a brahmin’s feet and degrade yourself. That is really enough.

Never wash the filthy feet of a brahmin. Never gulp the water used clean his feet. Get rid of the insane belief that your parents or your children would attain salvation by offering money to a brahmin and showing senseless veneration.

At least avoid the ridiculous idea and ignorant thought that you have to worship god through a brahmin mediator. Do not make brahmin priests unauthorised touts. “Swarajya” without “Self-respect” is like the broken eye of a needle.