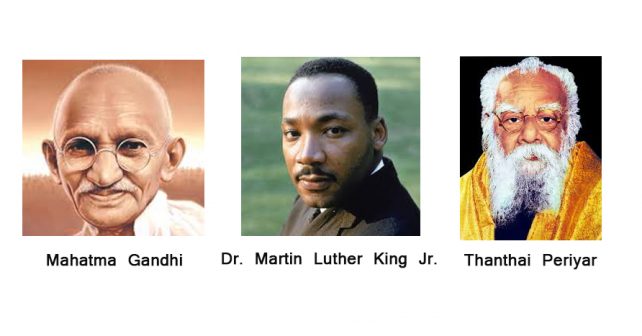 Thanthai Periyar (1879-1973) Mahatma Gandhi (1869-1948) and Dr. Martin Luther King Jr. (1929-1968) fought against the discrimination among human beings based on their birth.  All these leaders strove for equality.  The ways and means adopted by them were different in their own way.  Mahatma Gandhi restricted himself with the removal of untouchability but at the same time supported ‘varnashrama dharma’, the so called divine dictum ordained in the name of god that divided the people in the society into four fold divisions.  How would it be possible to wipe out the disease by nurturing it simultaneously?

Dr. Martin Luther King Jr. who strengthened the civil rights movement in the USA for equality and equal opportunities to the Whites and the Blacks through non violence means, expressed openly that he had followed Gandhian method. Dr. King Jr. did not comment on the divine force that remained as passive spectator of the discrimination practices of the Whites against the Blacks. Moreover, King himself served as the pastor in a Baptist Church.

But Thanthai Periyar went to the root cause of social disparities and attacked them by sheer propaganda, devoid of any violence.  In fact the method of Periyar was not ‘non-violence’ but ‘not violent’.  Periyar understood the entire gamut of social problem and fought through proper way and means from the beginning itself.  When Gandhi was a strong advocate of varnashrama dharma, Periyar opposed it vehemently.  Gandhi advocated for separate drinking-water wells for the untouchables, which again was a discriminatory practice.  But Periyar advocated one and the same well for all the people in the society.

Periyar questioned the practice of ‘Separate but equal’ of Gandhi. In that way on the basis of ideology and approach Periyar and Dr. King are alternatives to the cause of equality of human beings in their respective societies.  Both of them did the social task without any violence but by sheer protest, agitation, picketing and being prepared for imprisonment.  Periyar commenced his public life well ahead of Dr. King who was born in 1929. By that time, Periyar had founded his Self Respect Movement and organised the first state level historic Self Respect Conference in 1929.

According to Periyar’s approach, untouchability cannot be eradicated unless castes are eradicated. But Gandhi’s advocacy was self-contradictory because he argued for eradication of untouchability without insisting on eradication of castes. If analysed Periyar’s view should have obviously made a greater impact on Dr. King and inspired him, because it was not paradoxical like the view of Gandhi. During his visit to Chennai (erstwhile Madras) in 1964. Dr. King did not meet Periyar.

Dr. King was over shadowed under the umbrella of Gandhi who had to change the earlier advocacy and commented directly on the social oppressors which Periyar had been carrying out from the beginning of his public life. Treading on the correct path in public life gets missed in respect of popular leaders too, but Dr. King avoided the paradoxical path of Gandhi and took the path of Periyar.