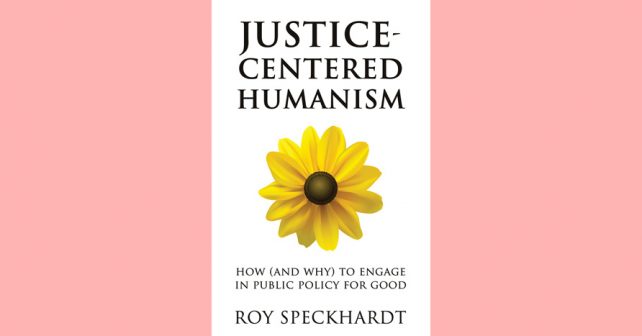 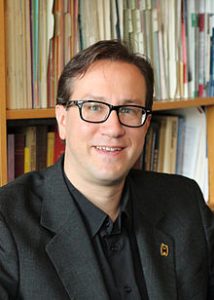 Roy Speckhardt
Executive director of the American Humanist Association since 2005

Once prejudice against nontheists fades away, religious favoritism is removed from government, humanists are appreciated for our kind and reason-based thinking, then humanists everywhere can begin to focus full-time on promoting our science-based, compassionate, and egalitarian vision for our world. But we can’t wait until such a day dawns; we must assert ourselves today to make a difference in as many ways as possible, even if we have not yet realized many of our longstanding goals. To delay action on other fronts, when action could improve lives, would be to negatively impact the fates of many. This isn’t an acceptable course.

As humanists become more widely recognized as a group that prizes ethical principles and scientific knowledge, they should use what leverage they have to ensure that human and civil rights are extended to all and not just to the few. If we want a better world, we humans are the only ones to do it. This is an opportunity to matter, to impact the course of history for the better, and to improve the story of humanity.

While many humanists embrace social justice work without hesitation, it’s worth mentioning that all aren’t on board. Some folks characterize social justice work as a kind of toxic identity politics that narrows perspectives and leaves reason and debate behind. That is a mischaracterization, but it does have its source in valid concerns. As journalist He Zhao wrote for Medium, “Fundamentalist social justice focuses on calling-out individuals for inadvertently reproducing oppression, on berating and ostracizing them for using offensive words and having wrong opinions, rather than on the understanding and dismantling of oppressive structures which shapes beliefs and behavior.” This criticism is somewhat unfair as folks can speak out against racist and sexist language and work on structural problems at the same time, but as Zhao continues, some social justice advocates “can be overzealous, dogmatic, and judgmental. Their voices can be shrill, and sometimes become tragically exclusionary (which paradoxically hurts the movement itself); but understandably so: for the first time some victims of oppression have any voice at all.”

This isn’t surprising really. Beyond those who exercise their right to their oppression-sourced anger, every movement and social group additionally has its uncompromising, dogmatic individuals who focus more on tearing structures (and people) down than on building a better future for everyone. But the bulk of those who seek social justice are simply seeking fairness for those groups in society that are still getting a bad deal today. They work toward an equal playing field for everyone, an end in which humanists can naturally see value.

For some, it’s challenging to evaluate whether social justice-related concerns are rooted in strong foundations or weak dogma, but we perform better if we acknowledge our privileges, set aside explicit biases, do what we can to recognize and overcome implicit biases, and address our own fragility when it comes to self-analysis.

While our reason-based approach exposes the challenges that exist in life, suffering is not our guidepost. Rather, humanists wonder at the possibilities before us, delight at discovery, and constantly soak up the meaning imbued in both our individual and shared life experiences.

Explicit racism, sexism, and the like are both conscious and overt. It tears at the hearts and minds of humanists and others who embrace egalitarianism. Implicit racism is more subtle, less galvanizing, and can be unconsciously perpetrated, but that doesn’t make it any less pernicious. Implicit bias remains hard to change, but new ways to address it are being considered all the time. Implicit biases impact all kinds of judgments from those a jury makes to those a hiring manager makes. Test your own implicit bias about race as well as age, religion, and other factors online with the Harvard implicit bias test.

Robin DiAngelo, a lecturer at the University of Washington who spoke at the AHA annual conference in 2017, coined the term “white fragility” to address a counterproductive behavior commonly seen in dominant culture. DiAngelo explains, “White fragility is a state in which even a minimum amount of racial stress becomes intolerable, triggering a range of defensive moves. These moves include the outward display of emotions such as anger, fear, and guilt, and behaviors such as argumentation, silence, and leaving the stress-inducing situation. These behaviors, in turn, function to reinstate white racial equilibrium.” This could also apply to other situations resulting in male fragility, hetero fragility, and the like. Without being confined by attempts to cater to white/male/hetero comfort, it makes sense to seek strategic approaches that are the most persuasive ways of prompting change. It’s worth remembering that as actor Jesse Williams said at the 2016 Black Entertainment Television (BET) awards, “The burden of the brutalized is not to comfort the bystander.”

Bringing this up now is especially important as some information that follows may challenge your assumptions about how free you are from the -isms that are all around us in this culture. After all, as I’ve heard said, though unattributed, “When you’re accustomed to living with privilege, equality feels like oppression.” In fact, while bigoted speech and action often come before the myths used to justify such actions, we can head-off those actions first, both so that we act better and so that we don’t unconsciously reinforce bias in our own thinking. By recognizing our own defensiveness for what it is, we may be able to push past it and better ourselves in ways that help us to better our culture.

Social justice advocacy involves respect for the equality of all people, compassion for their dignity and welfare, and a conviction that positive change requires human intervention. We shouldn’t have to struggle to see women and minorities as humans, and thus a natural focus for humanist activism. Ideally, we take an intersectional approach to pursuing social justice. According to Webster, intersectionality “refers to the complex and cumulative way that the effects of different forms of discrimination (such as racism, sexism, and classism) combine, overlap, and yes, intersect—especially in the experiences of marginalized people or groups.” This fits with our humanist understanding to the point that it’s almost foundational to humanism itself. Humanists pursue a way of thinking that we are convinced is more positive and effective, not just for ourselves, but for all in society, particularly marginalized groups.

This can be applied in a number of contexts, such as addressing the myths of meritocracy. We aren’t living in the meritocracy some folks may think this is. We know the accident of where we are born and to what sort of parents we are born dramatically limits our chances or opens doors of opportunity. Inheritance laws, prejudicial advantages, class barriers, glass ceilings, and many other factors also direct us toward success or failure in our endeavors. Without removing personal responsibility for our actions, we will cultivate better empathy and compassion for others in society if we understand that we don’t all have the same prospects. Just as the successful don’t always necessarily achieve that success on merit, neither do the unsuccessful always necessarily achieve their state due to lack of merit. Recognizing this frames our understanding and need for pursuing social justice.

If these conversations make you feel uncomfortable, embrace it. Feeling uncomfortable and awkward are signs that real internal change is being confronted. There’s no reason to feel embarrassed that you have progress to make on social justice issues. We all live in a society where the norms work against us on such topics, so it would be surprising if even the most conscious and enlightened folks didn’t still have work to do in some areas. Doing that good work helps us become better allies, and we can strive to be more than just good allies on the periphery who provide moral support. We can also be good accomplices and co-conspirators with those activists on the front lines. We can stand with them, speak with them, and even risk arrest with them when engaging in civil disobedience for good causes. As University of Baltimore professor emeritus Lenneal Henderson said during a February 2019 Baltimore Ethical Society platform speech, “There’s no shame in being who you were. There is shame in failing to evolve from where you are.” We’re living in a time when our commitment to personal growth and our involvement in collaborations can make a difference.