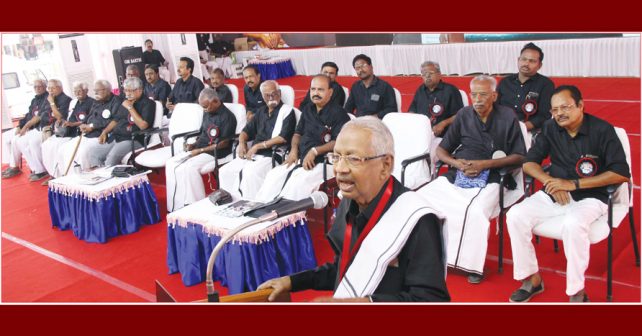 (Excerpts from the speech delivered at Social Justice Conference, organized by Dravidar Kazhagam on 24th February 2019 at Thanjavur)

Self Respect movement which was started in Tamil Nadu by the global leader Thanthai Periyar is required everywhere in the world where there exists inequality caused by birth or otherwise, to function as a missile to oppose the citadels of inequality.

I recall the day when Kalaignar M. Karunanidhi as the Chief Minister wanted to install the statue of Raja Raja Chola who had constructed Periya Kovil within the temple premises, the Archaeological Department of the Government of India refused to give permission. Undeterred Kalaignar installed the statue outside the premises. Later referring to the incident I said that those who construct the temple would always be kept out of it and those who did not work would be inside. Kalaignar, I said, had made the monarch stand outside as a sentry only to reveal the bitter truth. Kalaignar enjoyed my interpretation with a hearty laughter.

I recall another incident, in 1979 MGR introduced an income ceiling of Rs 9000 per year for the backward classes to claim reservation. When I explained that it was an improper move, MGR did not listen, He was adamant. Then we started agitations against it, along with all the parties that were in the opposition. We set fire to the government order in question and mailed the ashes to the Chief Minister. The only State in the whole of India where reservation policy assuring 69 per cent of reservation is constitutionally protected through the 76th amendment which had been included in the IX Schedule.

Thus we keep on progressing with propaganda on one side and agitation on the other. The government at the Centre headed by Narendra Modi is engaged in gimmicks to hide its failures. They have now introduced the 10 per cent reservation for the other category communities, with the sinister aim that the foundation of Social Justice might be shattered. Never in the history of free India had a constitutional amendment act been passed in such a hurry. Should not the AIADMK which is ruling the State be ashamed of bring subservient to such a government?

We have always been staunch supporters of Social Justice principle. After Kalaignar M. Karunanidhi became the Chief Minister, he raised the percentage of total reservation from 41 to 49 at the instance of Periyar. After MGR’s fixing up of a ceiling of income for claiming reservation and the subsequent debacle of his party in the parliamentary election that followed, he patiently listened to my reasoning and rescinded the controversial order. Besides, he raised the reservation percentage for backward classes from 31 to 50.

There is not a single backward class candidate working in the President’s office. Though the President himself comes of a depressed class, all the IAS and IPS officers functioning in his office are from higher castes. Moreover, there is no reservation in the private sector.

On school students and even college professors are not fully aware of the reservation policy and the need for it. Among the 31 Judges in the Supreme Court, there is not even a single one belonging to the depressed classes. There is only one state where there are a good number of judges from the depressed classes, and that is Tamil Nadu.

Now, Modi government has taken away the chances of backward class people becoming district judges. They are converting all public sector undertakings into private ones. We have got a responsibility to oppose such actions.

Jawaharlal Nehru, the Prime Minister, proclaimed in the Constituent Assembly, “This Assembly declares its firm and solemn resolve to proclaim India as an Independent Sovereign Republic…Wherein adequate safeguards shall be provided for the minorities, backward and tribal ones and the depressed and the other backward classes”. They came to power only after making such promises. But now what little has been available to us is being taken away.

Theref ore, it is the alliance led by the DMK that will protect Social Justice if it gets into rough weathers. Please do not vote without knowing all its implications. Your vote is going to decide the welfare of the future.