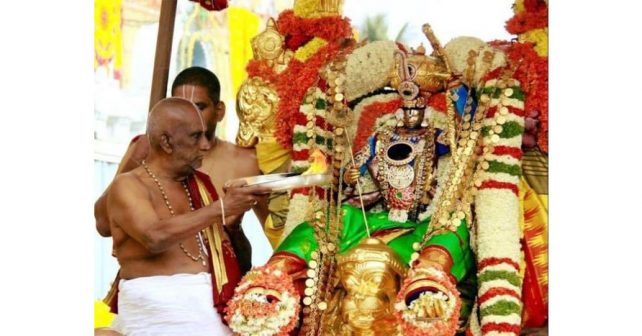 Periyar Movement is unique both in its ideology, and enabling the translation of it in practice. All humans are equal by birth. There cannot be any sanction for discrimination or denial by any authority or power of any nature. But in our land, religious sanction has been imposed for restriction to many a sections.

The lowly graded downtrodden sections viz. Sudras and Panchamas cannot walk in the public streets freely. Animals like dog, pig can trespass the streets but not the downtrodden humans. If they use, the streets would be polluted for other sections to walk on it. Periyar’s struggle started in 1924 for the opening up of the streets surrounding the temple in Vaikom, Kerala that ended in historic success as first human rights agitation in the country. Big towers were constructed in temples to restrain those sections from entering the temple. The design was to pray to god by viewing the tower as ‘darshan’ outside the temples. Temple entry for them was started by the cadres of Self Respect Movement of Periyar who agitated in temples at Thiruvannamalai, Myladuthurai and Madurai (1939). Periyar made continuous propaganda to make the entry denied devotees to realise their self respect. The self-respect of the devotees was realised widely and by mobilising them to the attention of the ruling government in Madras Province.

As the next move of ensuring social justice in temples, in 1969, Periyar announced the agitation for the appointment of archakas in the sanctum sanctorum of temples which remained as the monopoly and privilege of only brahmins. Kalaignar M. Karunanidhi who was the chief minister then, met Periyar and appealed him to suspend the agitation. It was promised by him that at the earliest his government would issue necessary government order (G.O.) for the appointment.

Accordingly, in 1970, a G.O. was issued against the implementation of which the brahmin archakas organisationally went to the Supreme Court. The Supreme Court stayed the implementation of the Tamil Nadu G.O. The Supreme Court delivered the judgment stating that as per the G.O. archakas from all castes can be appointed in the temples under the control of HR & CE department. But such appointed – archakas must have been trained and well versed with the ‘agamas’ prescribed for the temples. Besides, the apex court upheld the discontinuance of appointment of archakas in a hereditary manner.

During the period of M.G. Ramachandran (ADMK) as CM, a committee was appointed with Justice Maharajan as chairman. A committee was formed under the chairmanship of Justice Krishnaswamy Reddiar to work out the modalities for the appointment of archakas from all castes.

In 2006, when Kalaignar again became CM, his first signature was to issue the G.O. for opening of agama training schools. A committee was appointed under the chairmanship of Dr. Justice A.K. Rajan. One of the findings of the committee was that many of the brahmin archakas were not familiar with the agamas. They have been performing poojas in the temple hereditarily. Agama training schools were started to teach both saiva and vaishnava agamas and train archakas. A total of 208 candidates graduated and got the ‘deeksha’ and waited for appointment. The Sivachariar Association of brahmin priests from Madurai Meenakshi Amman temple filed writ petition at the Supreme Court and got stay for the appointment of such trained archakas.

On 16th December 2015, the judgment was delivered with no restrain on the appointment of archakas as per agama prescription. From then onwards Dravidar Kazhagam appealed to the State government for the trained archaka appointment and many a time conducted agitation for it. In April 2016, DK conducted picketing at the Directorate of HR&CE, Chennai and about 5000 cadres were arrested. At Madurai, two trained archakas hailing from the castes other than brahmin were appointed as archakas by the local temple trusts. No initiative for appointments of archakas was carried out by the then rulers of the State.

At last, the year long struggle manifested in success. In May 2021, the DMK, mandated by the people of Tamil Nadu came to rule the State with M.K. Stalin as the chief minister. On 14th August 2021, the 100th day of the rule, Chief Minister M.K. Stalin with great commitment for social justice appointed 58 trained archakas from agama government training school and other padasalas besides a unique appointment of a trained woman, as the First odhuvar (invocation of prayer songs) in HR&CE temple. The ideologies of Periyar, his dream, by continuous battles waged by Dravidar Kazhagam, became a reality. The concern of the disciple of Periyar, Kalaignar M. Karunanidhi as CM was let out at the funeral of Periyar thus: “Though DMK Government was able to pay respect with State Honour to Periyar, we were pained to lay the body at rest without removing the thorn in the heart of Periyar (without fulfilling the appointment of trained archakas hailing from all castes).”

The long drawn war for equal rights has been acquired; but the monopoly cult in the temples again approached the court with the intention to stall the move. The newly appointed trained archakas have reported duty at the respective temples, assumed the assigned responsibility and started to perform ‘poojas’ by chanting mantras.

Periyar and the cadres of the movement founded by him are atheists. But the movement fought for wiping out the caste degradations of the people who are believers. There should not be any disparity in the religious opportunities and treatments to such believers. The unique feature of Periyar’s atheist movement has been fighting for the cause of believers as per its ideology i.e. all humans are equal.