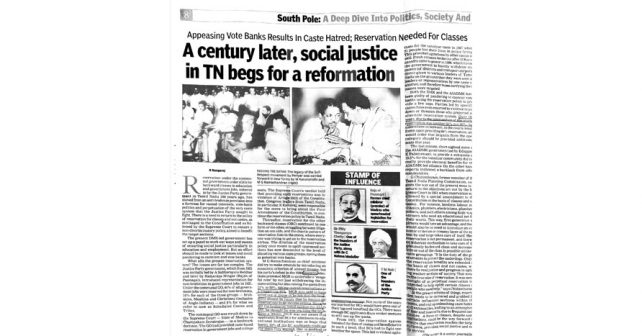 This has reference to the article by Thiru. R. Rangaraj in the South Pole Column of The Times of India dated 21st September 2021.

The contents of the article are entrenched with the Comissions of specific and vital contributions, Dravidian movement made for social justice in Tamil Nadu that have significantly influenced the rest of the States in the sub-continent.

The beginning of the article misleads that the communal G.O. envisaged by the Justice Party was meant for backward classes. It was inclusive of all the communal sections with representation. It provided reservation for the upper castes including an exclusive share for brahmins. The major chunk of reservation for whom reservation was provided was covered as Non-Brahmins in the Communal G.O. and not exclusively as backward classes. The term, ‘backward classes’ found its place in the subsequent G.O. issued when Omandur P. Ramasamy (Reddiar) was the premier of the then Madras State in 1947.

In the communal G.O., 16 per cent representation was provided to brahmins who constituted less than 3 per cent in the population and 44 per cent for non brahmins. It was segregated later into backward classes, who alone constituted 52 per cent share in the total population. This is the gap in the due reservation for the deprived sections and excessive dispensation to the privileged. To implement that limited and inadequate reservation for the oppressed, the Justice Party had to strive hard for issuing 3 communal G.Os. The former two remained only in paper and the third one came for implementation in 1928. Hurdles started in the beginning continued which are still being put forth by the reservation antagonists.

The communal G.O. was challenged in 1950 as if the provision of communal reservation was in violation of Article 29(2) of the Constitution. Invalidating the G.O. is pointed out in the article as a land mark decision. Land mark decision to whom? Privileged castes or under privileged castes? After the Supreme Court’s verdict, the Law Minister Dr. B.R Ambedkar (chairperson of the Drafting Committee of the Constitution in the Indian Constituent Assembly) explained that the provision was not fully understood as per the verdict. The meaning of the word ‘only’ in the Article 29(2), ‘No citizen shall be denied admission into any educational institution maintained by the State or receiving aid out of State funds on grounds only of religion, race, caste, language or any others’, has not been understood properly.

Had it been understood properly, the verdict would not have come like that.

No reservation/ has been implemented pre and post-independence, based only on the criterion of ‘caste’. The identity of caste is not an identity of equality. More than the name of the caste which appears superficially, the degradation, humiliation, suppression, oppression and denial of certain human essentials and necessities attached to it. The caste identity and privileges of the so called supreme sect: Brahmins, cannot be equated to the caste identity of the persons who are still engaging themselves in removing human excreta manually in public. Reckoning the mere caste identity will not serve the dispensation of social justice.

Moreover, the petitioner who had challenged the communal G.O. in 1950, Champakam Durairajan, a brahmin lady, had not applied for M.B.B.S. admission at all. But still she had stated that she was denied ‘admission’ due to the communal G.O.

Primafacie, the petition would not have been admitted since there was no locus standi for the petitioner to file the case, as aggrieved by the Communal G.O. As per the Communal G.O. reservation was also provided for brahmins. In reality all the persons who belong to the reservation categories would not get admission. How could it be possible for a candidate who had not applied at all for the medical course, to be denied admission due to the communal G.O.

After the communal G.O. was invalidated by the apex judiciary, the provision for social justice was brought back by the insertion of Art 15(4) through the First Constitutional Amendment. It did not happen simply due to the political move from the Madras state. A massive agitation was called for by Thanthai Periyar throughout the State mobilising public anger and protest against the invalidation of the Communal G.O. Communal reservation is the birth right of the people who suffer due to birth-based discriminations. Arignar Anna as leader of DMK fought organisationally for the cause. All these state wide protests and pressures made the rulers of the State approach Union government to bring a Constitutional amendment.

While introducing the Bill in the Parliament Prime Minister Jawaharlal Nehru had mentioned that certain happenings in the Madras state had compelled the government to bring the constitutional amendment inserting Article 15(4). The communal reservation became applicable to the whole country where as the communal G.O. was confined to the then Madras state. The role of the Law Minister Dr. B. R. Ambedkar at the Union government and the then President of Tamil Nadu Congress Committee K. Kamaraj were significant and influential to bring the amendment.

The article says that MGR was not aware that applicants from BCs for admission to educational institutions was so huge that barely 10 per cent of the BC applicants could get the seats they wanted, like in medical or engineering courses. Yes, naturally the BC applicants would be more in proportion to their population. By highlighting the points that curtail the total reservation from 69 per cent to 50 per cent the inherent anti social justice views have been ventilated throughout the article.

Is it suffice to publish the photos of Thanthai Periyar EVR, Kalaignar Dr. M. Karunanidhi and Asiriyar Dr. K. Veeramani without narrating their contributions to the cause of social and justice and, without acknowledging their role in the systematic improvement in the reservation policy? The ideological guidance and endeavours made by Dravidar Kazhagam’s President, Dr. K. Veeramani to protect the total reservation of 69 per cent is pioneering for the rest of the States that include BJP ruled States to enhance their total reservation above the impracticable ceiling. The article is biased with the notations, – “it was said”, – appeasing of brahmin vote bank (that constitutes only 3 per cent of Tamil Nadu population) in bringing the unconstitutional income criterion for BC reservation, without empirical evidence.

It is high time to ensure the effective implementation of reservation to the oppressed sections, as enabled by the Constitutional provisions. Implementation through monitoring committee as announced recently by M. K. Stalin, Chief Minister of Tamil Nadu has to be the agenda of the Union government also. The words ‘Begging for reformation’ in the caption is a diluting and distorting endeavour. In fact, it is not reforming social justice but deforming!

The title of the article, ‘Reservation Needed For Classes’ has no relevance at all to the social context of the sub-continent. The occasions, whenever the judiciary expressed anything negative on the existing reservation policy of the State have been highlighted. The same judiciary has observed, ‘in the Indian context the Classes are nothing but Castes’. The ultimate yardstick for ensuring reservation right to the respective deprived section is caste. Without reckoning the caste factor, the dispensation of social justice cannot be meaningful. Reckoning caste in the reservation policy is not perpetuation of the existing graded caste system but to bring all the castes on equal plank without gradation. During the course of the journey of social justice, a stage would emerge where all caste identities would become equal, devoid of any sort of inequality and gradation among them and substantive equality aimed would prevail upon. Prior to that stage, pulling the leg of social justice chair with unauthenticated narration, distorting castes into classes as reformation shall not serve the purpose.

Social justice dispensing model of Tamil Nadu is pioneering and path breaking for the country and that cannot be degraded as if it ‘begs for reformation’.