Social Justice in the Span of THREE Centuries 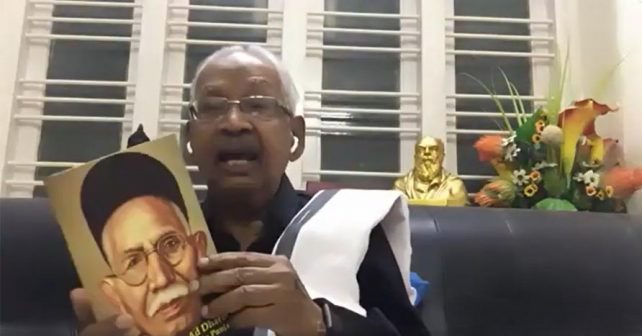 The political history of Indian sub-continent has been documented by various historians on many fronts, but not so the social history and social revolutionary history that took place very silently for many centuries has not received the same importance in documentation. It has been documented in bits and pieces without covering the whole sub-continent.  This is not mere failure on the part of historians to be blamed. The documentation of the enduring struggles of the indigenous for social liberation from oppression continues to face several hurdles. An individual historian alone cannot fight against such hurdles. An organised scholarly movement is needed with the real participation of historians who hail from the oppressed sections.

Periyar often said, ‘Let me commence the task; whoever is committed to the cause, join and render their services’.  The current leader of Dravidian Movement and the ideological disciple of Periyar, Asiriyar Dr. K. Veeramani, President of Dravidar Kazhagam has commenced a series of lectures on, ‘Social Justice in the Span of THREE Centuries’ through virtual meet during the Covid-19 pandemic period.  In every lecture, the brief history of the social liberation movements and the sacrifice made by the social warriors who were not sung sufficiently and suppressed in the history.  The lecture series covers every part of the sub continent.  So far EIGHT lectures have been delivered by Dr. K. Veeramani, of which one covers the role of Mangu Ram Mugowalia, the social justice stalwart of Punjab.  He was the contemporary of Periyar EVR and Babasaheb Ambedkar.

Periyar arranged to send a telegram on his behalf, while he was on a tour in European countries in early 1930s, to Dr. B.R. Ambedkar not to accede to anything in the name of Poona Pact 1933,  the rights of the millions of the voiceless people of our country.  Mangu Ram also appealed to Dr. B.R. Ambedkar not to sign the pact.  But the social oppressors did not allow Dr. Ambedkar to act independently and he had to accept for the Pact when the oppressors ultimately used the life of Gandhi as the trump card.  Reckoning the safety of the down trodden masses, who were not aware of their rights and lack the spirit to fight organisationally,  Dr. Ambedkar had to sign the Poona Pact. Had the downtrodden people enlightened been as of today, the social history that includes the political history also would have been different.

Asiriyar Dr. K. Veeramani has intended to dig out the hidden history of the suppressed so that the posterity would live in their homeland with due self respect.  The plan is on the move to bring all these lectures in book form both in soft and printed formats, so that the voiceless masses would jointly raise their voice for the cause of their liberation, at least with minimum right to live and be allowed to live as humans.