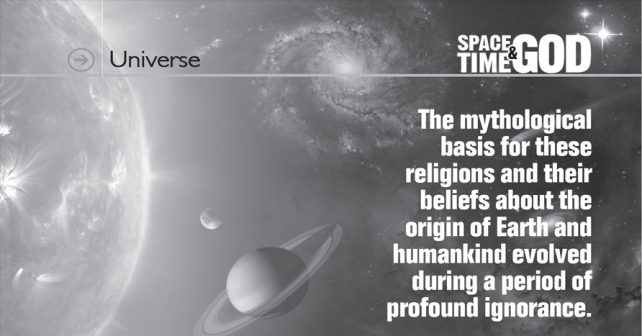 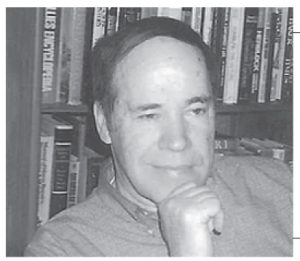 Laurence W. Britt
Retired international business person, writer,
and commentator.
He is the author of “Fascism, Anyone?”

When the prehistoric human race emerged from the Neolithic period and slowly began to form social structures, a new era began in the development of our species.  The constant struggle for food and survival abated somewhat, allowing the human intellect to move to a higher level.  For the first time in Earth’s history, a living creature could contemplate its own existence and wonder; why are we here, and where did we come from?  These ancient peoples had no means of determining the answers.  Since there was no ready explanation for the Sun’s daily rise and set, or why great storms occurred, or why crops sometimes failed, myths and the worship of deities developed to explain these baffling mysteries.  Multiple deities eventually gave way to monotheism, first with Judaism and later with the development of Christianity and Islam, with their often-compulsory belief systems.

The mythological basis for these religions and their beliefs about the origin of Earth and humankind evolved during a period of profound ignorance.  Early sheepherders looking at the sky at night imagined that everything they saw was just a few miles above them.  Human misfortune was attributed to the anger of god.  Natural forces could not be comprehended, let alone explained.  The holy books of these religions were written by largely unknown authors with the knowledge base of the time, which is to say with no knowledge of natural forces. With this level of understanding, the ancient peoples evolved their religions, and over the millennia they became powerful institutions controlled by a chosen few human beings, not by the imagined god.  Though these institutions the advance of scientific understanding was usually resisted, whether it was rejecting the Earth-centered universe or the theory of evolution, right up to present times in opposing stem-cell research.

The concept of God as the all-knowing and all-seeing determiner of human existence comes up against an enormous logic trap when fully just juxtaposed to the simple understanding of the natural universe.  This understanding has only come about since the early 1900s, when the science of cosmology developed and was amplified by such figures as Einstein, Hubble, and others.  The size and age of the universe now can be demonstrated and understood as never before.  This understanding is a staggering and humbling revelation for the human race – or, at least, it should be compared to the simplistic explanations offered by the world’s fundamentalist religions.

First, let’s consider the logic test of size.  Imagine Earth is the size of an ordinary pea, a quarter-inch in diameter.  On this pea huddle all the 7.5 billion humans with their hopes, fears, and dreams, living their lives with proverbial quiet desperation, with the believers counting on their god to watch over them and properly tote up the score of their lives.  Two hundred forty-two feet from this pea is the Sun, the size of a basketball.  Approximately 1.8 miles away is the outer edge of our solar system.   About 2,500 miles from there is the nearest star.  Remember to compare that to a quarter-inch pea.  Now things really begin to get mind numbering. Stretching out a distance of sixty million miles is the Milky Way Galaxy with a hundred billion basketball suns slowly rotating in gigantic spiral arms.  Imagine that quarter-inch pea with its human cargo circulating in that immense space.

But that’s just the minimal beginning of the journey into the vastness of the universe.  Approximately 500 million miles from the outer edge of the Milky Way is the nearest local galaxy.  Modern cosmology has estimated that the universe contains at least two hundred billion galaxies, some so distant that their light takes billions of years to reach us.  Pea-sized Earth compared to this vastness would be akin to a single atom compared to the entire Earth.  To the believer, the all-powerful and all-knowing god is in control of this incomprehensively immense universe: presiding over the birth and death of stars, super novas, black holes, quasars, planetary formation, and the lives and fortunes of the creatures residing on this minute pea in an out-of-the-way spot in one of two hundred billion galaxies.  It is a staggeringly unlikely reality.

Then there is the time element.  The sciences of geology, astronomy, and chemistry have evolved to the extent that the age of Earth can be determined with a high degree of confidence to be approximately 4.6 billion years.  God waited a long, long time to reveal himself to humanity or even to create humanity.  Large numbers cause the eyes to glaze over.  What is a billion years anyway, let alone 4.6 billion?  To make it simple, let’s reduce 4.6 billion years to one year, compressing things as we did with the pea example.  Let’s begin by supposing that Earth formed in January 1.

Sometime in April, the first single-celled bacterium developed.  Until October, that was the only life on Earth.  Around mind-October, multi-celled organisms slowly developed.  By early November, a great abundance of plant and animal life had evolved, mostly in the oceans, but it gradually adapted to the land.  Around December 15, the age of the dinosaurs began.

On December 26, the dinosaurs disappeared, opening the door for the clever mammals.

The first traces of the cleverest of mammals, humanoids, appeared at around 10.00 a.m. on December 31.  The Neanderthals arrived at eight minutes before midnight.  The world’s great religions started twenty seconds before midnight, and most of mankind’s scientific revelations have occurred one second before the end of the year.  What was God waiting for and why? The obvious answer is that natural processes were at work all along, and the current state of the natural universe and life on Earth is the result.

To the secular humanist, our logic process does not allow us to ignore the evidence revealed by understanding the natural universe.  Why would a god preside over events on the miniscule pea adrift in the vastness of space or allow 31,535,980 seconds to pass in our hypothetical year, representing the entire life span of Earth, before revealing himself in the final twenty seconds? Why indeed?