Superstitions: A Bane to Progress 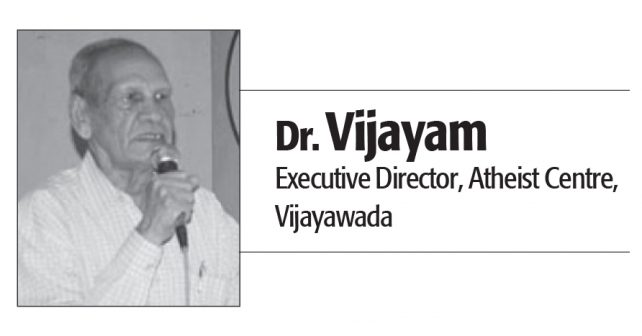 It is strange that in this 21st Century, when India is capable of launching satellites to the Mars and exploring the outer space with the spectacular advancement of science and technology, some people are still steeped in superstitions and blind beliefs.  They are still living in the bygone era of astrology, Vaasthu, good omen and bad omen and believe in the non-existent with craft and sorcery and ruin their lives.  They run around babas and so called god men and conduct yagnas and prayers.  They are victims of illusions and delusions of the supernatural and the occult.  It is a tragedy that even the highly educated fall a prey to the unscrupulous elements and get cheated.

Superstitions and blind beliefs stand in the way of the onward march of our society.  In the West also, they had many superstitions, but many of them lost their credence and influence over the public because of the spectacular progress in the fields of science and technology. The revolutions in religions and migration of people from one country to the other and interaction with people of different cultural backgrounds made people discard some of the superstitions and outmoded customs.

In the West, the Middle Ages were dubbed as the Dark Ages by historians, every aspect of life.  The Renaissance and Reformation helped to spread humanism and rational thinking.  Martin Luther challenged  the Church when Tezel, the high salesman of the Pope started collecting money for the Roman Catholic Church by the “Sale of Indulgences” (papa parihara patras). Perturbed by this, in Germany, young Martin Luther questioned it and pasted 95 theses, challenging Tezl’s high salesmanship. Luther challenged how anyone or god can pardon the sins of the princes and the wealthy men, even before they committed the crime.  How can God grant anticipatory bail to the prospective sinners! Martin Luther’s revolt had shaken the citadel of Roman Catholicism and the Pope’s authority.  Through his actions, Martin Luther turned people’s attention from the imaginary other world to the realities of the world. He stressed that “work is worship” and thus turned the attention of the people from the so called god to the materialistic world.  This attitude of questioning the papal authority helped the growth of science and paved the way for the Industrial Revolution, in the long run. But, it is a matter of great regret that India is still steeped in superstitions and blind beliefs and the people never questioned obscurantism. The pastoral and agricultural society of India continue to be complacent to the realities of the World and the people’s attention is diverted from attaining salvation and the comforts of the imaginary other world, the life after death. The belief in karma has emasculated the people.  They continue to live in the imaginary other world. Unlike in the West, where there had been conflict between science and religion, the prevalence of the caste system in India contributed to the structural violence. The perpetuation of superstitions became a convenient tool to oppress and suppress the people.  The structural violence sucked the majority of people to fall in line to observe the outmoded customs and traditions, irrespective of their economic, social and educational status.

The thought control of religions made even the educated to follow the unjust and unequal system.  Unlike in the West, where the Enlightenment contributed to change, the caste system became a convenient tool in India to perpetuate the rigid social structure which left vast majority of the people outside the purview of education and enlightenment.  Our education system in India made people literate, but not empowered them with the questioning spirit and scientific temper.  In India, knowledge and education became the prerogative of the upper echelons of the society and the rest of the people continue to remain steeped in superstitions and blind beliefs.  In fact, perpetuation of superstitions and blind beliefs became a convenient means of thought control over the vast majority of the people.

Some social reformers and social revolutionaries, tried to awaken the people and uplift them from the depths of degradation.  Kabir Das in North India, Vemana in Andhra, Basaveswara in Karnataka, and some others in different parts of the country tried to liberate people from mental slavery and tried to liberate them from superstitions.  They opposed idolatry, caste system, and social and economic inequalities.  In the 19th Century, social reformers like Mahatma Phule made determined efforts to fight social inequalities and tried to liberate people by imparting education, to women and to the weaker sections of society.  In the 20th Century, stalwarts like Periyar E.V. Ramasamy and Gora promoted atheism and rationalism with a grim determination.

Why superstitions persist even among the educated people? It is because they are not using their faculty of reason.  They are conditioned by the habit of custom.  It is a matter of great regret that, after independence to the Country, superstitions are still growing.  Politicians found perpetuation of superstitions is the most convenient tool to maintain the hegemony over people.  Instead of building schools and educational institutions for the poor and the downtrodden, politicians promise people that, they would build temples and churches or mosques to worship.

Perpetuation of superstitions is the most inexpensive form of social control and to keep people in subjugation. They know that superstitious minds do not question. Superstitions make people other worldly and docile. They do not rebel against the unjust system and submit to inequalities and injustices.  The growth of god men in India received internal and external support to spread superstitions and obscurantism.  In 1950s, American Political Scientist, Selig Harrison in his book, India’s Most Dangerous Decades, explained how God men are useful tools to the rulers to solidify thought control.  Even the Presidents, Prime Ministers and Ministers do not hesitate to fall at the feet of God man. The evolution of God-men from rags to riches and amassing of enormous wealth in post Independent India, reveal in unmistakable terms whose interests the so-called God men were serving. The psychology of superstition need an in-depth study and thorough probe of the sources of their income to show the nexus between God men, politicians, the business people and the some of the bureaucrats.

Superstitions and scientific temper are incompatible.   Belief in god, religious tenets and the belief in the miracles, the lure of salvation, provide congenial atmosphere for the perpetuation of superstitions.  Hence, it is imperative that, there should be continued effort for building an alternate way of life, free from religion and obscurantism.  When the principles of science are applied for the resolution of people’s day-to-day problems, then the scientific outlook will grow.  Separation of State and religion and strengthening of the secular ramparts must be kept in mind.  Blind obedience and blind acceptance of hearway will create the attitude of subservience.  Open advocacy of Atheism as a way of life is needed for the eradication of superstitions and obscurantist notions.  Caste itself is a superstition. The customs and traditions and obscurantist beliefs must be judged on the touch stone of reason.  The scientific method must be applied in solving day-to-day problems.  It is not enough if people use modern gadgets.  In the modern world, people are ready to accept technology to make their life happy and comfortable.  When they start questioning their belief systems with the inquiries of ‘What, When, Where and How’, and so on, people will come closer to critical thinking.  Superstitions do not stand the test of verification.

New society requires new value systems.  Scientific temper becomes a reality when people not only adopt science and technology, but also apply the scientific principles to their daily life.  When they do so, people’s attitude towards life will change. People realized that they are the makers of their systems and the institutions.  The critical examination of the system should be a constant process.  Eternal vigilance is the price of liberty.

In this age of Democracy, it is not coercion, but convincing others through persuasion will yield desired results.  The Nazi, Fascist and the Communist systems collapsed, because of their authoritarianism and forcing people to obey.  Social change cannot be brought by force.  There should be reasoning, critical thinking, constant dialogue and example.  Democracy survived for hundreds of years because of people’s acceptance of changes.  Equality is one sphere and inequality in other spheres cannot continue for long.  Freedom, equality, fraternity and justice – all these are interdependent and are intertwined.

In dispelling superstitions, education plays a major role.  Today our education system is failing to serve people’s needs.  Putting the ideals into practice is the necessary precondition for success.  People change when they see good example is placed before them.

Critical thinking, scientific temper and reason enable people to move away from superstitions. Superstitions which perpetuated for centuries will not disappear overnight.  It is a life work to fight superstitions.

Superstitions have economic, social, cultural and psychological dimensions and they make an impact on the minds of the people.  Will power, not force is the basis of social change.  Attitudinal change is a slow process.  For centuries superstitions conditioned the minds of the people. Liberation of people from the mental slavery is a necessary precondition for change.  Once people realize the futility of superstitions, they lose their credence.  Eradication of superstitions is a slow process as it aims at building a new value system, free from exploitation and inequality and injustice, Anti-superstition activities create new awareness among people.

Hence, the process of change will not take very long time as now we have modern means of communications – the electronic and print.  Media should not be allowed to be the monopoly of the rich or of the vested interests to perpetuate superstitions and blind beliefs.  Promotion of secular and scientific outlook is the need of the hour.  The efforts to promote scientific temper should touch every aspect of human life. New forms of social movements are needed to educate people on scientific lines.  Efforts must be made to inculcate awareness among people so that they become harbingers of change.

Secularization of society is a must.  We have enormous human resources.  It is the time to harness the abundant human resources with vision, determination and commitment for social progress.  An alternate way of life needed to be developed, as the whole world is moving towards a post religious society.